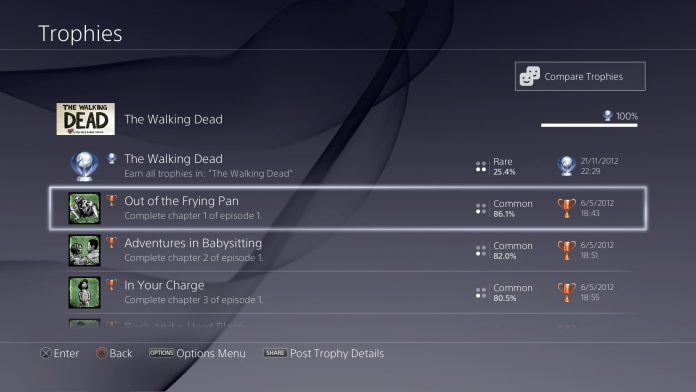 I was recently looking through the trophies for a game and thought that the rarity indicators seemed a bit weird. First of all I think the titles alone are a bit weird. Something that 25% of people have is definitely not rare, but these titles are irrelevant for the moment. My main issue with them was the percentage of people that have or have not obtained a particular trophy. I know some people don’t like trophies, but there are some trophies that are pretty much impossible to not unlock. If you even play the game for a few minutes you are bound to unlock a trophy or 2 in some games. I decided to check some of the easiest trophies I can remember to see what the ratios were and it doesn’t seem quite right, the trophy rarity system seems to be a bit off.

Eat Lead has some of the easiest trophies I have ever seen. There are 2 trophies that are super easy, 1 of which is pretty much impossible to miss. The easiest trophy is to literally start the game. As soon as you start the game you get the trophy “It’s HAZARD TIME!”, there is no way you can miss this trophy. There is another trophy just to press the pause button. As you can see in the image below. 98.1% of people unlocked one of the easiest trophies in all games. How? One might argue that this game sucks and the menu is enough to realize that the game sucks. So lets move onto some other games. 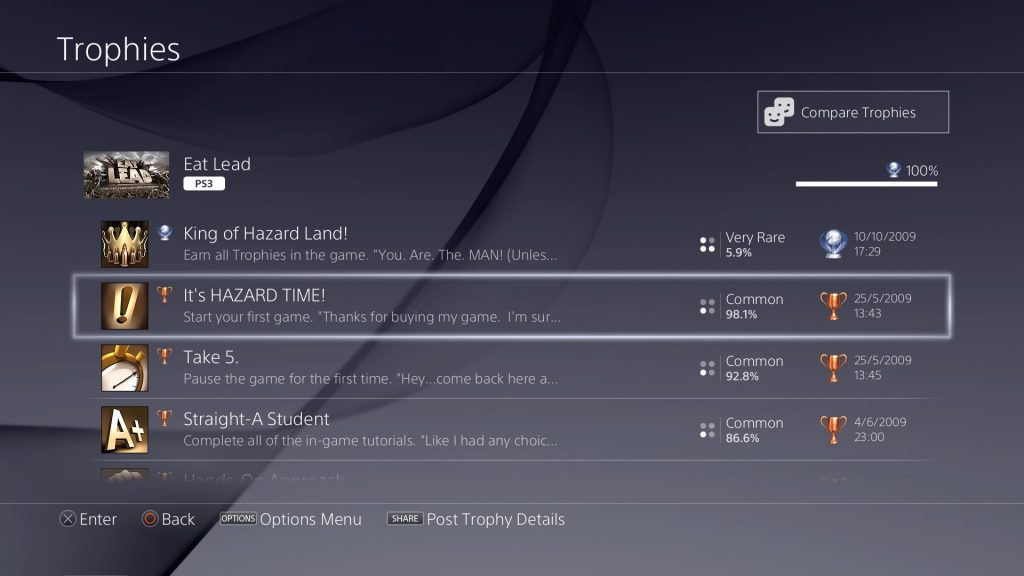 The next game is Telltales, The Walking Dead. This was by most standards, a good game. The trophy list is also very easy since you just need to beat the game to get the platinum trophy. You would think that this means that it would be a platinum that most people get even if they don’t like trophies. The easiest is of course the first trophy, complete the first chapter. It seems that only 86% of people actually finished the first chapter? This seems like an exceptionally large number. According to the record on VGChartz this game sold 790,000 copies on PS3, does this mean that over 100,000 people bought the game and didn’t even beat the first chapter, that’s nuts! 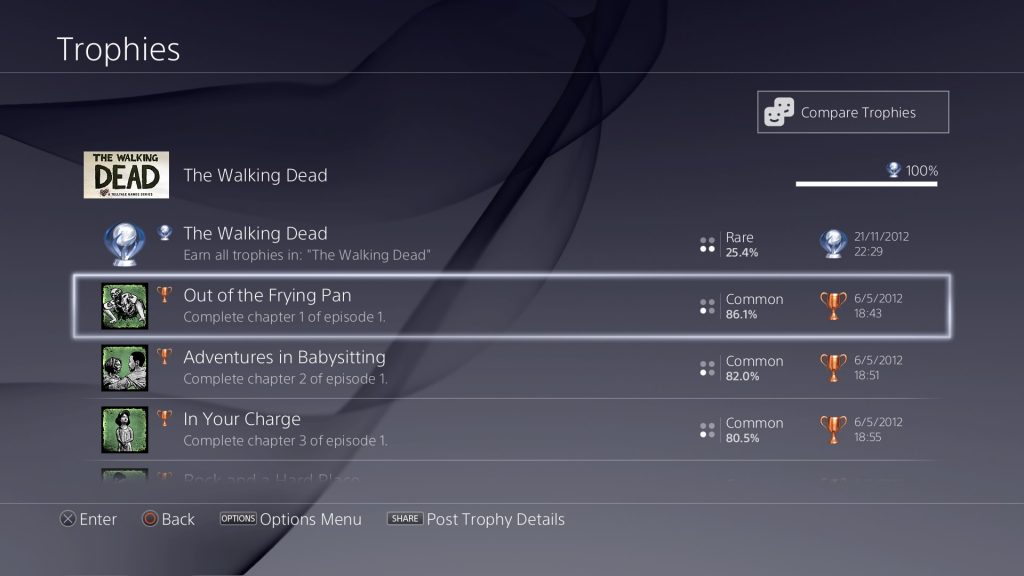 This is probably a game that most people wont remember. It was more of an interactive video as there was no gameplay. The thing lasts about 5 minutes and you cant miss the trophies. Watch the video and get them all. The stats here are the same, people are somehow not getting these trophies. 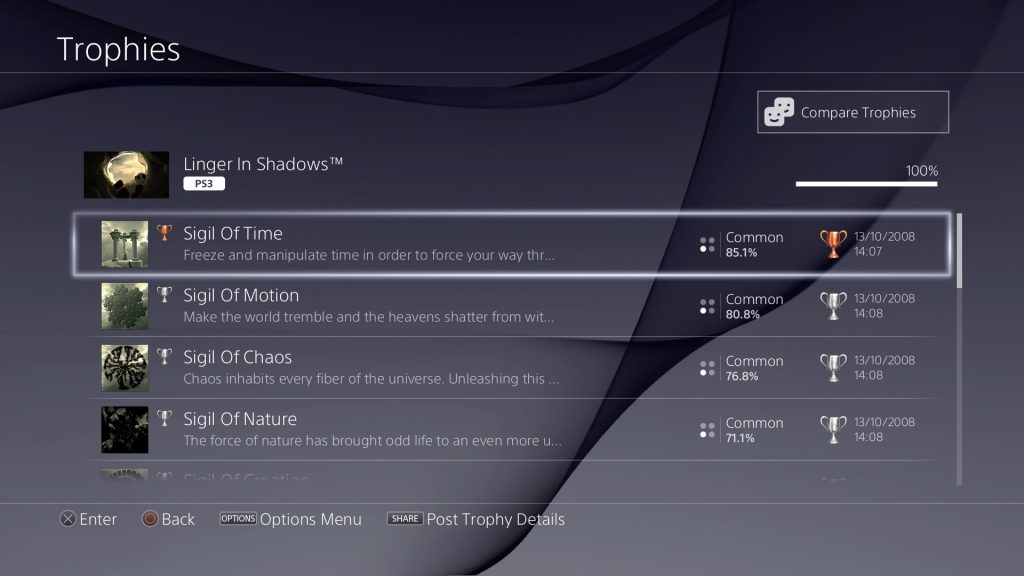 The final one just to prove my point is with Burnout Paradise. This game has been around for a while now. This game sold 1.9 million copies. Repairing your car is one of the first things you need to do in the game and it would be almost impossible to play the game and not need to do this at some time. Over 12% of the players never got this far in the game. 12% of almost 2 million is a hell of a lot of people. What are gamers doing? 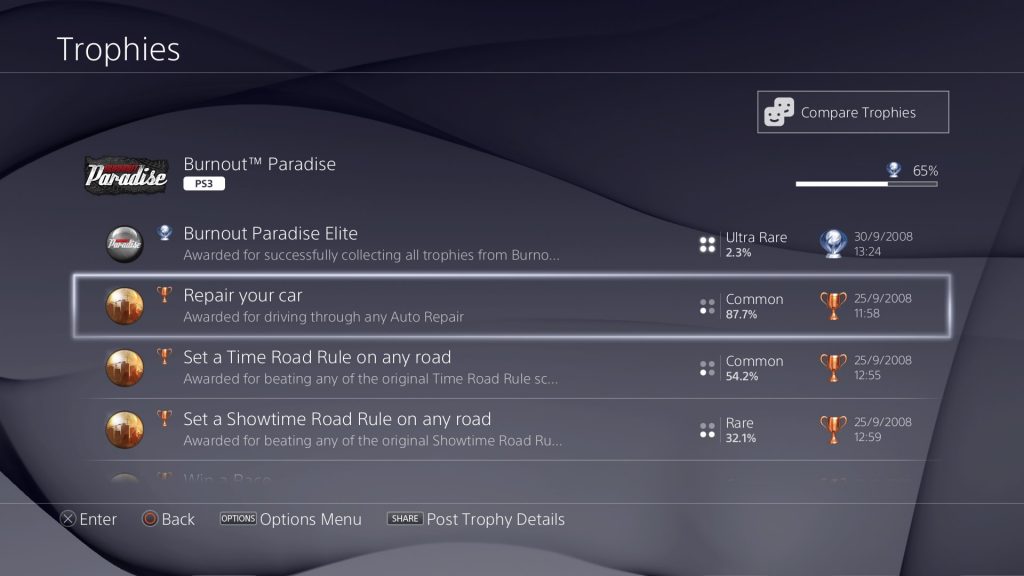 The percentages certainly take some of the enjoyment out of obtaining a particularly difficult trophy. When start of the game trophies are rare, your complete the game on hard trophy doesn’t feel so rare. This boils down to 1 of 2 things. Either the stats on the Playstation trophies app are messed up, or gamers are just throwing their money down the drain to never play a game.