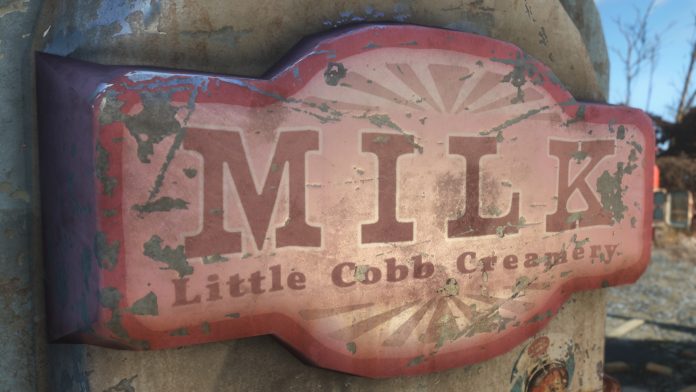 Bit of a pointless topic, but I couldn’t help but wonder what the significance is behind all the milk vending machines in Fallout 4. I don’t remember these featuring in past games and they seem to serve no purpose at all in this game. It’s cool that they have added some new machines for verity, but milk seems to be an odd choice. It isn’t something we commonly see (if at all) in the real world. I decided to dig into it to see if I outed find out anything about the milk of Fallout 4.

So the first thing is that there is of course no more milk. However, I did find it strange that there were only every empty milk bottle and never the remains of some spoiled bottles or nuclear cheese. It also seems strange that milk of all things would be sold from a vending machine. It is a perishable good with a short shelf life. Not really ideal for a public vending machine out on the street. While they may be out of place, there has to be a reason they have suddenly become part of the Fallout universe.

So it would seem that scrap is about all these vending machines are good for. Why they chose milk of all things is still a mystery. I would be delighted if anyone had some other info on why milk and not something normal and more commonly found in vending machines.