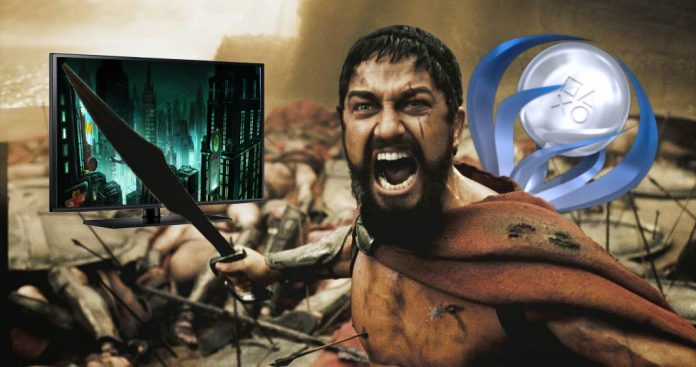 With starting any article that involves trophies or achievements, I feel I always need to defend myself from the most common response. Yes I understand nobody is making me collect them. When I play any game that support some form of network wide achievement system, I can’t help wanting to collect them all. The question most people, including myself want to know is, why?

I wish I knew the answer to that. Over the years I have played a lot of games and for the vast majority of these games there will be some achievement or trophy that requires you to beat the game on hard. In my quest for completion I typically go for this and get my 100% completion. Quite recently I beat Bioshock for the 3rd time on the hardest difficulty and I came to the realization that I am sick of beating games on hard for trophies or achievements.

As I have previously stated, I don’t know why I get the urge to get 100% completion for these lists. If I knew why, I wouldn’t have this problem. Sometimes I find that I play a game and really enjoy it. When the credits roll I can sit back and say “That was such a good game”. For the next day or so ill have the memory of this being such a great game that I was happy to have played. When faced with the decision to get 100% ill happily replay this amazing game. More time playing such a good game and of course ill be getting closer to that 100% goal. This is where things start to get sour for me.

I get easily pissed off when playing games. As a kid I left a trail of broken controllers in my path. As I got older I learned to stop smashing my belongings when I get pissed off, but the experience of getting annoyed is still something I hate. It makes me cranky for the day when I get stuck on a hard level. Very few games implement a hard difficulty in a fair way. Rather than make AI smarter or bullets more realistic, they instead make enemies bullet sponges and nerf most guns. This is just frustrating. 80% of the games i end up playing on hard are guilty of this. It is fine, playing on hard is optional after all, but for me it isn’t an option. I often find that having to do this ruins the experience of a game and by the time I have finished I look back thinking, “God I’m happy that game is done”. Its a strong contrast from my original opinion after beating the game on normal difficulty.

Hard trophies are not entirely to blame here, there are plenty of other games out there with such games with easy trophy lists that people like myself will pay money for garbage just to get them, bu I will save this discussion for a different day.

Trophies and achievements are causing my opinion of a game to turn from good to bad with one single unlock. Games without a hard difficulty award are often some of the games i remember so fondly. Getting 100% causes me to put a large amount of time into the game to experience everything, without the frustration of hard difficulty. I’m not sure if my urge to get 100% is something I can just stop doing. At this point I have gotten so sick of playing on hard difficulty that I sometimes get turned off playing a good game just because it has an incredibly difficult list. It seems like this is starting to have a real negative impact on my gaming experiences.

As you can see from the content on this site, I am a big fan of achievements and trophies. If Microsoft had an API i could use, I would have added support for Xbox achievement lists a long time ago. I have several games in my collection that I still need to get 100% in. The one that stands out for me is Uncharted 4. What an amazing game, but It feels incomplete. I loved the game when I played on normal. Started it on hard and it wasn’t too bad, but I got distracted by Fallout 4 and haven’t gone back yet. I am not overly keen on having to go back and play this game after the rage caused from getting 100% in the first 3 games. I really want to go back and play this game again, but I need a motivation to do so. My current motivation is going to cause me to get pissed off. Its quite the difficult situation.