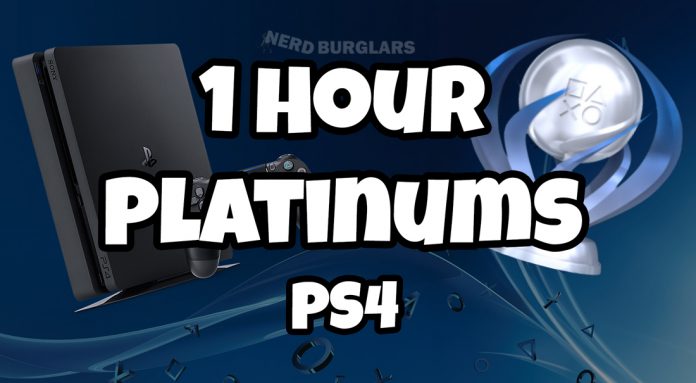 All of the games in this list are quick to platinum and are also easy. None of them require any sort of skill. Due to how quick it is to complete these games, nearly all of them have complete, start to finish, video guides that will show you how to get through it as quick as possible. There is a link to the trophy guide for each game for those on the hunt.

If you know of some other games with a quick platinum that has not been included here, leave a comment below. Happy trophy hunting!

Let’s not make this out to be anything other than what it is. A $2 platinum trophy. The game is garbage but the platinum is by far the quickest one you can obtain.

Little Adventure On The Prairie

This game feels like there may have been some good intentions behind this game. Its incredibly amateur and looks like it might have been made by a single developer.

Its space invaders and that’s about it. They didn’t add a whole lot to make it different from the classic game. But hey, you aren’t here to find games with revolutionary game mechanics, you are here for games that you can get a platinum in an hour or less. This game definitely fits the bill. Not that bad of a game compared to some of the others.

This game actually isn’t that bad. The double platinum makes it all the better. There is a bit of challenge to this and its much easier to platinum on the Vita. Its a quick and easy platinum to obtain and isn’t the worst experience you will have of the games on this list.

Quite possibly the best game on this list. Clever art idea and some enjoyable competitive combat. Lacks the polish of other big titles but this will be one of the few fun games that you can get an easy platinum trophy in.

Fairly boring game with little enjoyment to offer. This is your typical Angry Birds clone that has somehow made it to consoles. Super easy platinum that can be unlocked without needing to complete the game.

The exciting sibling to Midnight Deluxe brings you on an exciting new adventure to collect a super easy platinum trophy. The game is a bit challenging and requires some luck since the levels are randomly generated. Good luck or bad, the platinum is quick.

Depending on your sense of humor this one might actually be enjoyable. The game is incredibly stupid and involves tapping a jar of mayo over and over to get trophies. The game is quite funny so i wont completely bash it. The speed of the platinum depends on how fast you can tap!

From the same developers as My name is mayo comes Mr.Massagy. This game has a lot more substance than before and also requires a little more effort to platinum. With a guide, its an absolute walk in the park. Much like My name is Mayo, this game has a good sense of humor.

For some reason this game was released twice. The exact same game, same content and same trophy list has 2 separate releases. Unfortunately there is no Vita version, but still, you can get the platinum twice. The first time should be a platinum in an hour, the second could be 30 mins. The game has a nice art style, but not much else about it. The video walk through will help greatly.

I enjoyed this game, but it could have been so much better with just a little more effort into how you customize your ship. There is very little to get excited about after you complete the second level. The good news is you only need to complete the first 3 levels to get the platinum making this a nice quick platinum.

This one is coming close to breaking records for easiness. The goal of the platinum in an hour doesn’t apply here since its a 15 minute job. The game is an interesting gameplay style but my god does the music become infuriatingly annoying.