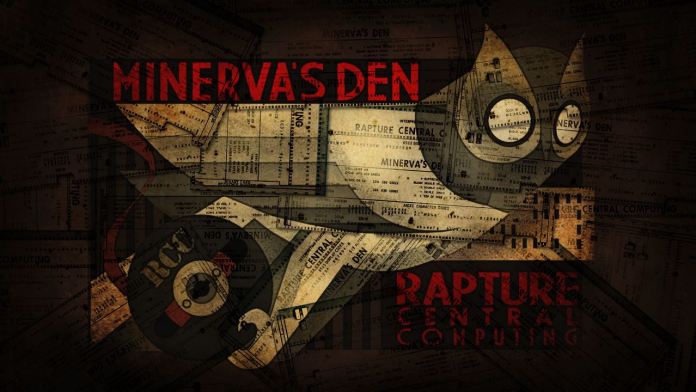 I consider myself a big Bioshock fan, but I will admit that I have never played Minervas Den before. Back when Bioshock 2 released I didn’t have the money to pay for the DLC when it came out. As time went by, I eventually forgot about the game and any DLC. After getting the HD collection I no longer have an excuse for not playing every piece of Bioshock content that has been released to date. I knew very little about the plot (intentionally), so the plot was a complete mystery to me. After tearing through the game, I must say that I am completely blown away.

It isn’t often that you get value for money when it comes to DLC. Most of the time it isn’t even worth it when it comes with a GOTY edition. In the case of Minervas Den, this is very much untrue. In fact, I would be inclined to say that Minervas Den was better than Bioshock 2.

Bioshock 2 was a pretty good game. It was not as good as Bioshock 1, but I still enjoyed the game. One thing I didn’t like about it was the fact that it felt more like Gotham City rather than Rapture. As soon as I began playing Minervas Den it felt more like the original Bioshock. Lots of windows and glass ceilings that remind you that you are below the ocean and not in come concrete slum. The story with Sofia Lamb was also a little meh at times. The game lacked a lot of mystery. By time I had beaten Minervas Den I was not only satisfied by the mystery, but I was also incredibly impressed with it as a retro Sci Fi story that I was not expecting.

The Setting Was Perfect

As I have mentioned in the past, I was not a huge fan of some of the locations in Bioshock 2. It felt more like Gotham rather than Rapture. All of the concrete made me forget it was below the ocean. I loved Rapture and was quite let down that Bioshock 2 didn’t take full advantage of this. Minervas Den was exactly what I wanted from a new Bioshock story. It contained buckets of the signature retro futurism that Bioshock gave us.

I am not sure how Bioshock 2 went the way it did, but Minervas Den seemed to correct all the mistakes they made with the level design. Lots of glass, lots of neon and more retro decor. With it being the computing sector of Rapture it also meant that this area of the city was far more high tech.

The Story Was Perfect

The real strength came with the story. The idea of a super intelligent super computer that has an AI far beyond what we have today is awesome. As you dig deeper and deeper into the history, it just gets more interesting. I think this could have made a much better story than the main story for Bioshock 2.

The main project of my final year thesis in college was to code an AI. This made this story even more appealing to me. The audio diaries were so much more enjoyable as I was genuinely interested in hearing more. Of course the story was loaded with over the top retro Sci Fi charm that comes from a mythical city beneath the ocean.

The story could not have ended with a better bomb shell. We know a lot about how they create Big Daddies and what they do, but the social side was never explored. Minervas Den gave us another side to it that shows becoming a daddy was almost considered a punishment. A way to silence the parasite.

The biggest let down from 90% of the story based DLC I have played is the length. I was quite satisfied with the length of Minervas Den. It took me about 6 hours to complete the story. This is almost the length we get from a full retail game. I’m sure others could rush through it much quicker, but I didn’t feel like I dragged it out in any way.

I liked Bioshock 2, but always felt a little let down with the story. Minervas Den has given me a lot more love for the game, yet at the same time makes me more let down by the story. What were they thinking with the Lamb storyline. The plot from Minervas Den should have been expanded and made the full story for the main game.