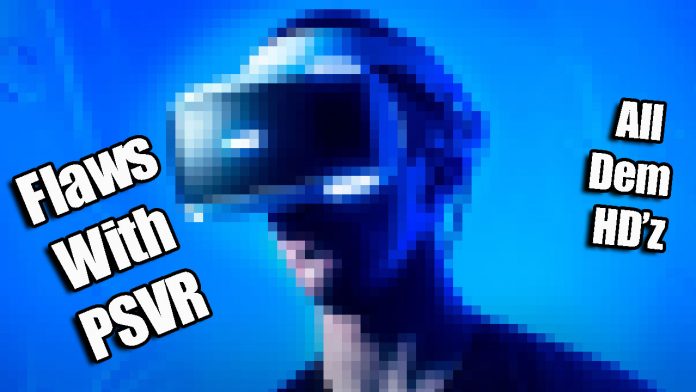 I picked up a PSVR just before Christmas and over the past few weeks I have played a lot of the best VR games that have been released for it. Overall I have been enjoying the experience of VR, but I can’t help but feel like the PSVR was a mistake, a mistake that will end up hurting VR more than helping it.

Back when 3D first hit the scene, I was a big fan of it. I played pretty much every 3D game on the PS3 and some of them, like Resistance 3 was brilliant! 3D had a lot to offer, but the experience was often ruined by movie studios “bolting” on 3D at the last minute as a way to get extra money at the box office. These movies would be shot in 2d and it would be converted (often very poorly) to 3d after the fact. People would go to the cinema, expecting Avatar quality 3D and came out wondering where all the 3d effects were. Some movies were perfectly watchable without the glasses. Poor implementation gave 3d movies a very poor reputation and I think the PSVR is doing the same for VR.

No matter what game I have played with the PSVR, one thing has been very clear to me (or should I say not very clear) is the quality of the screen used in the headset. You can literally see these massive pixels when you play. It is like taking a CRT TV and putting your face right up to the screen. The quality is horrendous. Thankfully, games made specifically for the PSVR use an art style that is light on detail making it quite easy to see things, but games like Skyrim are truly hideous. Jaggies, jaggies and more jaggies. Is that a tree, a dragon or a house? The screen is not capable of rendering the detail required by these games. Motion sickness is the least painful thing to be experiencing in some cases.

This feels like the exact same situation with 3d. Companies are cashing in on the VR hype with poor implementations that will only hurt it in the long run. If the game is not built for VR and doesn’t work all that well with the hardware, don’t release it!

When it comes to PC gaming, even games that are dreadfully optimised can run well if your system has the power. If a game doesn’t run well, then you need a more powerful rig. Hell even games that aren’t meant to be run in VR can be converted to run in VR. The performance here is never going to give VR a bad rep since PCs are so variable in the hardware they contain. With the PS4, we have a set piece of hardware and those who are uninformed will believe that the PSVR is the best that it has to offer. People may trust the brand to be the “best” VR experience and be let down. If I played the PSVR, thinking it was the best VR experience, I would think that VR still has a long way to go.

For the price, the PSVR is a pretty good VR headset. It gives you the complete VR experience, just a downgraded one. The level of downgrade depends on the game you are playing. I just wish they could have made it slightly less affordable and gave it a better quality screen. At the end of the day, they are competing with products that are far superior.

Just like there was with 3d, there is a lot of entertainment to be had from VR. If VR from home becomes a popular thing, multidirectional treadmills are sure to become a thing. We just need to hope that the PSVR doest cause the cash cow to be milked to the point that people lose sight of its potential.