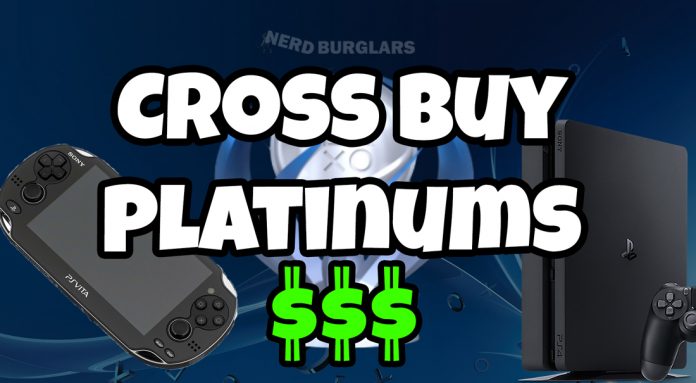 Cross buy platinums are highly sought after in the trophy hunting community.  Buy a game on the PS4 and you also get the game on the Vita. One thing to know is that just because a game is on the PS4 and Vita, does not mean that there are 2 separate trophy lists. A lot, in fact, most games will share the trophy lists. Now and then we do see a situation where you can get the platinum trophy twice.

Here is a collection of games with cross buy platinums. All of these games have a version on the PS4, Ps Vita and sometimes even the PS3 where you can get a separate platinum on each platform. If anyone knows of some other games that I have forgotten about, please leave a comment below.

The holy grail of cross buy platinums, Sound Shapes should be number 1 on your list if you own a PS3, PS4 and a Vita. This game is not unique in having separate trophy lists on each platform, it is very unique in having a cloud save feature. Beat the game and get the platinum on the PS4. Upload the game save to the cloud. Download this on the Vita and Ps3 to get instant trophies without needing to even play the game.

I have mixed feelings about this game. Its the best and worst game ever, all at once. This game is quite funny, which is impressive considering the entire game is based around you tapping a jar of mayo over and over until the lid comes off. Thankfully, the trophy list is simple and you can get it without even looking at the TV for the most part.

This is one of those games that you cant delete fast enough when that platinum unlocks. If anything, the devs should make the game automatically uninstall when the platinum unlocks because there is absolutely no reason to play this game otherwise. Double platinum though!

I actually had a lot of fun playing this game. Granted, is has glitches and flaws, but as far as playing games only for the trophies, I didn’t loathe this game by the time I got to the end of it. Its an 8-bit style retro side scrolling shooter. A bit like Contra I suppose, but shit in comparison.

This game will be hilarious or infuriating, depending on your sense of humor. It isn’t the shortest game when compared to the other games on this list either. When starting the hunt for cross buy platinums, it might be best to play this game first and last. Getting the double platinum back to back will not be a whole lot of fun.

Spent a while looking at this game thinking it was men holding bags until i realized it was their beards. Not the worst game and an easy platinum too.

Rip of space invaders and do nothing to change it at all! Well us trophy hunters are buying it so i guess it is a success!