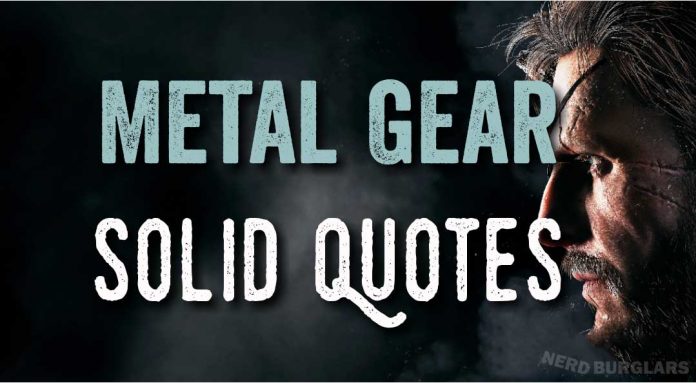 Metal Gear Solid is a game that has an incredibly intricate and long running story. Even those who have played ever game in the series can find themselves puzzled when playing the latest edition to the franchise.

The story can be very political at times…in fact its very political ALL of the time. This may not be a subject that interests everyone, but that doesn’t mean the writing is not fantastic in it. Chances are you have come across a few Metal Gear Solid quotes and not even known they were from this game.

Hideo Kojima has earned a huge amount of respect from all ends of the game industry and deserves every bit of it. He has constructed one of the most fascinating worlds where the true evil of political power is revealed.

As far as I know, Kojima does not speak much English. Whatever role he played in writing the story and scripts for MGS, were done so in Japanese. Credit to these quotes goes to the original Japanese writers but also to the people who had to translate this stuff. Stories this complex and detailed must require considerable effort to translate to English and still make sense.

Some characters from the series stand out far more than others. Solid Snake of course has some of the best lines, but that is because he is in almost every scene from every game. Revolver Ocelot and Big Boss from Snake Eater did provide us with some amazing lines too.

Below is a gallery that contains some of my favorite quotes from all games across the Metal Gear Solid series. If there are any really good ones that I have missed, please submit them in the comments section.