I picked up the side quest “The Secret of Cabot House” and I have found it really interesting. I am at the end of it now and I have located the Lorenzo and he is asking me to set him free. I have the option to do it but I can also kill him. I’m quite torn now on who to believe and what to do. I’d rather not side with him, but I feel like there might be some epic quest reward if I do. Based on the way this quest has gone so far, I feel like it might be worth my while to decide carefully.

For those who have completed the quest and made the decision on what to do, can I get some advice? Should I kill Lorenzo Cabot or let him free? What is the best option to go with in order to get the best Cabot mission rewards?

Game guides, questions & answers and other Fallout 4 posts. If the answer below was not helpful, and still need Help? Submit a comment below or ask a new question.

You have come to the point where you need to decide whether to kill or free Lorenzo Cabot. It’s tough when you are put in a position like this. Quite obviously that Lorenzo is a nut job, but what is the advantage of freeing him. Well here are the results of both decisions. 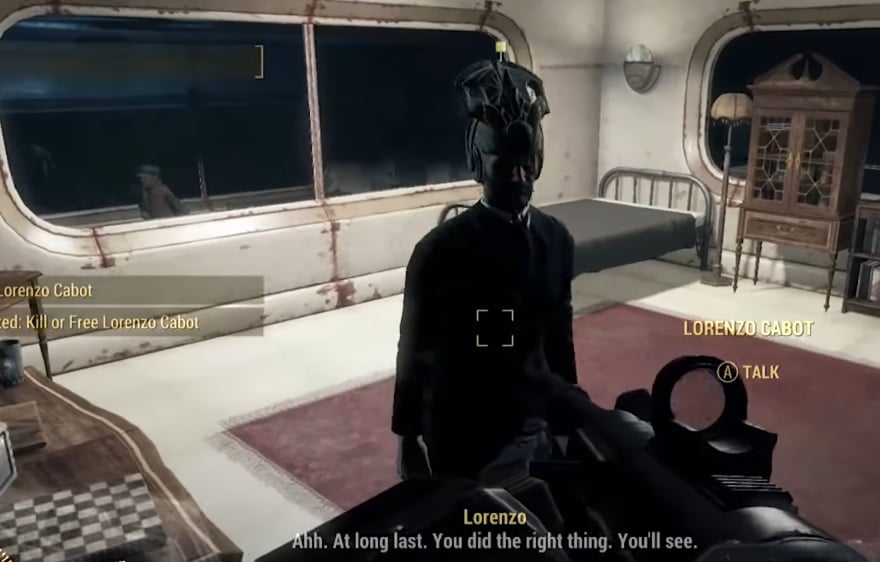 Should I Free Lorenzo Cabot

If you free Lorenzo you will get an infinite supply of the serum. You can only have one at a time, but if you keep going back to Lorenzo, he will continue to give you more of the serum. The serum will give you.

The serum will essentially make you resistant to radiation for 3600 seconds and also make you pretty strong. If you think this will come in useful then, by all means, go for it as it can be very valuable to have this. In saying that there is also a perk that will make radiation heal you, so if you have 9 endurance this serum might not be worth it.

Should I Kill Lorenzo Cabot?

Killing Lorenzo is the morally sound choice to go with. If you don’t have much need for the serum then this is the option you should go for when faced with the decision to kill or free Lorenzo Cabot. The reward for killing him is the control of his “artifact”. This is actually just a gun, but its pretty cool. It is actually just a Gamma gun with some special mods on it. For those unfamiliar with the gamma gun, it shoots radiation at the enemy. This means it will only be effective against humans. The gun will also give a kickback which can be helpful.

This is a tough decision as the reward for killing him and freeing him are pretty even. It will be down to personal preference, which decision you decide to make, but at least now you know the outcome on whether to kill or free Lorenzo Cabot.

Should I trust the Netrunner and betray the Voodoos?
[Cyberpunk 2077] - Should i betray the voodoos and trust what the netrunner is telling me about them wanting to kill me as soon as i give them what they want? View Answer
Should I Kill Crane At The Wayward?
[Fallout 76] - I am upstairs in the wayward with the scorched ghoul and need to decide if I should kill Crane or not. What is the best decision to make here? View Answer
Should I give the drug stash to Tucker Or Copeland?
[Days Gone] - I have been given an option to give the drugs to Tucker of Copeland at the hot springs camp. Which options should I choose? View Answer