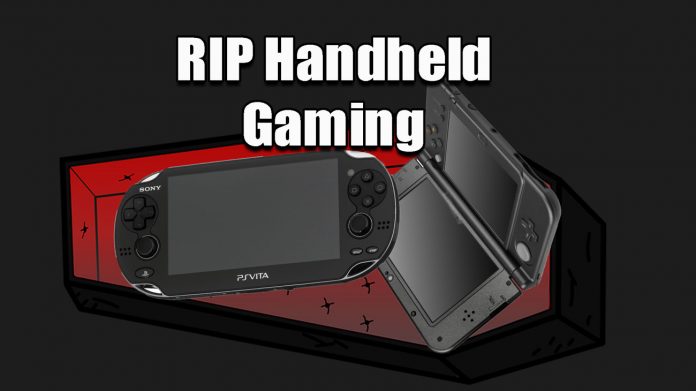 There was a time when handheld gaming was all the rage. Nintendo had domination over the market and was churning out some brilliant games. The PSP came along in the mid-2000s and blew us out of the water. How could a handheld play games that have PS2 graphics?! At the time, none of us ever thought there was a time limit on all this. Jump forward 10 or so years and the handheld gaming system is on its way out.

Before anyone decides to leave a comment about how they play Clash of Clans on their smartphone every day, this is not handheld gaming. Mobile gaming is huge and is only getting bigger, but there is a huge difference between a Samsung Galaxy and a 3DS. The Galaxy is a multipurpose phone. Even if the 3DS was a phone, can you imagine how stupid you would look making a call on it? Handheld gaming is based on a device that is built for the sole purpose of gaming. It has buttons, analog sticks (for modern systems) and various other things that are required to properly play a video game. Mobile gaming is here to stay, but handheld gaming has reached the end of its life.

The most recent generation of handheld gaming devices consists of the 3DS and the PlayStation Vita. The Vita was abandoned by Sony a few years back, but up until the release of the Nintendo Switch, the 3DS has been doing quite well. To put some contrast on it using the stats available on VGChartz. The Nintendo DS (the original one) sold 154 Million units worldwide, the 3DS sold 74 million and the PS Vita has sold 15.84 million. The figures for the Vita don’t look great when compared to the sales of its predecessor the PSP, which has sold 80 million units. Over the past few years in, the number of games released for handhelds has been dropping.

It is very clear from their current attitude, that Sony has no intention of supporting handheld gaming in the future. The Vita was dropped some time ago with no mention of it during press releases and major events. I have talked in the past about why the PS Vita was a failure. The point right now is that it was a failure and is no longer something Sony work on. Nintendo was able to focus on the 3DS while the Wii U was tanking. After the launch of their new hybrid system, the Switch, Nintendo have no placed themselves in a unique position. A home console that can be taken on the go. Based on the current sales, the Nintendo Switch is becoming one of the fastest selling systems of all time.

There is no room for handheld games in modern game development. Games cost far too much money to create. The processing power gap between something like the PS4 and the PS Vita is so large that games can’t be ported over, they need to be built from the ground up. This costs money, takes time and in most cases will result in an inferior, sup-par game when compared to the console version. Studios do not have the resources to focus on creating both games at the same time. If people want to play games on the go, most smartphones are capable of playing games with a relatively high level of visual quality. Why buy a handheld if you already own a smartphone and any game console or PC?

With the rise of mobile gaming, it puts game development for handheld in limbo. You make money with mobile games and you make money from console games. If you make a game for handheld it won’t look good on consoles and will not play well on mobile due to the lack of controls. Indie games can often run on everything with a visual style that can suit a small screen and a big one. The issue with this is that multi platform games do not sell systems. The Vita has a LOT of nice indie games on it and this has not helped it. The simple fact is that there is no longer any room in the industry for a dedicated handheld gaming console. With the massive success of the Switch, it is unlikely Nintendo will ever go back to a handheld and a home console pair. The future for gaming on the go is mobile or The Switch