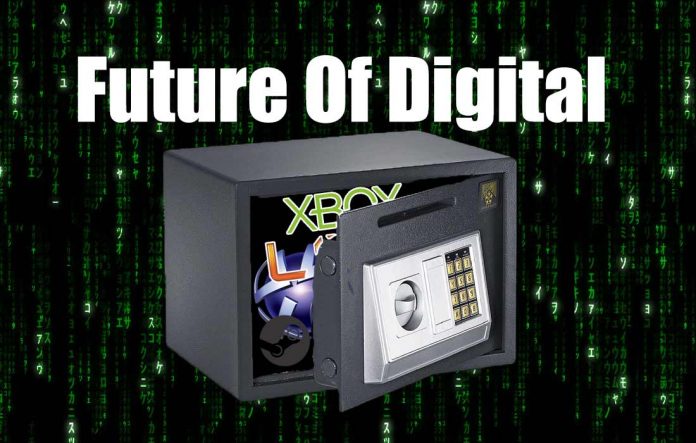 Digital has started a major change to how people purchase video games. It took a while to kick off, but it definitely seems like physical copies are slowly being overtaken by digital releases. In the here and now, digital seems to be the way to go, but I am wondering what the future is for digital games and whether the disc vs digital question is going to become something we end up regretting in the future.

Physical media has been around since the start of gaming and I’m sure it will be around for a lot longer. Digital games are a much newer concept and it seems to have become the new standard, particularly for PC gaming, where almost nobody buys physical copies of games anymore. Generally speaking, I think the convenience of digital is much more appealing to most people. Being able to have the game on multiple systems at once without needing to make sure the disc is in the drive is great. We have all experienced the treasure hunt where you open a game box to find a different disc inside and end up having to retrace steps through a dozen boxes to find the disc you want.

I like to collect games in general. When I buy a disc-based game, I get to put a nice new box in my collection. After around 15 years of doing this, I am getting to the point where I am running out of room to keep all of these game boxes. This has been the main reason that I have gone to digital, they don’t require physical space. Even though I own these digital games and can download them whenever I wish, I still don’t feel like I own them. This will become far more relevant in the future. I am going to use the Wii U as a perfect example of this. Let’s say I bought Breath of the Wild from the eStore. What happens when the eStore is shut down for the Wii U? Where does my game go? This is a less immediate issue with  PSN and Xbox Live, but it will become an issue someday.

The Wii U was a flop and Nintendo have done a terrible job in the past with their digital stores. The Wii U store is likely an inconvenience for them to continue to run. Even in it’s prime, the Wii U wasn’t a heavy hitter. They will have to shut this down eventually as I am sure they make no money from it now. Even if they didn’t shut it down due to financial reasons, what happens when web technology advances so far that they can’t continue to support legacy systems. I have an NES that I can take a game off the shelf for and play anytime I want to. In 20 years time, I can’t do the same when I have purchased a digital game and now I can no longer gain access to the location where it was stored. With PC backward compatibility is not an issue, but we cant be so sure with consoles. There is no assurance that the PS8 will be able to play PS4 games.

I can’t see this ever being an issue for Steam unless they somehow go bankrupt. The likes of Sony and Microsoft, will continue to release new systems in the future and eventually, their older systems will be forgotten about. Even when this happens they will still need their networks for those newer systems. The cost of keeping the Xbox 360 portion of the network online will be tiny when they are still needing to keep the entire network up for the Xbox One or future systems. The main problem is that networking technology is going to advance. What if the regular internet we have today is superseded and Xbox live moves to this new tech. Xbox live is still online, but the Xbox 360 is not able to connect to it anymore. The point I am trying to make is the network may be online, but advance so far that the legacy systems can no longer connect to it. With shaky backward compatibility, there is no confidence that the new systems that can connect to Xbox Live, will be able to play legacy games.

For the time being, it seems like we are fairly safe with our digital games, but I can’t fully get into it yet. The storage space is getting annoying, but there needs to be some method that we can use to create backups of our digital games so that if we ever lose access to an online store for good, the products we purchased are still available to us. Game stores are not rental services, therefore they should not be allowed to take the products away from us. Then again, whoever reads the massive terms and condition sections that these websites have? How do you feel about the argument of choosing digital games over physical? What will happen to our games when digital stores are shut down forever?