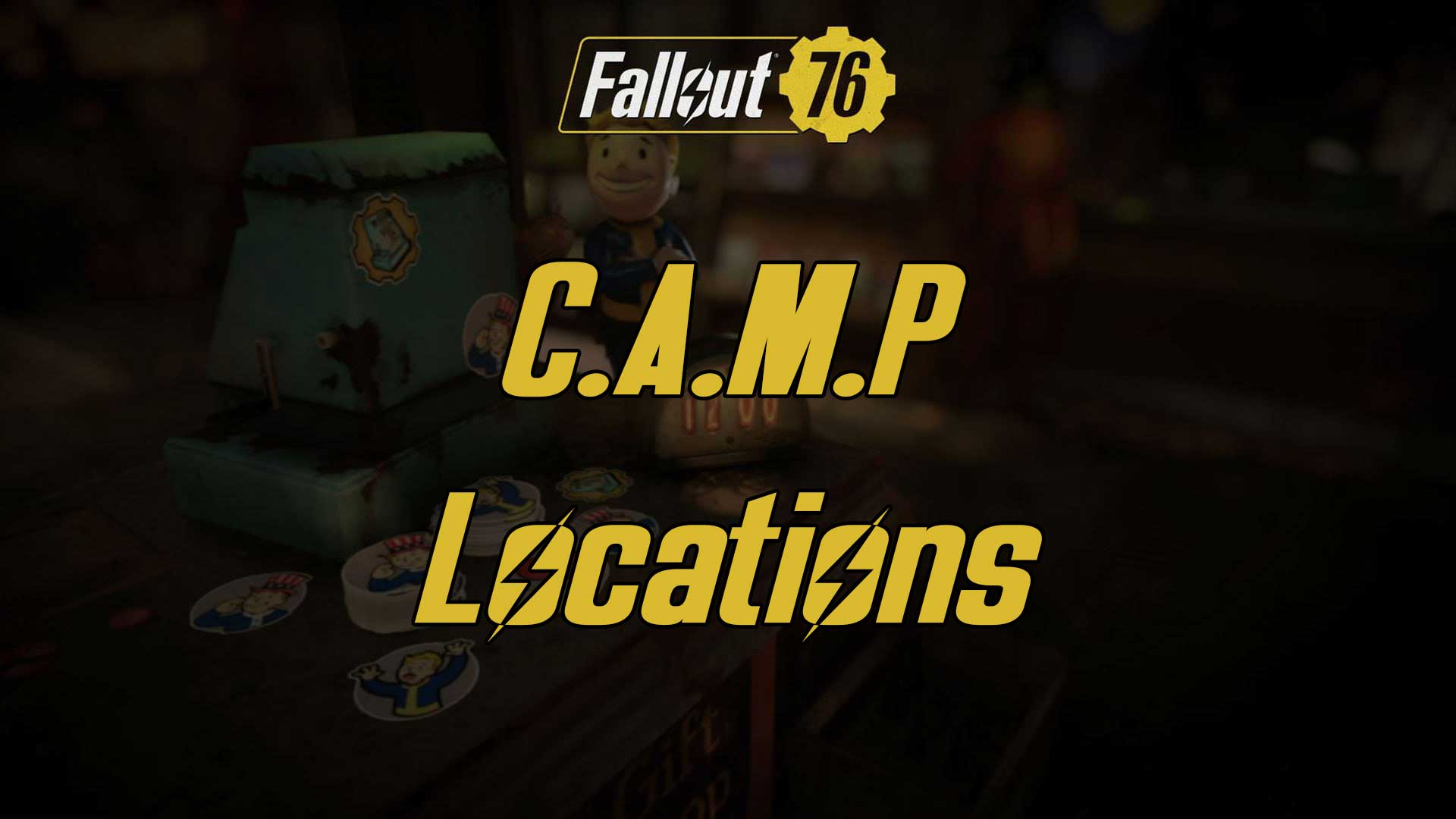 The C.A.M.P In Fallout 76 is an expansion of the settlement system that we saw in Fallout 4. All players will have access to a C.A.M.P machine. Placing this on the ground will allow you to construct a small settlement where you can build a structure and populate it with various workbenches, defensive structures and resource gathering machines.

When you are faced with the decision of where to build it, you have a large map with various points of interest, where is the best place to build your C.A.M.P?

Finding the best place to build your C.A.M.P In Fallout 76 depends on how far through the game you have progressed. An early level player with limited supplies and gear, will not be able to access various locations of the map without getting your ass kicked. I have broken down some good locations in the sections below to help you find the best location for building a C.A.M.P in Appalachia.

The locations above are just some cool locations that I have found on the map that is useful to build a CAMP at. If you have found somewhere better, feel free to share it below. Generally, though, all you need for a good location are access to some kind of resource and located in a useful location to help reduce fast travel costs.

If you need to travel from the top to the bottom of the map, you might get lucky and find some events or CAMPs from other players. If your camp is in the middle of the map, you can travel to this location, to cut the cost of your fast travel journey in half.

It is also good to build your camp on top of a location that has some kind of resource you can build a machine on top of to generate a steady supply of free resources. The Fallout 76 map here is a fantastic resource to use for finding some awesome locations to build your camp based on your current needs.

During the early stages of the game, you will be limited in where you can travel to. High-level enemies will wipe you out quite easily and you will struggle to even travel outside of the initial forest area without getting into some trouble. This doesn’t mean there aren’t good places to go to.

This is one of the best locations. In the early stages of the game, inventory will be an issue. Bringing back huge amounts of junk will end up costing quite a bit of time while you are over-encumbered. This location contains a junk pile. You can build a machine on top of it and you will find yourself with a steady supply of free junk right at the doorstep of your CAMP. It is also in a safe location where you have access to build a water purifier and minimal contact with enemies.  The sunshine plant is just down the road for you to print a nice steady supply of food that won’t go stale.

Another location marked above is the top of the world. This location does not have a great resource to make use of but you will find there are a lot of quests from the main story and several side quests. Having your camp here will save you a lot of caps from fast travel fees.

Midway through the game, you will still be on the left side of the savage divide. This stage of the game is a bit of a limbo mode. You are probably strong enough to take on some of the higher locations of the game, but the cost of staying there will likely cost you too much grief. Here are some useful locations to settle down in when you are just getting on your feet. You likely have a junk collection at this stage which will allow you you to pick some locations based on their view and their ability to facilitate fast travel.

A lot of people like to settle down in the Whitesprings resort (marked blue) and stay there forever. You have the comfort of the robots there to take care of you. The downside is there are so many other players here who also want to make use of this. You will get lots of conflicts when logging into a server due to another player already being situated where your CAMP is.

The Gorge junkyard marked purple is another good location. You can’t build your camp on top of it is it is a workshop but building nearby is good for two reasons. First, it is central and will be a good fast travel location up and down. The junkyard also has a black titanium deposit which is a valuable resource for you later on in the game when it comes to power armour.

Top of the World Remains An Awesome CAMP Location

The top of the world location is still one of the best places for a camp at this stage of the game. It is so central, near a railroad and there will still be some quests that come up in this area. The amount of effort you save being able to travel to this point before a short journey to the quest marker is super valuable.

Once you are nearing level 50, you will likely have little need for a guide like this anymore. Based on your play style, you should have identified the best locations on the map that works for your needs. Be it a useful fast travel location or as a quiet place to farm resources that you need.

You will likely have quests in foundation and crater which are on complete opposite locations of the map. Fast travel costs are likely to be a problem for you no matter where you place your CAMP. Picking somewhere in the middle of these two locations is always valuable.

For the vast majority of people who want to make the best use of their C.A.M.P at this point of the Fallout 76 lifecycle, building in the south-east corner of the map near the Scorch Beast Queen is probably the best location. Close to the event that you will be trying to join in on as often as possible.

So Where Is The Best Place To Build a CAMP?

I have covered all of the terms and conditions that help people to find the best location depending on their needs. Here are some places where most people tend to focus their efforts of CAMP building in Appalachia. These may not be best for you, but these are the locations people tend to go with.