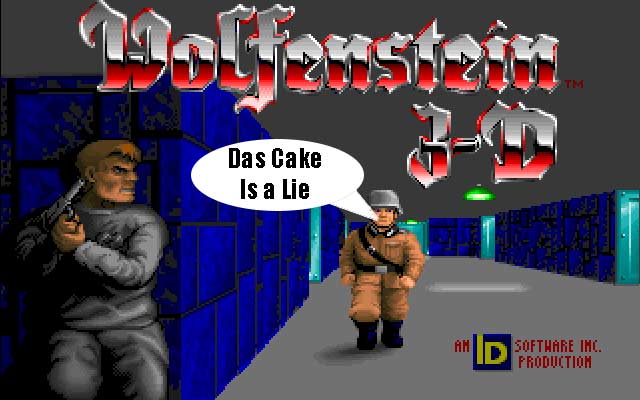 Back in the early days of 3D gaming, voice acting was a very rare occurrence. When you had to fit a game on a 1.44mb floppy disk, you didn’t have much room for high quality audio recordings. When non MIDI audio was used, the sound quality was typically compressed to the point where it was difficult to make out exactly what was being said. When you encountered a new enemy it was fairly hard to know what the soldiers in wolfenstein were saying.

Wolfenstein 3D featured several audio clips that would be triggered when an enemy would detect you and when you killed that enemy. All the enemies speak German, which adds a layer of difficulty for English speakers to understand. However, the grammar is meant to be so poor that a lot of what is said in this game, makes very little sense. So, what are the soldiers in Wolfenstein saying?

The standard soldier is one of the first enemies you will come across. He is wearing a tan color uniform and is equipped with a pistol.
Alert: Achtung (Attention)
Death: Aaagh

These lads are more formidable as they have machine guns. They also take a lot more damage before they go down.
Alert: Schutzstaffel (Elite Guard)
Death: Mein Leben (My Life)

This is like the captain or something. He is much faster than the rest of the enemies. He is wearing a white uniform.
Alert: Spion (Spy)
Death: Nein, so was! (Well, I never)

Why is he floating like some wizard? Who knows, but it’s Hitler and hes having a great laugh by the looks of it.
Alert: Tod, Hund (Die, Dog)
Death: Laughte

We will start with his name. Hans is a male name in Germany. Grösse means big or large. I don’t think it is used as a surname. In English it would be more likely to see this as a nickname written as “Big Hans” or something like that. I think this is just an example of the dreadful use of German in this game.
Alert: Guten Tag (Good day)
Death: Mutti (mommy

One of the least threatening bosses in the game. Just some mad Nazi doctor. His death phrase seems kind of strange since “himmel” is the German word for sky. So maybe he is saying “My god in the sky” or “My god in Heaven”. Google translate seems to think that its “Oh my god”. Guess it will take a native speaker to translate this properly
Alert: Laugh
Death: Mein Gott in Himmel! (My god in heaven)

Despite what his name might suggest, Otto is not a gift maker. “Gift” is German for poison. So he would be Otto Poisonmaker. With BJ being an absolute monster in size, it’s funny that this guy calls you small.
Alert: Eine kleine Amerikaner (A small American).
Death: Donnerwetter (My Word)

You guessed it, the sister of Hans and equally as large. Their poor mother must be in a wheelchair after giving birth. Gretel has quite a strange voice, must be some testosterone abuse going on. Her lines are particularly hard to translate, but we can guess that she isn’t talking about busses when she dies.
Alert: Kein Durchgan (No Tresspassing)
Death: Mein Busse (My Repentance)

Big lad, sounds like he is eating something when he speaks. At least its more clear than Gretel.
Alert: Erlauben Sie, bitte (Allow me please)
Death: Rosenknospe (Rosebud)

So there you have it, the main lines of dialogue. Now you know what the soldiers in Wolfenstein are saying. It may not make sense and the translations make less sense, but at least you have learned something new

For those who want to listen back to all of the audio. This video will go over all of it to show you what the soldiers in Wolfenstein are saying with translations and subtitles.