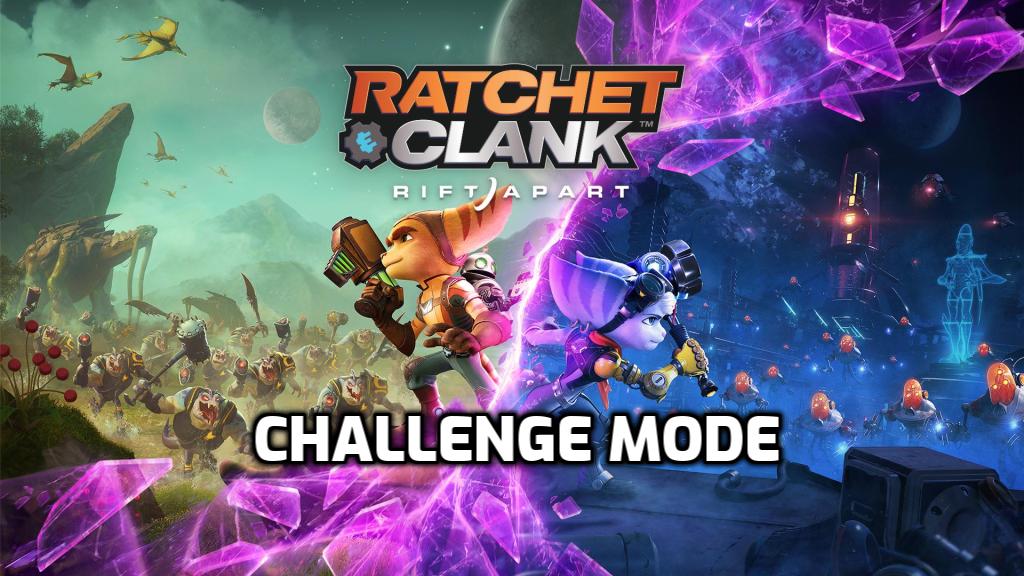 Challenge mode in Ratchet & Clank: Rift apart is a new game mode that is unlocked once you complete the main story for the first time. It is essentially a new game plus. You keep your character progression and start the game over from the start.

Challenge mode comes with a bolt multiplier which goes up every time you kill an enemy and is reset when you take damage. The difficulty is also upped to counter in the fact that you are now at the very start of the game with most of the weapons unlocked and upgraded.

Important Things To Know About Challenge Mode In Rift Apart

Since I had several questions and hesitations about challenge mode when I first played the game, I said I would put a guide together to help anyone who is trying to decide whether they should go back and get the platinum trophy before starting the game on challenge mode. Or for those just wondering whether challenge mode is worth the hassle.

If you have collected half of the gold bolts and start challenge mode, you will still have the same amount when you start the game. All progress with the gold bolts does carry over. This can be handy as you will be revisiting the planets as part of the story for the second time around. While you are here, you can be cleaning up the remaining gold bolts.

All of the bonuses for the bolts also carry over so if you collect enough, you could play challenge mode with infinite ammo. You can check out the Rift Apart collectable guide if you are having trouble finding the last few collectable items.

Side Quests Will Be Reset

If you have been working toward collecting the Lorbs or have a few half-finished side quests, starting challenge mode will trigger a reset of all progress. Since most quests are short, it is not the end of the world but make sure you finish off any of these that you might have on your mind before starting again.

There is one exception to this and that is with the Feed Trudi quest on Sargasso. This quest has a glitch where the Zurpstones you collect the first time, do not get reset. When you accept the quest, you will be asked to find 15 but there may be none left. There is a workaround for this which you can find in the quest guide here.

Weapon Upgrades and XP Carry Over

If you have been spending all of your hard-earned raritanium on upgrading all of your weapons then you can enjoy all of the benefits that come with this when you start the game again. All of the XP progress and the purchased upgrades will carry over.

There is one thing to note and that is that the level cap for all weapons will be increased to level 10 and a large number of new weapon upgrades will also be available. If you have reached the end of the first playthrough and have a max level for all weapons and have purchased all upgrades, when you start challenge mode, there will be lots of new upgrades you can buy along with 5 more levels to grind up.

In order to access the next 5 levels for weapons, you will need to purchase the new and improved version of the weapon from Ms Zirkon. You can find out more in my Rift Apart weapon guide.

The current amount of bolts you have will carry over but it is not worth it really. The bolt multiplier that comes as part of challenge mode can result in you pulling in over 1 million bolts from a single encounter if you are good enough at the game. There is little need to worry about bolts in challenge mode.

In saying that, you will find you need to obtain a huge amount of bolts very early on in the game in order to purchase all of the upgraded variations of the weapons. If you want to get off the ground as quickly as possible, you can follow these bolt farming methods to quickly obtain lots of bolts to purchase the upgrades you need.

The gadgets you receive in this game come as part of the main story. When you start the story again, you will lose these and you will need to progress further with the main quests in order to unlock them again. This means that you will not be able to dash or have hover boots when you start the game for the second time in challenge mode.

Weapon upgrades carry over and so does any unspent Raritanium that you have when you start challenge mode. With the upgraded weapons available in this game mode, you will find that you need an awful lot of raritanium in this playthrough, especially if you didn’t focus on farming for it during the first run.

There are lots of really good ways to grind for infinite Raritanium that will help you get huge amounts of it very quickly if you want to purchase all of the upgrades as quickly as possible to help you deal with the hordes of more challenging enemies to come.

Can you go back and play the main save after starting challenge mode?

Is There Anything To Spend Bolts On After Weapons Are Purchased?

This is the big question I had. I spend some time early on grinding bolts to unlock weapons and once I had them all, my walled was quickly filling up, but I was not sure what I could spend the money on.

The bad news is there does not appear to be anything that you can spend the money on. Bolts are pretty much useless once you have purchased all of the weapons. Since you will be earning lots of bolts in challenge mode with the bolt multiplier and maybe even the 20% bonus bolts armour suit, it won’t take you long to reach the max amount of bolts that Ratchet/Rivet can carry at any one time.