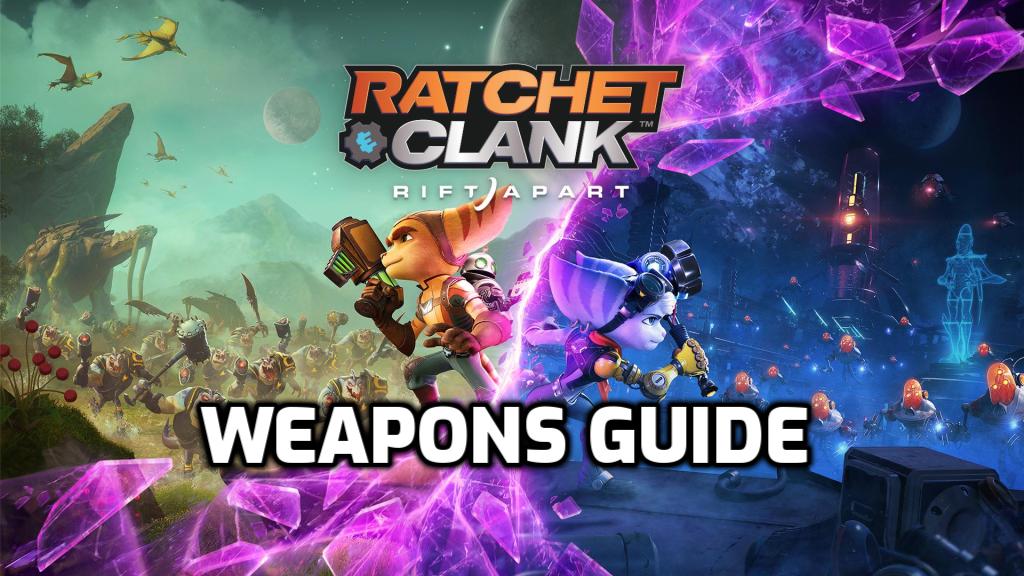 Ratchet & Clank is a game franchise that is well known for having an incredible arsenal of insane weapons. Even the most humble of weapons are capable of dishing out some serious damage when you take the time to upgrade them.

Ratchet & Clank: Rift Apart is no exception as it has one of the most diverse and exciting weapon lists in the franchise. For those looking to know what the best weapons in the game are or what weapons are best avoided, check out the complete Rift Apart weapons guide below.

Below you can find a video with an overview of all of the weapons and a brief rundown of where they are most effective. Will help you decide the best places to invest your raritanium.

Having played through the game twice, once on challenge mode. I was quite obsessive over making sure I upgraded every single weapon. The following weapons were the ones that were the most diverse and useful in dealing with all of the enemies that the game throws at you. If you have a limited amount of raritanium, these are all of the weapons in Ratchet & Clank: Rift Apart that you need to focus your time and effort getting upgraded as quickly as possible as they are going to help you get through the most difficult challenges with ease.

Is There Enough Raritanium To Fully Upgrade All Weapons?

The answer is yes, but you will have to go out of your way to grind it in certain locations. The video guide below will show you one of the best locations to get unlimited raritanium that you can use to upgrade your weapons.

If you decide to start a new game in challenge mode, you will keep your upgrades and be able to collect all the raritanium again. The problem is that the weapons also have another round of upgrades that you can purchase so you will need more of it to fully upgrade the weapons. The best course of action is to use this guide to farm raritanium in Rift apart.

Weapons That Are Not Worth Upgrading

Whether a weapon is good or not comes down to your play style. There are a few weapons in this game that really just don’t cut it when compared to the other weapons in the game. Having spent a lot of time upgrading every weapon in the game, the following list of weapons in Rift Apart were ones that stood out as not being worth the time and effort it took to upgrade them. It is up to you if you want to ignore them but I found very little benefit in having these upgraded when I had the other high powered weapons in my arsenal.

Now that you know the weapons to focus on and the weapons to avoid, anything not mentioned is pretty much up to you. They are all worth upgrading but focus on the good ones first and then work on the less powerful weapons. I would recommend you check out the video above for a better idea on what weapons are best for you before you start playing the game.

Boss fights are common enough in Rift Apart. Sometimes they are major story bosses and other times they will just be heavy machines/large enemies. You will always know it is a boss fight due to the health bar that will appear at the top of the screen. These enemies are always harder to take down and you will need to unleash everything you have to avoid getting killed. The list below will highlight some of the best weapons in the game that you should be using for boss fights.

Best Weapons for Crowds of Enemies

Enemies often tend to come in groups. A group of sandsharks may not be quite as scary as a group of heavy Nefarious mechs so you will know when you need to dish out the big guns. Boss fights often come with swarms of enemies so knowing the right weapons to use during these battles is essential. There are a few weapons that are incredibly powerful when it comes to disposing of larger groups of enemies. Splash damage and multipliers based on enemies hit will all come into play here.

What Weapon Do You Get For The Spybots? [SPOILERS]

There is a collectable side quest where you will be promised a weapon of epic proportions if you are able to locate the 10 hidden Spybot across the galaxy in Rift Apart. Finding all of the Spybot is easy enough since the map for the planet will let you see whether it has a Spybot or not. Once you get them all, what is the weapon that you get for your troubles?

For most fans of the franchise, this weapon sounds like it will more than likely be the Ryno V rocket launcher. Kind of exciting but also a letdown that it will be given to you so late in the game if it is true, but is it?

The answer is the Ryno 7. You can actually see this spoiled by one of the game progress trackers in the main menu of the PlayStation 5. Once you collect all of the Spybot, you will unlock this awesome weapon. Probably useless if you unlock it in your challenge mode run.

I hope that everything I have covered in the detailed guide above will answer all of your questions. To help you out, I have put some common questions people have in the section below that might help you decide whether a certain weapon is for you or not.

Is The Groovitron In Rift Apart?

Most definitely my favourite weapon from the Ratchet & Clank series. Will this awesome grenade that makes everyone dance (that Fortnite definitely didn’t blatantly rip off) make an appearance in the latest ratchet and clank game?

Sadly, no! Unless this is some super legendary rare weapon, I can safely say that after two complete playthroughs of this game, the groovitron was not a weapon that I was able to find in this game. It can’t be purchased from the traditional vendor and was not an item unlocked from any side quest or collectable in the game.

Yes, this is very common when you are using them at a low level with no upgrades purchased for them yet. They are pretty useless in their basic form. They are, however, one of the best weapons in the game and are worth every piece of raritanium it costs to upgrade them to the highest level.

Is The Large Negatron Collider Worth Upgrading?

This is a tricky weapon to use and as I mentioned in the guide above for weapons to avoid, this weapon is a rather clunky one to use. The trouble it takes to use combined with limited ammo and the fact you need to avoid all damage while standing still to make use of it, the weapon is not really worth the effort of upgrading in my eyes. Dedicated gamers can put the time into upgrading it but I would not suggest you waste time upgrading this.

How Do You Unlock The Pixelizer and Bouncer?

What Are The Best Weapons To Focus On?

I would suggest you scroll up and check out the list of the best weapons to upgrade in Rift apart. It will go into detail to explain the weapons that provide the most value that you should aim to upgrade quickly as possible.

Like with most Ratchet & Clank games, the arsenal of weapons available to you is going to be pretty awesome. The majority of weapons are worth upgrading in the long run but the list above will highlight the ones that you should try to upgrade as quickly as possible in order to be able to tear through the more difficult encounters.

Yes, when you purchase an upgrade as one character from Ms Zirkon, the upgrade or new weapons will be automatically be added to the inventory of the other character the next time you switch over.

Are There Trophies For Upgrading All Weapons?

There are a LOT of weapon upgrades when you consider getting from level 5-10 adds a considerable number of new upgrades. There are a good few weapon-related trophies in Rift Apart but none of them will require you to get all of the upgrades. There is a trophy for purchasing every weapon but this will come naturally as you work through the game.