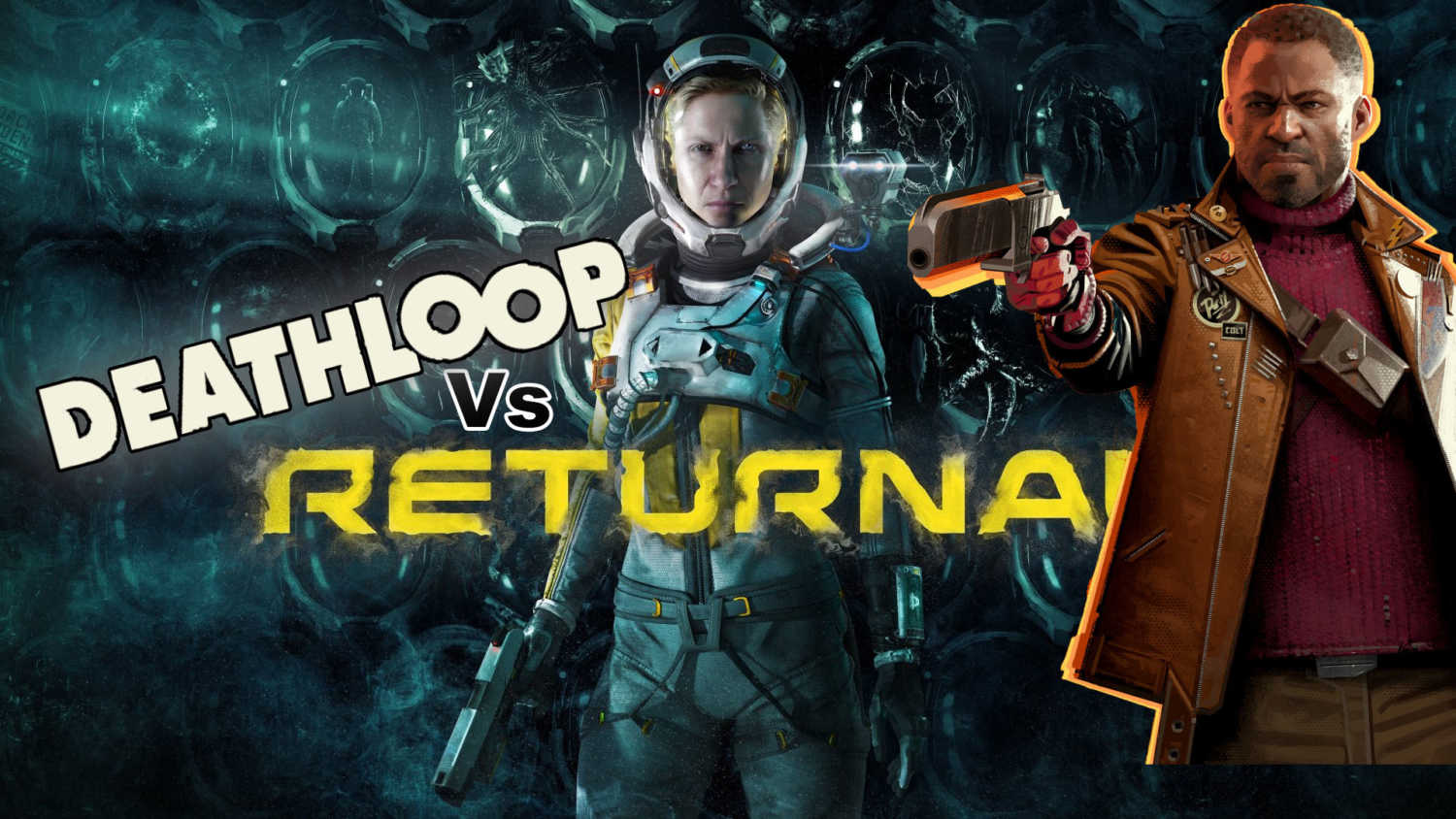 The rising popularity of roguelike-inspired games has introduced gamers to an array of interesting takes on the groundhog day style looping system. A world where you die and everything resets, but you often retain some information or items that will aid you in your future attempts at conquering the loop.

In recent times, we have started to see some high budget games join the ranks of the roguelikes that offer a more story-driven take that can compete with Hollywood movies such as the Edge of Tomorrow. Two of the most recent are Returnal and Deathloop. How different are these two titles from each other?

Returnal takes us to a mysterious planet that oozes the aesthetic and atmosphere of an alien movie. A bleak scenario that gives you the smallest glimmer of hope to drive you through to the end. You pick up small clues of what is going on from the corpses you discover of your former self but these act more as an insight to your characters inner monologue rather than a process to drive the narrative.

Deathloop takes things in a completely different direction. You are submerged into a vibrant and groovy, 1960s spy inspired world. It often feels like Austin Powers could appear at any moment. Although not strictly a comedy, the game relies heavily on the humour between the main character and that of the main antagonist.

The two games feel like polar opposites to each other in terms of the story and setting. Returnal is far darker and serious where hope is fading away. Deathloop is far more optimistic in the odds of reaching the end and the setting adds plenty of fun, colour and humour.

Returnal adopts a strict loop reset mechanic that will wipe absolutely everything. All you keep is combat experience that you learn from facing the same enemies over and over. As you hone your combat skill, the game becomes more manageable and the likelihood of breaking out of the loop become more of a reality.

Deathloop breaks the mould quite a bit by allowing you to spend resources to permanently retain items and abilities. This allows a certain amount of loop grinding. If you struggle to survive, you can simply die over and over until you get to the point where you have purchased enough skills, weapons and trinkets to be more powerful, making survival easier.

The difference between the loop mechanics greatly influences the overall difficulty of the game. Returnal generally wants you to get from the start of the game to the end in a single run without starting a run with items and upgrades that you have obtained from a previous run.

The loop, while being the core of the Deathloop’s story, is not the defining feature of the gameplay and is not a major aspect that influences the game difficulty. Surviving a loop until the end is not really the key to escaping the loop. You must repeat the loop over and over until you obtain enough information to know how to break out.

Where Returnal opts for a brute force method of escaping the loop, where you must fight your way through enemies and bosses until you break free. Deathloop gives you a mystery that you must approach from different angles and perspectives until you have obtained the full picture that acts as your key to breaking free.

Returnal and Deathloop are both shooters but differ in their perspectives. Returnal being third-person and Deathloop being a first-person shooter. While they do both involve shooting enemies, they differ considerably in how you go about doing that shooting.

Returnal is a high action shooter. You need fast reflexes and precise shooting to ensure you do not die. Some of the enemies can be punishing and the amount of them that can swarm you at once will put even the most experienced gamer to the test. Although there are audio diaries and small story elements to pick up, the majority of the gameplay involves shooting your way through hordes of enemies to get to the end of the world in the hope you break the loop.

Deathloop incorporates several mechanics to build a game that you can approach differently depending on your style. If you want to run in, guns blazing and unleash the Colt storm, you can do that. If you want to sneak across the rooftops, taking out enemies one by one, you can do that too. You could also complete some stages of the game without having to kill anybody at all.

The gameplay in Returnal is a lot of fun, but it is very specific. The more dynamic style of Deathloop will appeal to many more gamers who may not want to face the less forgiving challenge presented in Returnal.