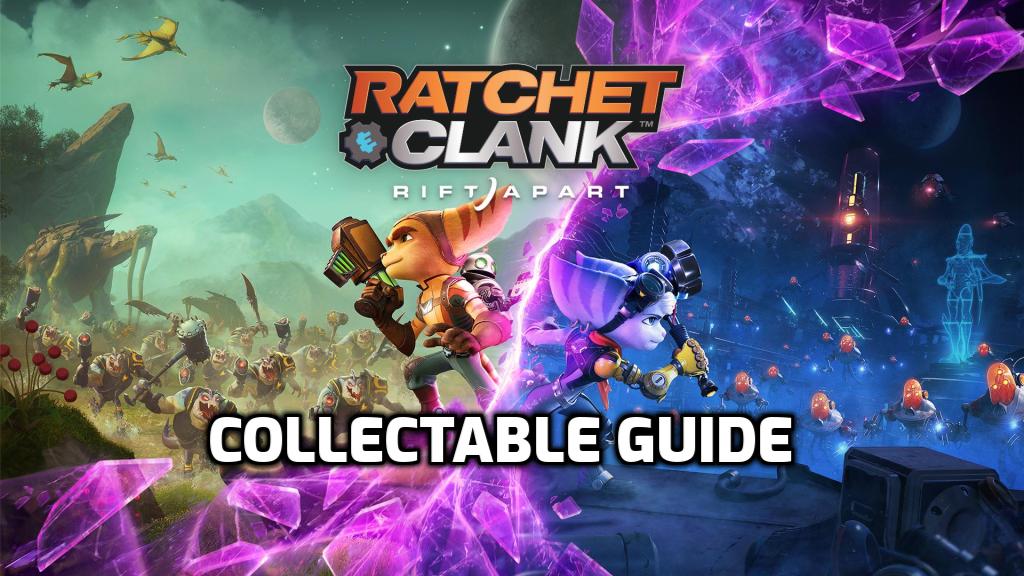 Before you go digging into collectable videos, there is actually a treasure map that will reveal the location of every collectable on the game’s map. The collectable map is found on the pirate world. You will hear Ratchet talk about this secret area that is being guarded by lots of pirate robots.

Blast your way through all of the pirates in the disco and when you get to the roof, you will find a treasure chest that contains the collectable treasure map. From here, the location of the collectables will be revealed on the map. This is super handy if you are missing one or two items and do not know which ones.

How To View Collectable Progress

There is a collectable menu that you can view when you press the touchpad. This will allow you to see all of the cool things you have gotten from the gold bolts. If you are looking to clean up the remaining collectable items that you have missed, you will need to return to your ship.

On the planet navigation menu, you will be able to see the number of gold bolts, armor and spybots that you have left to find on this planet. The same stats can also be viewed when you press the touchpad and view the level map while on the planet. This will quickly help you find which planets you need to return with. Combined with the treasure map, you shouldn’t need too much help finding the outstanding collectable items…with the exception of those pesky cragger bears!

Gold bolts are the most notable collectable in this game as they have been part of the franchise for a very long time. Each planet will have 2 or 3 of these to create a grand total of 25 gold bolts that you will need to collect to get the trophy. The video guide below will show you where to find all of the gold bolts in Rift Apart

What is the Point in Collecting Gold Bolts in Rift Apart?

Gold bolts do not provide any direct benefit to the gameplay but after you have collected enough, you will notice that the games collectable menu will offer you some pretty cool game modifiers that range from skin changes to infinite ammo. You will be able to turn these modifiers on from the menu by pressing the touchpad and navigating over.

There are 10 spybots to collect in Rift Apart. They are hidden a little better than the gold bolts are but with a little digging in an area, you can normally find out where they are.

What Reward Do You Get For Collecting All Spybots?

There are only 10 spybots, when you collect them all, you need to go back to Ms Zirkon for a secret weapon. Despite it being a secret, the game spoils it from the status menu on the PS5 by tracking your progress toward it. The fact that these are Ryno spybots also gives you a little bit of a hint if you have played any of the previous games in the Ratchet & Clank series.

When you collect all the spybots, Ms Zirkon will reward you with the Ryno 8 weapon. Not the well known Ryno V (5) but the Ryno 7, which becomes the Ryno Infinity when you upgrade it. What does the weapon do, well why not check out the video below?

Armour is generally received as a reward for completing the pocket dimensions but there are a few instances where it will be given to you for something else such as a side quest reward or just for reaching a hidden location.

There are no armour pieces that are particularly difficult to obtain. Since the pocket dimensions are easy to see on the map, it won’t take much effort to find all of the armour without a collectable guide. If there is still one or two pieces you are missing, check out the video guide below for the location of all of the armour pieces in the game.

How does the armour bonus work?

Can You Mix Armour Pieces For a Bonus?

If you mix different armour pieces together, will you get a random mix of multiple bonuses that come with each armour set?

Craiggerbears are something new and are a little different from the other collectables in the game. There is a gold trophy for collecting them all but there is no easy way to track them from the planet map like you can with all of the other collectables. This makes them a little more challenging to find from this alone. Take it into consideration that they are also a hell of a lot harder to see when you are roaming around that it makes them very easy to miss.

If you are looking to get the platinum trophy in Ratchet & Clank: Rift Apart, then you will most definitely need to use a cragger beat collectable guide in order to find all of them. Check out the video guide below for the location of every cragger bear in Rift Apart.

What is the reward for collecting all Craigger Bears?

Apart from the gold trophy, what else do you get for collecting all of the cragger bears in Rift Apart? A gold trophy is all you get, unfortunately, or fortunately, depends on whether you are interested in getting the platinum trophy or not.