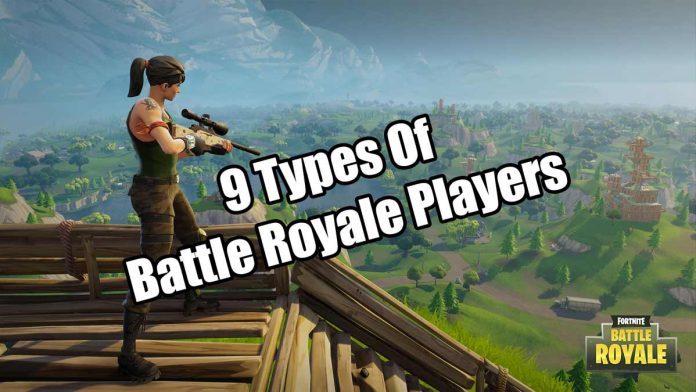 Builders will never let the fact that there are 99 other players in the game that are out to kill them get in the way of their dreams. While the rest of us are out there scavenging for supplies, hoping to stay quiet and in general trying not to be noticed, the builders are out building a stairway to heaven. How these guys manage to obtain such a vast amount of resources is a mystery, but a successful builder can often have a complex system of floating roads all over the map.

Most of us start a game and immediately look for supplies, with the hope that there is no one else nearby. Even if there is no one around, the kamikaze warrior still finds a way to get killed. No matter how many games you play, you will always find that there are some players who have been killed before you even land on the ground. How the hell do they die so fast?

Arguably one of the most efficient types of player to be, but it takes a lot of skill and practice to be a good sniper, it also requires you to be a complete dick! There is nothing more infuriating than making your way to the combat zone with a ton of kick ass gear, ready to take on everyone only to end up getting sniped as you make your way to your destination.

This guy always seems to have a rocket launcher and a seemingly infinite number of rockets. You and your 6 bullets for a pipe pistol are never a match when one of these guys appears out of thin air and starts hurling rockets in your direction. Jump all you like, this guy has enough rockets to take out half of the game.

Although there are game modes without teams, the Lone Ranger likes to play Fortnite with a team and then proceeds to completely ignore them. Why settle for coming first overall when you can be the best on your team and the best in the game, at the same time! Don’t expect to get any support from this guy, in fact, expect for him to do his best to avoid you completely.

There is nothing worse than ending up on a team with someone who thinks this is Minecraft and the goal is to gather supplies and build a fort. Having spent half the game building an epic fort then end up having to evacuate when the storm circle gets too small and all of their hard work is forgotten. The Minecraft guys will never help you if you get downed, as this will cut into harvesting time!

This person is here for a chat and playing the game is a means to an end. You can often get a lot of entertainment from these kinds of people. Their kill count stays low, but their headset is ready to overheat.

This is what most players THINK they are, but in reality, a very low amount of players actually play the game without sticking to any particular play style. However, when you find you are playing with someone who can go from building a fort, to nuking enemies to suddenly hiding in a bush to snipe, enemies, you can’t help but be impressed. Fortnite is not an easy game to master as there is so much on the line