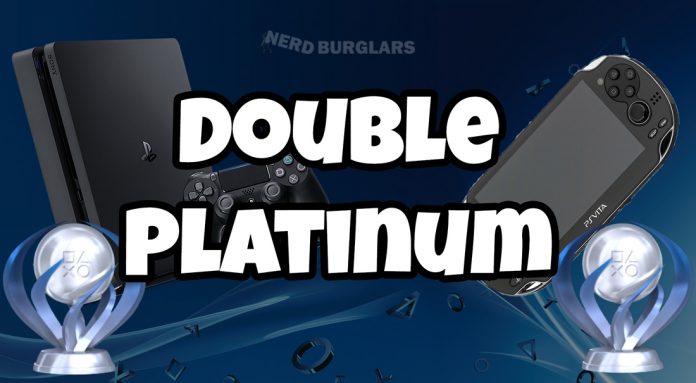 A double platinum is a gem in the trophy hunting community. What it normally means is that a game that was released on the PS4 and the Vita have separate trophy lists. Meaning you can get the platinum trophy twice. A lot of games are also cross buy which means you pay once and get the game on the PS4 and the Vita. Games with double platinums are fairly uncommon, but when they happen, they do a lot of good for your trophy collection.

Below is a list of easy Playstation games that come with double platinums. It is worth noting that just because a game is on the PS4 and Vita, does not mean it will have 2 platinums. It is more common for games to share trophy lists.

I am aware that there are plenty of other games that do have double platinums like the PS2 remasters and stuff. These are often 10+ hours and some can be very hard. This is a list of games with easy to unlock double platinums. A link to the trophy guide will be included below each.

If there are any games that I have left out that would fit this list, leave a comment below.

Can’t get much easier than this really. Tap the hell out of a jar of mayo to get trophies. Once you get the platinum with the PS4, load up the Vita and do it all over again. You hand will probably be sore after this. So long as you aren’t covered mayo it will be all good.

Sound shapes was probably the first game that the concept of a double platinum occurred. It is also one of the very limited number of games with a triple platinum. This means it has a platinum on Ps4, Vita AND Ps3. There is also a big standout with Sound Shapes from other games with double platinums. The cross save feature allows you to beat the game once, upload the game save. Then on the other platforms, you can download the save and get the trophies without having to lift a finger.

This game is also multi region. You can get this platinum 5 times with a single account if you really want to go to this extreme!

I REALLY hated this game. It was an incredibly boring grind. It was however an easy platinum. The Vita version of the game has some bugs that make the trophies a little harder to unlock, but its still an easy game with double platinum.

Do you like Streets of Rage? Well you are going to think this game is a piece of shit in comparison! This game is a bit like streets of rage except it sucks. The platinum is quick easy and there are 2 of them. It’s the only reason you should play this.

The vita version of this game is super easy since you can turn of the ink…which just leaves you with the splosion part. The game isnt that hard to begin with. You can likely get both platinums on PS4 and Vita in under an hour.

This game has a great sense of humor and is one of the more enjoyable games with a double platinum. The downside is the game is a few hours long (short compared to most games though. Getting the platinum the second time will feel like a bit of a chore. There are also some missable trophies, so you will need to stay tuned in the second time around to avoid any mistakes.

Little Adventure On The Prairie

Play this one on the Ps4 first so that you can get used to how crap it is. The game is very quick to beat and the list requires you to beat like 12 levels in the game. You will be amazed at how this game even made it to the store, never mind how it ended up with a double platinum.

I hated this game the first time I platinumed it. However, after getting it and looking back, the game wasn’t that bad. It can be a bit tough at times but the controls are actually good. No laggy jumps or any unfair crap. When you die, it was your fault, you can’t blame it on the game. This game is better than Midnight Deluxe, but that isn’t saying much. This game has a double platinum, but if you buy it from the US, you can get the platinum a third time on PS4.

Midnight’s less enjoyable excursion. The game is sort of like Angry Bird but with all of the fun parts taken away. It’s a cross buy platinum and also has a double platinum so who can complain!

It’s like someone took space invaders from the 70s and then did nothing at all to improve it. You might say the game didn’t need improving, well then we didn’t need Super Destronaut. If its trophies you are looking for, 30 minutes of your life will get you both platinums, very easy list.

One of the easiest of the easy. 10-15 mins to get the platinum each time. Perfect game for those looking to boost the number of platinums. This game exists purely for the double platinum.

Sort of like Super Destronaut in that it’s a modern take on a classic style of game that hasn’t done anything to improve on the original formula. It doesn’t take long to get the platinum though. The Vita version has some limitations. Since the trophy list is all based on amount of enemies killed, it takes a little more work to get the platinum on the Vita. Both are still super easy.

This is one of the most enjoyable puzzle games that will make it onto any trophy hunters shameless list. If you use a guide, you can get through this game in no time at all. Can take some time if you want to go about it properly and solve all the puzzles. Unlike a lot of games from Ratalaika, you need to complete the entire game to get the platinum. This one is much easier to beat the second time around.

Who doesn’t know about this game by now. This game has a triple platinum, but it is not cross buy, in most cases. This means you will have to buy the game more than once. The PS3 and Vita versions of the game have a much shorter and easier trophy list when compared to that of the PS4. Whichever you play, the platinum is simple on all platforms.