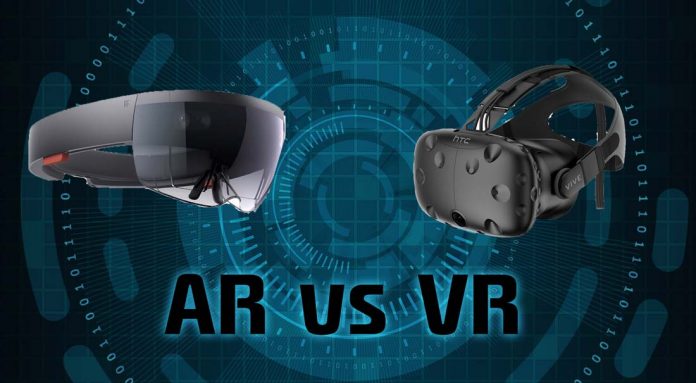 Acronyms are confusing at the best of times. When it comes to emerging gaming tech, AR and VR are two that most people hear a lot. They both end in Reality, that must mean something right? They are both similar in some ways, but there is a fairly big difference between AR and VR

Let’s start with virtual reality (VR). We all know this stands for virtual reality. It has become fairly mainstream with a lot of VR content being easily available through most smartphones. People sure do love posting videos of their grandma using some VR app for the first time.

VR is generally made up of some sort of box that will completely obstruct the person’s vision while they wear it. A screens inside the box will then provide the “reality” aspect of it. The concept isn’t too far away from 3D. There is a screen for each eye, just like there was a colored lens with 3 There was the red for one eye and the blue for the other (the more modern 3d isn’t so easy to explain, but works the same).

Having a video feed for each eye will give the user a realistic sense of depth and immersion into the content being displayed. People that have a high end smartphone can literally use a cardboard box (Google cardboard) to experience VR. However, for the best experience, particularly for gaming, a dedicated VR headset like the HTC Vive or the Oculus Rift is the way to go.

Augmented reality (AR)  is significantly different to VR in how it delivers the reality aspect. Where VR is an entirely virtual environment that you are submerged into, AR uses the real reality…if that makes any sense. In other words, AR will modify the real world.

AR has been made highly popular throughout numerous sci fi movies and TV shows over the years. A pair of fancy pants glasses will be put on and suddenly the person wearing it will have the ability to see through walls and shit. While we are nowhere near this kind of tech in the real world, great advancements are being made in this area.

The Google Glass was once of the first mainstream AR devices. It was a pair of glasses that would overlay virtual object onto the lens. It was more of an extension of the smartphone, similar to how smart watches work. You could get directions, see notifications, get weather etc. The device was a commercial failure, it was responsible for kickstarting the area of AR.

Like most modern tech that comes out, people are usually eager to see how it can be applied to video games. This is where the Microsoft Hololens swoops in. This device “appears”, and I use the word appears with some skepticism, to offer an immersion experience that is unlike any other. The demo of someone playing Minecraft on a table shows exactly how interaction with the real world should be executed. A computer generated world is placed on top of the table and the user can then use their hands to alter it. The hololens has the ability to overlay an incredible amount of digital information onto the real world. The fear is that it might be too good to be true.

Does this mean AR is better than VR?

There is certainly some crossover between the virtual and augmented realities, but as of right now, it doesn’t seem like one tech will replace the other. There is still a fairly significant difference between AR and VR when you see how the technology is integrated into modern life. The future of reality technology will more than likely include both systems.

AR experiences are much better suited to training and to help the wearer achieve certain tasks and duties much more easily. AR could be considered a more useful day to day technology. Think of how useful it would be for a police officer to have some AR glasses that would help them dodge an incoming attacker, spot/track a criminal in a crowd or pull up information from a central police database. All while executing their job as normal.

The VR experience is mostly geared toward entertainment. Since your eyes and often ears are covered, people will be prone to injury if they try to move, so VR will never allow someone to execute a job. The goal for VR seems to take as many of our senses and have them stimulated by the virtual world. It has the potential to become a fantastic training tool once we see additional wearable gear make it into the mainstream market.

I don’t know what it takes to train to be a fireman, but I am sure they do not throw them into burning buildings on the first week. A consequence free method of putting someone into a dangerous situation to train them how to act would be massively beneficial for new recruits. At present we lack some of the technology to really do this, but with VR we could throw people into numerous dangerous scenarios to train them how to react without risking injury.

VR currently lacks the means to stimulate all of our senses (don’t make this dirty). Without a multi direction treadmill we are very limited to how and where we can move. Without full body haptic feedback, the virtual reality is not quite ready to give a fully immersive experience. VR headsets can fool our eyes into thinking we are in a real world, but the rest of our body is not so easily fooled. Motion sickness is an unpleasant side effect of our bodies not being all that happy with the VR immersion. We will cernately see technology come on board over the next few years that will alleviate this, turning the virtual reality into something that is indistinguishable from the real world. It is only when you look at the potential of this tech that you see why everyone has gotten so excited about where we are heading.