Nerdburglars Gaming
Home Blog Is It Time To Give Duke Nukem Another Try? 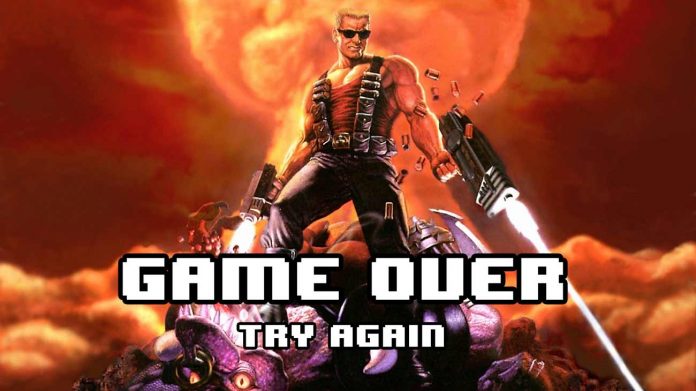 I would consider Duke Nukem to be a bit of a troubled franchise. It released back in a day when first-person shooters were in their infancy and it left a massive legacy. This legacy has done more harm than good in attempts to bring the franchise back to life. Let’s face it, a modern Duke Nukem game will never be able to fill the shoes that its legacy holds, but that doesn’t mean we can’t have Duke Nukem game that is good. Duke Nukem Forever was the last entry in the Duke Nukem series and generally speaking was met with a lot of disappointment. I enjoyed the game, but I played it about 6 months after release, knowing full well it was going to be mediocre at best. However, Duke Nukem Forever was sort of doomed from the start and was a poor attempt at a revival of the franchise. There is still some hope for the series if it was put in the right hands, it would be great to see a new Duke Nukem game.

The first Duke Nukem game I played was on the PS1, pretty sure it was Time to Kill. I was around 8 at the time so a lot of the humour was lost on me, but I really loved the game. I hadn’t played many 3D games before and this one was crazy with all the guns and killing (I didn’t turn out to be a murderer despite what all those mothers with sticks up their asses say about video games impacting children). As I got older, I eventually played the other games and most recently I played the 20th-anniversary remake of Duke Nukem, which I actually had a blast playing. I would by no means put Duke Nukem in my list of favourite franchises, but I have a different sort of love for the games. I was a little let down, like everyone else, that Duke Nukem Forever sucked. I would hate for this game to be the final nail in the coffin.

Duke Nukem Forever was in development for what felt like forever. Quite ironically the abbreviation of the game was DNF which is often used as an acronym for “Did Not Finish”, which was quite fitting for a game that seemed like it was never getting released. There were even some jokes aimed at DNF not releasing in the parody game “Eat Lead”. The game took around 14 years to make it to our screens and the end product was not what people had expected. Everything was dated and poor, it was like they had put a fresh coat of paint on a game that should have been released in the early 2000s. It wasn’t terrible, but it could have been SO much better. I really think the game could have been good, it was nothing to do with Duke, it was 3D Realms. They took 12 years to create a game that was just not up to scratch. After Gearbox took over, they finished the game and released it, but it was too late to really save it.

Gearbox/Take-Two now own the Duke Nukem franchise and there were actually plans for them to help out a team of modders who were going to remake Duke Nukem 3D called Duke Nukem Reloaded. This project was put on hold due to DNF getting such bad reviews. According to the dev team handling the remake, they were forced to stop saying the following “The problem was that Reloaded, in its then present state, was both a prettier and better game than Forever was. So they [Gearbox] could under no circumstances allow us [Interceptor] to publish it, show it, or do anything at all with it, because it would destroy the sales-opportunities they had left in Forever.”. This sucks a lot, but at the end of the day, this is all politics and distracts from what matters, us getting a new Duke Nukem game. A remake of the classic game would be cool, but Duke needs to get thrown into a modern world.

Duke Nukem is not officially dead and even if it was, these things can always be brought back to life. It is understandable that they would be putting a focus on other franchises that are more guaranteed to make money, but in the right hands Duke Nukem could be brought back in a much better and more modern experience than what we got with DNF. Duke Nukem is no longer in the hands of 3D Realms, which means it would be developed by a studio with experience building modern games. The only real issue is cost, or is it? As far as modern game development goes, people have high expectations for the story and this can often drive up development costs as the animation, assets and acting required to build this doesn’t come quick or cheap. Duke Nukem is a different world completely. I would almost expect the game disc for a new Duke Nukem game to be made of cheese because this is everything that I expect and want from a story involving Duke. Realistically, the cost of developing a game like Duke Nukem would be considerably less than games that focus heavily on a detailed narrative. Then again maybe Duke Nukem would work as an open world game…Grand Theft Nukem!

I would group the Duke Nukem franchise with Doom and Wolfenstein. They all came out in a time when they were unique and new. There were very few games like them. Generally speaking, up until around 2014, all 3 of these franchises had failed to be revived to their former glory. Doom 3 was a good game, but It wasn’t really Doom, it was just a horror game with some references to Doom. Wolfenstein was revived in 2009 and the game was not all that good. It didn’t look like these classic franchises had a place in the modern world of gaming. That was until 2014 came around and Machine Games released Wolfenstein: The New Order and blew all of our socks off. Since then the series has had 2 more releases and we can say for sure that Wolfenstein is back and it rocks! Doom also got a revival in 2016 which was also fantastic and was received very well by critics. I’m pretty sure we will see more of Doom over the next few years. These 2 examples show that classic franchises can be revived if done correctly, it just takes a team who are passionate about the game and not a publisher who is passionate about money.

I am sure Gearbox is a busy studio these days, but it is starting to feel like its Dukes time to shine. Duke needs to be revived so he can live on the shelves along with B.J. Blazkowicz and Doomguy. Other developers have done a great job at reviving classic franchises, all that’s left is Duke Nukem. The trifecta of classic first-person shooters needs to be with us in the modern day of gaming.