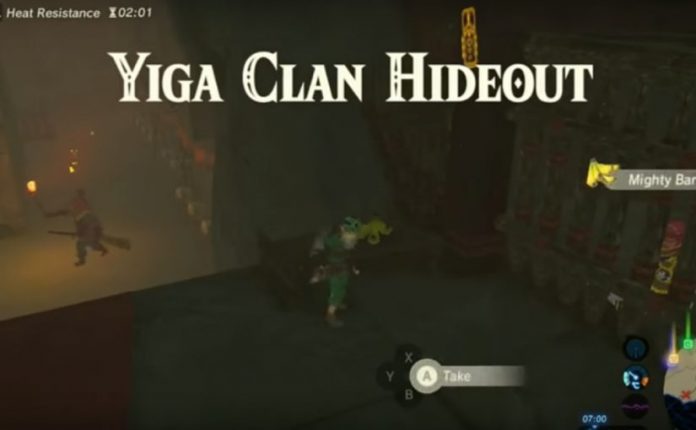 So, you are likely here because this awful frustrating cave has driven you crazy? If not, I wish I was you because this place really…really pissed me off. You have been tasked by the Gerudo to get back the stolen Thunder Helm from the Yiga Clan Hideout. This is all fine and dandy at first, but once you are faced with the challenge of only being able to use stealth, this place can become a bit of a hellhole. Thankfully after an hour or so of almost smashing my controller off the wall, I found a quick way to get this done. So without wasting any more time, here is my Yiga Clan hideout walkthrough.

This is the general plan. Use stealth, don’t kill anyone and throw down bananas like its happy hour at the monkey bar. Stick to this plan and things will be easy. If you have unlocked Revali’s Gale, the only hard part of the hideout will become considerably easier.

There are 2 enemies in the first room. Don’t even bother with the first guy. Climb up on the column he is walking around and glide over the fence to the next section. Go to your inventory and hold a banana. Throw this ahead of the guy guarding the wall. He will get a boner and go running for it. This is your chance to slip around the other side and through the door into the next area.

Head up the ladder that is ahead of you. At the end of this area, you will find a banquet of bananas. You might as well take them all. You won’t need them all here, but they can be cooked up later to make some tasty recipes. Walk back to the section of the balcony that is missing a wall and look down. You will see a few guards roaming around. Hop down onto the red carpet that is on top of the pillar. If you have Revali’s gale, use it to jump onto the central pillar that has a chest on it (and skip the next paragraph). If not, look to the left corner of the room and you will see a ladder. This is where you need to get to.

Glide down and throw a banana to the right side of the block that the guy is walking around. Once he spots, it carefully makes a break for the ladder and climbs to the top. Make sure to throw the banana fairly far to the right. He will see it from a distance and buy you more time. You can run over to the central column and open the chest, there are 100 rupees inside.

Now that you are on the central column with the chest, make your way toward the exit. There is a guard standing in front of this door too. Before dealing with him. Walk around the scaffold to get above the door that he is guarding. If you look to the right there is a ladder. If you glide of this ledge and make it into the hole in the wall, you will find 2 chests both with 300 Rupees each!

The goal here is to distract the guard with a banana and you can drop down and make it out the final door. Stand as close as possible to the door on the scaffold above. Hold a banana and if you press up (or maybe down) on the D-pad you can throw the banana rather than drop it. Throw it as far away from the door as you can, while still being in the guard’s line of sight. Once he spots it, make a run for it. Drop down and gently land with the glider. Walkthrough the door and down the hall. Once you are in the room with the chest, you are safe. No guard will come down to you unless you were spotted. I won’t explain anymore since the hard part is over, you just need to figure out the puzzle here.

I hope this helps and saves you from a broken controller. It was one of the harder areas that Breath of the Wild threw at me, so it is good to get this out of the way as easily as possible.