Nerdburglars Gaming
Home Article Why has there not been a Blood Dragon 2? 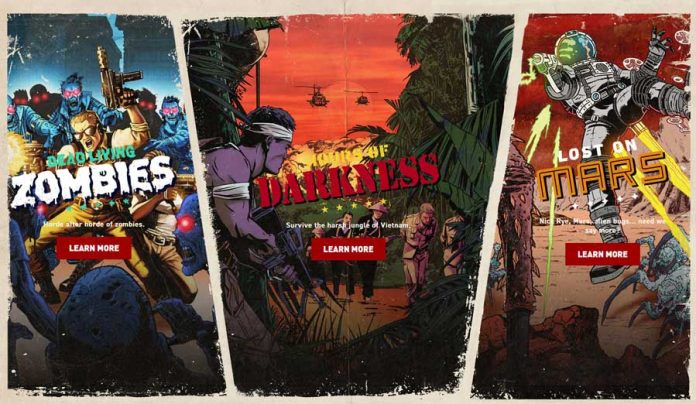 After the dust began to settle following the release of Far Cry 5, Ubisoft have launched a new game. Far Cry New Dawn is the latest entry in the Far Cry franchise. Like many other big game franchises, this is a sort of spin off using the game engine, making it more of a standalone expansion than a new game. It’s an easy to make money without having to deal with the lower price expectation for DLC.

Far cry 5 received three, fairly unique DLC packs. Unique in both the way they are different from each other but also in how they differ from the core game. The team behind Far Cry have quite the track record. The peak for this being Blood Dragon. The 1980s, Tron-esque, themed cyber shooter broke away from every theme that Far Cry 3 was built upon to not only build one of the most memorable events in the game but also one of the most memorable DLC events I have ever played.

Blood Dragon was incredibly well received by everyone. It was cheesy as fuck and that’s what I loved. Cyber dinosaurs, laser beams and buckets of sarcasm and cliche lines were in high supply and it was fantastic. The acclaim was very well deserved. There was more than enough potential to turn this into something more than DLC. With the success and potential it makes you wonder why we have not seen a sequel to Blood Dragon.

Some might say that the original was perfect and that we do not need a Blood Dragon 2. This is worth debating. I don’t see why another game would do anything to hurt the original. Something like Blood Dragon is not built in it’s clever plots and originality. In fact, the entire game was built on an 80s cliche. A follow up would almost be living up to the reputation.

HD Remakes are being spat out at a crazy high pace these days. Im sure the odds of there being a Far Cry 3 Blood Dragon HD are as high as seeing Blood Dragon 2. It feels like there is more potential to break this away into its own franchise.

Creating a new game franchise can be very risky. Breaking away from a tried and trusted game to make something new can be an expensive mistake. Blood Dragon already made a name for itself. Bar having Far Cry in the name, it doesn’t resemble any of the visual characteristics that commonly make up games in this franchise.

Cyberpunk 2077 is the only game in the pipeline that sort of goes into this genre, but I think it is a stretch too far to be expecting neon dinosaurs to be roaming around the place. Blood Dragon 2 is the only hope at the moment for a high quality video game that is full on cyber crazy. Will have to keep the fingers crossed for some epic synth chords to open for a trailer in some future Ubisoft press conference.