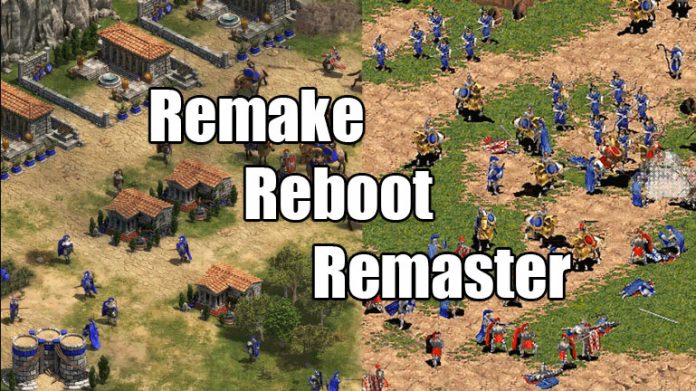 Over the past few years, we have been seeing a lot of games re-released on modern systems. There are various reasons this is done and even more reasons why it is proving to be a success. When it comes to games that get a re-release it is usually tagged as being a remake, a remaster or a reboot. What is the difference between these terms and do they alter the end product? Let’s discuss remake vs remaster vs reboot and how they differ from each other.

The short answer here is yes, they are all different. So let’s start with a remaster as these are often the most simple form of a video game re-release. Back in the previous console generation (PS3 & Xbox 360) we saw a lot of games from the PS2 era get released as HD remakes. This was quite confusing as these were not actually remakes at all, they were remastered.

A remaster is when you take an existing game, make some tweaks and improvements and remaster it on a new platform. This is typically the fastest as the game is already built and functional. All they really do is port it to another system and improve aspects of the game to take advantage of what the new system has available e.g. Trophies/achievements, network features, better resolution etc.

The word remake is often used to describe all 3 of these things and it is incorrect. A remake means to make something again. The recent release of the Crash Bandicoot trilogy is a good example of what a remake is. They take an existing game and completely remake it from the ground up. The end goal is for this new game to be the same as the old game, but with as many aspects as possible improved upon without chaining the core game. Remakes are often performed when a game has gotten so old that the assets in the game are of no use and even the best technology to remaster them is no use.

GTA5 was released on the PS3 and Xbox 360 and a few months later the next generation of consoles hit the shelves. A full remake of this game would be pointless. The game is already built using an up to date game engine with modern programming practices and high-quality assets. Assets which are often created to a high standard and downgraded for consoles. This made GTA a perfect example for a remaster instead of a remake.

To put the focus on remake vs remaster, there is a good way to determine when one is better than the other. A game released on the PS1 is going to be hitting 20 years old and running on a game engine that has likely gotten so old it can’t be reused. In cases like this, the game on paper is all that can be salvaged as any technical assets are so outdated it’s faster to start again. A game released a few years back is going to be less trouble. In some cases, the assets from a last-gen game can be almost as good as current games. Remaking this game from scratch makes no sense. When the game assets are still good to today’s standards, the game gets a remaster.

The final and less common of the 3 is a reboot. A reboot is more often something that happens to a franchise rather than a specific game. We see reboots every year in the movie industry because they are always fucking them up. A reboot is when you take an old franchise that has lost its appeal and take it in a new direction. Wolfenstein: The New Order was released back in 2014 is a perfect example of a reboot. It is also an example of a reboot done correctly. Wolfenstein hit its peak with Return To Castle Wolfenstein and ended up vanishing for many years until a new entry was released in 2009. This game was mediocre and felt like the end of the franchise until Machine Games took over and rebooted the franchise. Things went in a new industrial sci-fi direction and since then the game has become one of the biggest FPS franchises in recent years.

A reboot is similar in a way to a remake in that a completely new game is going to be created. It may be based on a past game or it may be an entirely different story and setting that is influenced by the original. You could say that the Zelda series gets a reboot every release. Same story, same setting, same characters, but it is a different game that is no directly based on a past game.

If someone were to ask which is better, a reboot, a remake or a remaster, the answer is none. All 3 are very different and often confused terms to describe a very different project. Deciding which one is best is determined on the source material. Older games are better suited to a remake, newer games suit a remaster and old/dead franchises get rebooted.