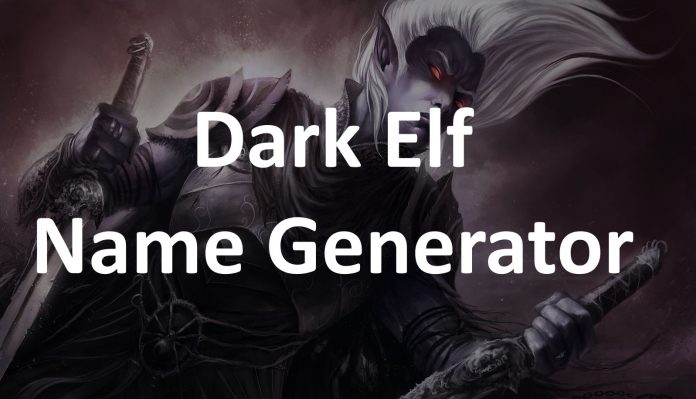 When it comes to fantasy races, the elves sure do have a lot of subraces. Dark elves are, as their name would imply, a darker and deceptive race of elves. They are known, as most elves are for their beauty but they differ when it comes to their personalities. Dark elves are not to be trusted. This tool is a dark elf name generator. It will give you lots of cool name suggestions you can use for characters.

To start generating ideas, click on the button below and it will generate some random names for you to use for dark elves. It can be a bit tricky to get it right as the lore behind them tends to differ quite a bit based on the fantasy setting you are based in. Any feedback on this is welcome. Start clicking the button below to get some dark elf names.

What are Dark Elves?

Dark Elves are a common subdivision of the fantasy elf race. They possess a lot of the same physical and character traits that are common with the elf as a species. Dark elves differ in that they are far more cruel and untrustworthy, a trait that is not common at all with the standard elf personality.

Dark elves tend to have a darker skin tone and dress differently to regular elves. This is not where the name comes from. The visual appearance of a dark elf is more a reflection of their inner darkness and serves as a way for people to more easily identify them from the standard elves.

If you are looking for some female name suggestions using the dark elf name generator above will give you that. All you need to do is switch the gender toggle. This dropdown defaults to male, but you can switch it to female and it will end up generating some name ideas for women.

What universes are Dark Elves featured in?

Dark elves are quite common across many fantasy settings. One of the older and more well known would be in the works of J.R.R Tolkein. In modern media, they are used often in the Dungeon and Dragons franchise and in video games are featured in the Elder Scrolls Franchise. In the Elder Scrolls franchise, games like Skyrim and ESO, the Dunmer is the name given to dark elves who are based around the Morrowind region.