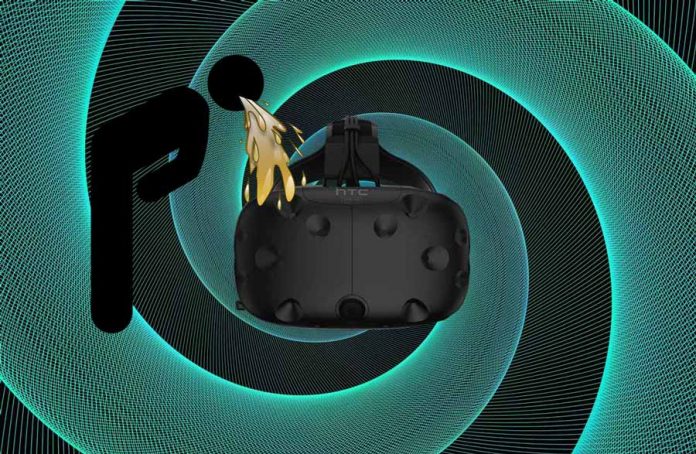 Depending on the game you may or may not experience motion sickness. There are things the player can do to avoid it and things that the developers can do. Those that care enough about their games will typically implement as many measures as they can but unfortunately for you, the person who feels like their stomach is twisted into a know, these measures are up to the developer. Thankfully there are still some things you can do.

I will split this up into two parts. Methods you can do yourself to help prevent VR motion sickness and things that games often have implemented to help. Obviously, not all games will implement these measures so the first part will be your best bet.

Seems like a bit of a weird phrase and it is not the most enjoyable thing, but it tends to be the most effective method. Those who get sick from VR games can train their body to adjust to it. By exposing yourself to games that trigger bad motion sickness, you will train your body to get more familiar with the experience.

This is sort of like exposing yourself to a sickness in order to up a tolerance to it. It will work though and once you do have your VR legs, it will open up a world of new games that you weren’t able to play before. As far as methods go to prevent VR motion sickness, this is not the quick fix solution you may have wanted, but it is the best long term solution. As you work through the methods below, your ultimate goal should be going toward this step. Just remember to ease yourself in gently. Do not try to go full speed into this. start with some games that are not too intense and work up toward the top.

2. Move with the game

Obviously I do not mean this literally, otherwise you would walk into the wall but if you can move with the game, it helps so much. Lets say you are playing Skyrim and are using free motion to move around. Rather than sit or stand still, walk/jog on the spot as your character is moving in game. This will mitigate if not completely remove the weird feeling you get when you move in game but not in real life.

The ultimate goal here is to have a 360 degree treadmill that will literally let you run around in the game. If you can’t replicate the action being performed in game, try to replicate the body position. The VR Worlds game has a luge game in it. Playing this standing up is rough as hell!! However, if you lie on your back and play the game as if you were on the sled, you don’t feel so bad.

Yea, I know what kind of stupid advice is this! The annoying warning messages are right though, particularly when it comes to VR. The sickness can be something that builds up when your eyes are boxed in too long. If you take a 5 minute break every hour and drink some water it will stop you getting dehydrated if you are sweating a lot, but it will also give your eyes a chance to briefly rest and hopefully reset the sickness timer.

Chances are, if you own these, you are going to use them, but if for any reason you do not, you should. Using the proper VR motion controllers will immerse you into the game further, making it feel more realistic and stop you feeling so weird while you play.

These controllers are currently limited to arms, so it wont do much for your feet movements until something new comes along (please be a multi direction treadmill!)

Now, I’m not talking about people who love you, I am talking about one that blows air at you. I guess as you move naturally, your generate some air resistance and your skin is familiar with this. Having a fan blow cool air at you will imitate this and help you feel a bit better.

There are often settings and options that you can tweak in game that will help you prevent VR motion sickness. Sometimes these are intentionally added by the developer and other times they are just part of the game. Not all games will have these options obviously, but if they are available, take them as it will help.

I will note that some of these options will hinder your attempts to get your VR legs as they will often remove the root cause of what was causing you to feel sick in the first place.

This is definitely the best way to prevent VR motion sickness of anything you can do. The reason why is that it will remove the root cause of what makes you sick, fluid movement. By removing the ability to move freely and teleport from one point to another, your body will not experience the motion of movement and as a result, will not make you sick. This only applies to games where it doesn’t defeat the purpose of the game. Not much point in being able to teleport in a racing game.

This is something that helped me a bit in windlands. The game will put a sort of transparent cage around you. The cage will help you feel like you are inside something and not moving freely. Sort of how you don’t feel sick when you move inside a car. This is because you are inside something else that is moving. Using this can be very useful for some people, but it is definitely one of the less used features to prevent VR motion sickness.

I don’t really know what the science is behind motion blur, but when we move fast in the real world, our eyes naturally blur things. Might be the whole 24fps thing our eyes have. Either way, when you are playing a game that is running at a high frame rate, the movement from A-B will be smooth and crisp, allowing you to see every frame. This might be good in some situations, but it is not good for VR. If the game has the ability to turn this on, make sure you do.