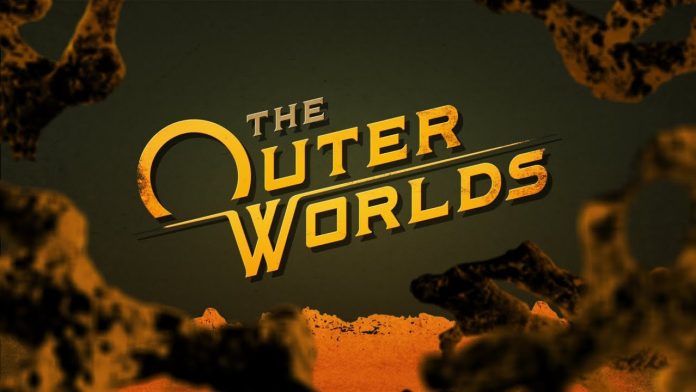 The “space western” setting is one that is oddly alluring. You would think that futuristic sci-fi wouldn’t mend well with the wild west, but somehow it does. Having proven themselves with Fallout: New Vegas, there are high expectations for Obsidian’s next jump into the genre with The Outer Worlds.

The moment you gain control, the visual style will be the first thing that jumps out. You find yourself on a retro-futuristic styled martian planet. The terrain isn’t all that foreign, but the fauna sure makes it feel like an alien planet. Oversized plants and shrubs will give you the immediate impression that you are far from earth.

Once you interact with your first NPC, the multiple option dialogue sequence will remind you of Fallout right away. From the animation and facial expressions of the person you are speaking with to the way in which the conversation flows. It’s a system that works well to guide some complicated story trees.

As you progress and invest skill points, earned when you level up, on conversation traits, you will be able to lie, persuade and intimidate others into getting your way. Having a tense situation crumble before you because you lack the silver tongue is exhilarating. It would have been nice if this could have been used more often, even for insignificant conversations.

The first person shooting mechanics follow most standard practices with additional elements influenced by the Fallout series. The ability to slow down time for a short period gives you the chance to line up some perfect shots to take out enemies.

The stealth mechanics work well enough for occasional use but it lacks any depth for you to be able to use it as a logical gameplay strategy. A marker above enemy heads is the best you get to help you stay hidden. You lack any gear to track enemies and you don’t have anything to help you avoid detection other than crouching in the long grass, which often lets you down.

Skill points can be spent on other useful traits outside of conversation skills. Lockpicking, medicine, engineering are passive skills that provide a lot of benefits when it comes to challenges in those respective areas.

The weapon selection is quite diverse but badly balanced. Automatic machine guns seem to do very little damage, even those that use heavy ammunition. There are several pistols using light ammo that will do far more damage to enemies. Energy rifles also feel underpowered, worsened by the fact that the projectiles travel quite slow giving enemies time to move out of the way if they are far enough from you.

The skills available for weapons don’t really do much in bettering your ability to use this weapon. You will never need a certain skill level to use a weapon, you can just use everything from the get go. Great in some ways, but when the balance is off, you find yourself sticking to what is best and never needing to change. There is no worthwhile reward for focusing your efforts on heavy weapons over pistols for example.

Melee weapons come in all shapes and forms, often enhanced with a sort of pseudo elemental power giving them additional burn, electrical or toxic damage. There isn’t much to the combat outside of mindlessly beating enemies to death. Effective, but not very exciting.

The story starts out quite strong, giving you the feeling that you are about to set off on a vast adventure, but it fails to live up to it. You only visit a few planets in the solar system and most of them are not as diverse and exciting as you would hope. It’s not all that easy to tell the difference between the different locations.

There were far too many quests that involved “go to this city and speak to X”, “now that you have spoken to X go back and tell {quest giver} what you discovered”. This was massively disappointing toward the end of the game where you had a fairly large string of quests that involved nothing more than traveling from A to B to have conversations. Conversations that should be had over radio comms.

Even with the excessive amount of message delivery quests, the game felt very short. It hit me by surprise when the game gave the “this is the point of no return” prompt. For a game like this, you would expect to sink a large amount of time into it.

Games from the Elder Scrolls and Fallout franchises have shown us the importance of a good side quest. A side quest that makes you forget what the main quest was even about is exactly what these types of games need. Sadly, the Outer Worlds doesn’t deliver much in this area. Very surprising when you consider what they did with New Vegas.

There were plenty of side quests, and they weren’t bad, but they didn’t break far enough away from what the main quest was doing. It never felt like a side quest was a whole new adventure. It was just a minor detour. A detour that never helped you see the fantastic world from a different perspective. You may as well have stuck a planet express sticker on the side of your spaceship.

The lack of mold-breaking side quests highlighted the overall issue with the narrative, the lack of impactful drama. It wasn’t for a lack of drama either. The entire colony is about to starve due to a lack of food. There is an imminent threat to all life, this should be enough to have you glued. It is just hard to find any reason to care.

Rather than embarking on a quest to find a miracle device of infinite power, you end up drowning in politics. It may be a more realistic portrayal of how a human colony would function out in space, but it doesn’t make you feel like much of a hero. Who needs to recover ancient alien devices when Bob needs you to pass on a message to John over on a different planet? You never really do much to feel that important or special. You are just some muscle who can get stuff done.

Exploring alien planets alone can get lonely, which is why you are allowed to recruit two companions to help you out. The companion system works far better than it does in similar games. They are more than pack mules that kill things for you.

Companions all have unique personalities. They level up and you can unlock perks that give both of you bonuses. The UI to manage your companion is also very smooth and easy to use. Equipping a new piece of armor or a weapon is done through the same menu you used to equip your own gear.

The UI, while allowing you to do everything you need, is quite cluttered and difficult to navigate. So much is crammed into one menu with different buttons to switch between all the tabs and sub-tabs. It just feels clunky and badly arranged.

The biggest problem is the lack of a shortcut to open the map. You open the menu and need to navigate to your map every time. If you close and reopen, you need to go back to the map again. It gets frustrating when you are flicking through menus and sub menus when all you wanted was to see where the nearest fast travel location is.

The greatest strength of Outer Worlds is the creative universe it is set in. From the brands that create the food to the corporations that employ people. So much care has gone into building a setting that has so much character.

Sometimes with genres like steampunk and space westerns, the content relies too heavily on the building blocks of the respective genre to create the setting. Outer Worlds uses its genre as a foundation to build so much more. This level is creativity is not something you see often and is incredibly hard to achieve with this level of success. The developer has really nailed this and has established what is sure to become a long-running franchise that only gets better and better.

8/10
What The Outer Worlds offers in artistic creativity, it lacks in quest diversity. Exploring the colony is really exciting and you will lose yourself in everything it has to offer. unfortunately, you will end up performing a lot of the same menial tasks throughout the relatively short campaign. You have access to an incredible world but the quests never take full advantage of it. There is far too much focus on the political problems of the colony and not enough action and adventure. You never feel like the hero of the story, you feel more like the middle man between the people that are actually important.
Pros
Cons