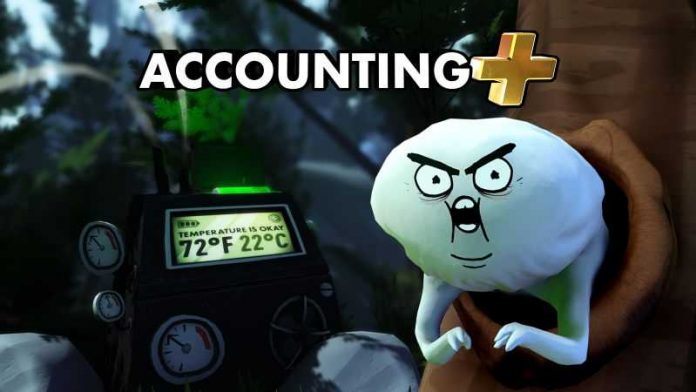 This game is fairly short and will likely take 1-2 hours for most people to complete. If you want to get through this game as fast as possible, this is the guide for you. In this guide, I will give an overall Accounting+ walkthrough, but I will also explain the fastest way to do things in order to make it a speedrun guide as well. You will find the speed run steps below each level description in the form of numbered bullet points.

To make this easier, I would suggest you play through the tutorial at the start of the game. It explains the controls and how everything works. It only takes 2 minutes to get through it. I will make an assumption that everyone understands the controls in this guide rather than explaining the buttons all the time. You can use this Accounting+ walkthrough as an easy way to get the platinum trophy too.

Most of this level is just spend listening to the phone. There is some funny dialogue here so it’s worth listening to. You will start in the middle of the office part with a phone ringing. Teleport over to the phone and hit the red button. Follow the instructions that the guy on the phone gives you. This involves lifting up the tape player on the desk, checking the file cabinet, hitting the phone a few times and eventually you find the tape and put it into the tape player. Once the goggles come out of the desk put them on.

If you are easily offended by bad language, turn down the volume as there is a lot of bad language in this level. There is a bonus level opportunity here that gives you access to an alternate ending. Teleport over to the birdhouse and take the seed out. Go over to the large pot and place the seed there. It doesn’t need to be buried or anything. When you come back here later a plant will have grown with VR goggles hanging off it that give you access to the alternative ending (it isn’t all that exciting or funny). Teleport over to the machine and take the green battery out of the top of the machine. Go over to the flower pot and you will see a tree stump to the right of it. Put the battery into the back of this. You can pick both items up at the same time which makes this process easier.

Start by pressing the red button on the radio. Once the teleport point appears, move over toward the group of people. They will instruct you to do some bad stuff. Around the area are a bunch of bad things to do. A porn mag, download a movie, spray paint the wall, drink beer and the level ending one, throw a brick through the window. Once you throw the brick the level ending will begin. (if you want a trophy, hold onto the brick for a long as time and exhaust the dialog, wait until you are told to throw the brick) Turn around and there will be a frog person with VR goggles in their ass. Put the goggles on.

Super quick level. Go over to the table and you can root around all of the junk. Look for a large knife. If you want to get an extra trophy, you can take the knife and drop it down the grate behind you (it will reappear on the table when you do). Use the knife to stab the king in the chest. Drag it down to slice him open. When this is done a phone will appear to your left. When you answer you will be told the VR goggles are inside the kings heart. Put your hand inside the kings guts and pull out his heart and put the goggles on.

Level 5 – Inside the King

This level allows you to access a bonus level. You can do this by teleporting over to the door behind you that has “secret level” on the front. If you knock a guy will answer and say you cant come in. If you knock a few times he will eventually tell you that you need a coin. You can now find this coin in the little cupboard behind you next to the green jar of stomach acid, but it will only be there if you have knocked on the door enough times. If you keep on knocking (for a long ass time) you get a trophy for befriending the door man. Depending on where you want to go, you can put the coin into the door or you can drink the stomach acid.

You will reach this level if you place the special coin into the secret door. The level cant be failed, so don’t worry about doing anything wrong. Go over to the alter and after some dialog a bunch of tapes appear. For me the correct tape was the red one with the stars on it. Once the tape is in, a rap will play and it will just word out whatever items you pick up from the alter. Just randomly pick up different things and play around until the demon appears. The level will end when the hand comes out of the portal.

This can be a slow level and a difficulty one to figure out. There is a lot of dialogue to get through so unless you want to read the speed run steps below, be prepared to do a lot of listening. To begin the trial, open up the case to the right of you. A small man will come out and begin defending you. You can pick him up and throw him away which will make another one come out. They will keep coming until you eventually throw one at the jury. When this happens you get sentenced to death. A device to behead you will come through the doors and you must put your heat into it to end the level.

Yep, your at the end of the game already. Start by taking the thing off your face. There are a few pointless things you can interact with at the moment, but the important thing is to lift up the shutter on the side of the van. You will see a bunch of cop cars chasing after you. After a few moments, the 2 guys in the back of the van will get shot and this prompts a gun to come out of the large crate on the ground close to the passenger seat of the van. Pick this up and go back to the window. Use this gun to blow up all of the cop cars and when the boss on the pirate ship arrives, keep shooting him until the ship blows up. Once the driver tells you to turn on the radio, you can mess around with it until a trophy pops up. Turn around and teleport to the back corner of the van where you started. The red box on the wall will have a machine gun inside. Use this to kill the driver and end the level.

You will now be back to the woods, but everything is on fire. To get a quick trophy, go over to the birdhouse and watch the tv for a minute or 2. If you planted the seed in the pot back when you were here first, there will be a pair of VR goggles hanging off of a plant that has now grown. Use them if you wish to end the level, otherwise, go and pick up the bomb. You will now need to wait until the bomb explodes to end the level.

Start by answering the phone. This is a long conversation that you can listen to if you wish. If you wait until the 2 guys on the phone have finished talking, it is possible to get a trophy for an alternative ending. Once they have finished talking, spin the whiteboard around a few times until a guys face appears and he starts talking to you. Once you are ready to finish this level, and the game, go over to the desk and pull open the little compartment that once had the tape player inside of it. There will be a gun inside, shoot yourself in the head to end the game.