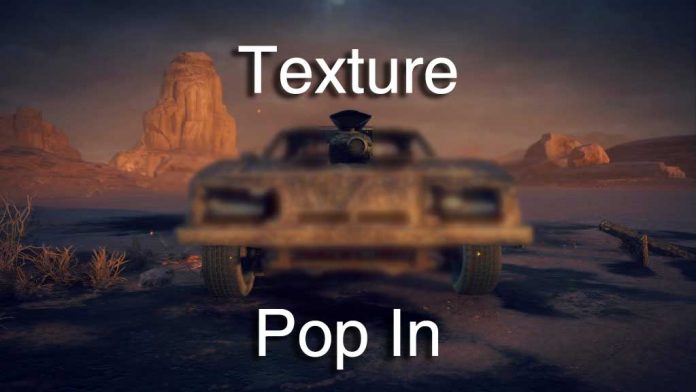 Have you ever been gaming and a level will load but everything looks all muddy and blurry. After a few seconds, everything will suddenly become clear and sharp? Don’t worry, you do not need glasses, this is something known as texture pop in. With the rise of HD gaming, texture pop in is something that has become far more noticeable than it once was before, but what is it and what is the cause?

What is texture pop in?

To understand why textures pop in, you first need to understand what is actually going on when a texture seems all blurry and then suddenly becomes a high quality image again.

When a game level is loading, the textures will need to be loaded from the disk and into memory. Larger images that are higher quality will take up more RAM. If every visible texture was loaded into memory during a game, there would be issues with memory. To keep this memory use down, lower quality textures will be loaded for object that are further away from the player. Since the player is far away, they are unlikely to notice the poor quality. It’s a win win!

What causes textures to load blurry at first?

Since low resolution images take up a small amount of memory, they can be loaded very quickly. As I mentioned above, they also consume a smaller amount of memory. To load a level up quickly, low resolution textures are ideal. This saves the user having to wait as the textures can finish loading once they are in the level itself.

If the disk is also busy for external tasks or is running slow, texture pop in may become more prevalent. Internal factors such as the game engine may also be at fault. Games built on the Unreal Engine are known for being plagued with texture pop in issues.

Why don’t older games have the same issue?

There are a few potential explanations for this. Texture pop in is unlikely to happen if you are playing an old game on a modern PC. Gaming hardware is far more powerful now than it was when the game came out. It should eat through everything the game throws at it. What about back in the day though? Texture pop in never seemed to be an issue 15 years ago.

Texture pop in has always been a thing, but back before high definition visuals, it wasn’t something that was as pronounced. The fully rendered texture was still a low quality image and could still be considered “muddy”. Combine this with the fact that you might have been playing on a CRT monitor, which will provide a lower quality image in general when compared to modern LCD screens, the muddy texture was further obscured.

Halo 2 was one of the more notable games where texture pop in was a very noticeable thing. The game had no load screens. Loading low res textures from a distance and loading in the higher quality when the player got closer was an intentional feature, it just didn’t work as well as expected.

Is there a way to stop it happening?

SSDs or solid state drives are known for their incredibly fast read and write speeds when compared to the more common spinning disk drives. With the ability to read and write far quicker, textures will load much quicker. This may not eliminate texture pop in that is a result of game engine or programming, but it will greatly reduce pop in caused by your read speeds.