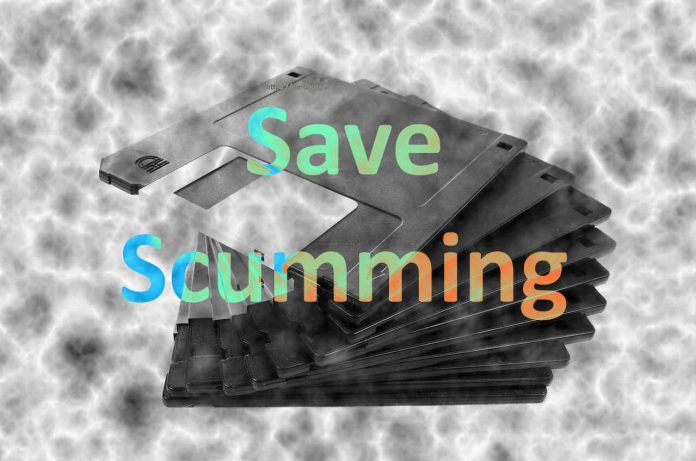 Save scumming is a bit of a weird term. It sounds filthy and a lot of people don’t know what it means. After discovering what it means, most gamers are likely guilty of it at some stage or other, particularly if you are an achievement or trophy hunter.

Save scumming is the practice of reloading your game save to undo a mistake or an action you are unhappy with. Let’s say you are playing an RPG and you make a conversation choice that turns the person hostile against you. Reloading the save to try and alter the outcome is called save scumming.

This practice is very common for trophy hunters who need to get a perfect run or complete very specific actions during a game run. Failure to do so, prevents the trophy from unlocking. Keeping a copy of a game save on a memory stick is a common method to prevent the game from autosaving over your active safe file, preventing you from being able to reload.

Problems with Save Scumming

The biggest issue from the gamer’s perspective is that you could actually miss out on a highly exciting in-game event. Yea, you screw up a conversation and end up having to kill someone. 10 hours down the road, this may lead to a new side quest or open up some really interesting elements of the game.

Another issue is that the player loses out on any sense of reward. Your success is no longer genuine. Yeah, you have your trophy or achievement but you had to do something that the game developer did not want you doing in order to get this win.

How Developers Prevent Save Scumming

It is always going to be impossible to prevent it fully, but there are many things developers can do to make the practice highly inconvenient. The first step starts on the console level (PC gamers will never be limited in this way). Copying a game save to a memory stick is a simple process and normally is, up until recently. For the PlayStation, Sony require you to close the game before you upload a game save. If you need to reload 10 times in a row for something that isn’t going your way, this is infuriating. This alone is enough to turn a lot of people away from doing it.

Developers can use autosaves on death or after decisions they feel the player may regret. This makes life difficult for save scummers, but it won’t stop them if they really want it done. The real way to prevent save scumming is to prevent players considering a certain event a failure they can’t undo.

Games with multiple endings are up against a difficult task here as a player may need to tick certain boxes to achieve an ending they want. Players can’t be expected to replay the entire game again in the hope they get it right this time around. A lot of games now make it possible to make one final decision that dictates the ending. Something that people are very critical of since it makes all your previous decisions pointless when the ending can be based onthe events of the final hour.

RTS games are terrible for getting players in a negative loop. You need kills to level up your soldiers to veteran. Once veteran they are highly powerful. The problem is that if those veteran soldiers die, you may not be at a point where you can train new soldiers to get to the same point. Reloading your save is the only option you have.

You can’t be a winner every time in gaming and if games change themselves too much to prevent the need for save scumming, there will be no real sense of right and wrong, success or failure. Games have come a long way to prevent save scumming, but it will remain a problem forever… assuming you see it as a problem in the first place.