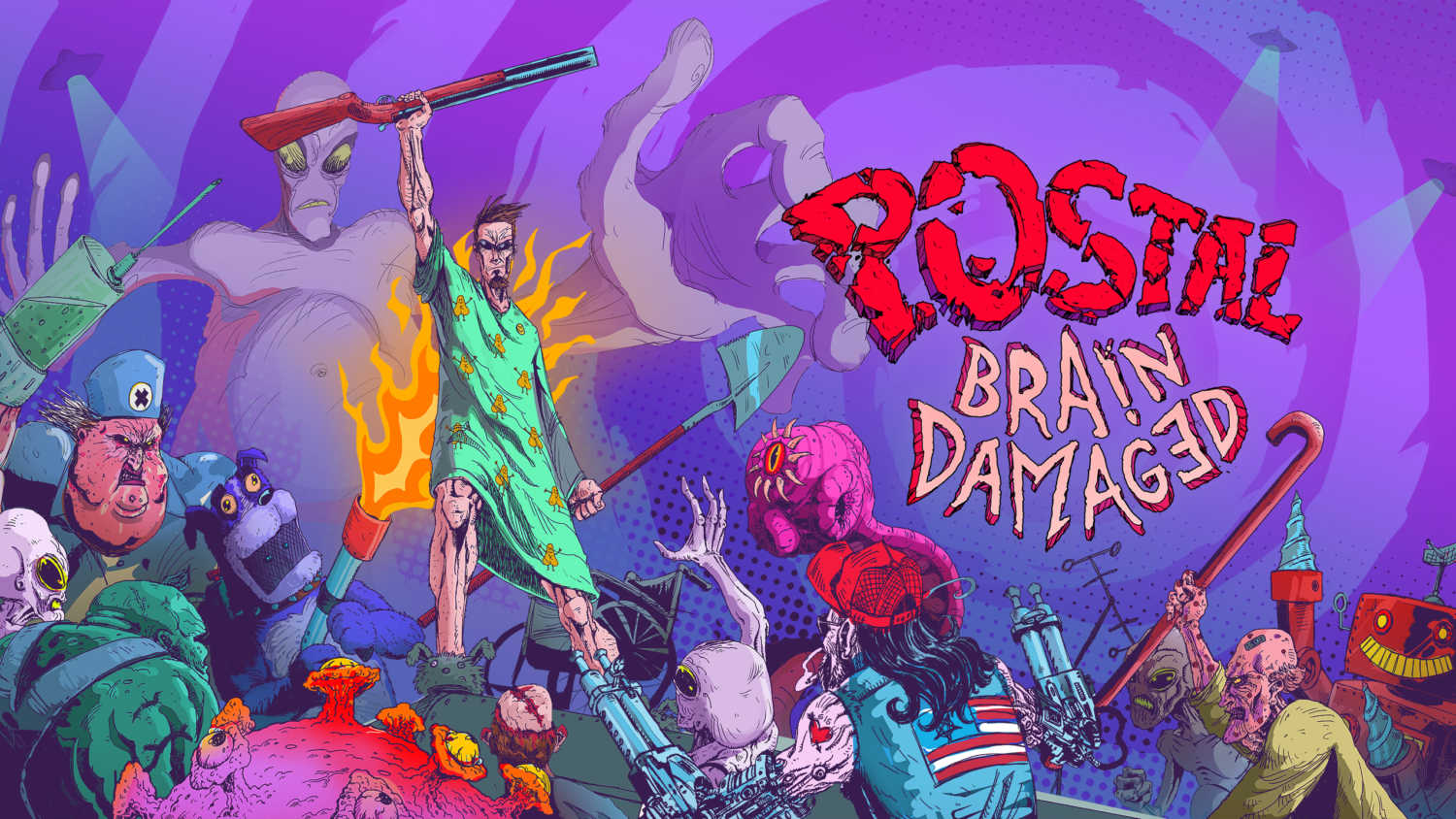 In an industry where game developers are constantly pushing the limitations of gaming hardware to produce larger and more realistic-looking games, a game like Postal Brain Damage really stands out from the crowd. A retro vibe that oozes early Duke Nukem, Serious Sam vibes is sure to catch the eye but is there enough substance to make this game fun?

Postal: Brain Damaged has an undeniable visual charm to it. It has the graphical quality of a game from 20 years ago and it looks absolutely awesome. This is sure to be a rather subjective style and there will undoubtedly be people who find it unsightly but the visual style appears to be consistent and intentional as opposed to being the best the developers could do….I would assume.

Postal: Brain Damaged does not offer a gripping story that is going to leave you on the edge of your seat. It plays more like something from South Park. Filled with toilet humour, rude jokes and a lot of mature content. Whipping out your penis and pissing over enemies or innocent civilians is something that you can do whenever you like.

The weapons in this game are sort of what you might expect in any first-person shooter. Assault rifles, shotgun, rocket launcher, cat launcher….

Ammo capacity is a bit of a pain at times. Even for the game’s equivalent of the run-of-the-mill carbine-style rifle, you will find that you are stuck for ammo quite regularly. In some ways, this is good as it forces you to use all of the tools in your arsenal but it also takes some of the high-paced action fun away from bigger combat encounters as you spend more time looking behind things for ammo instead of blasting everything in the area into meaty chunks. 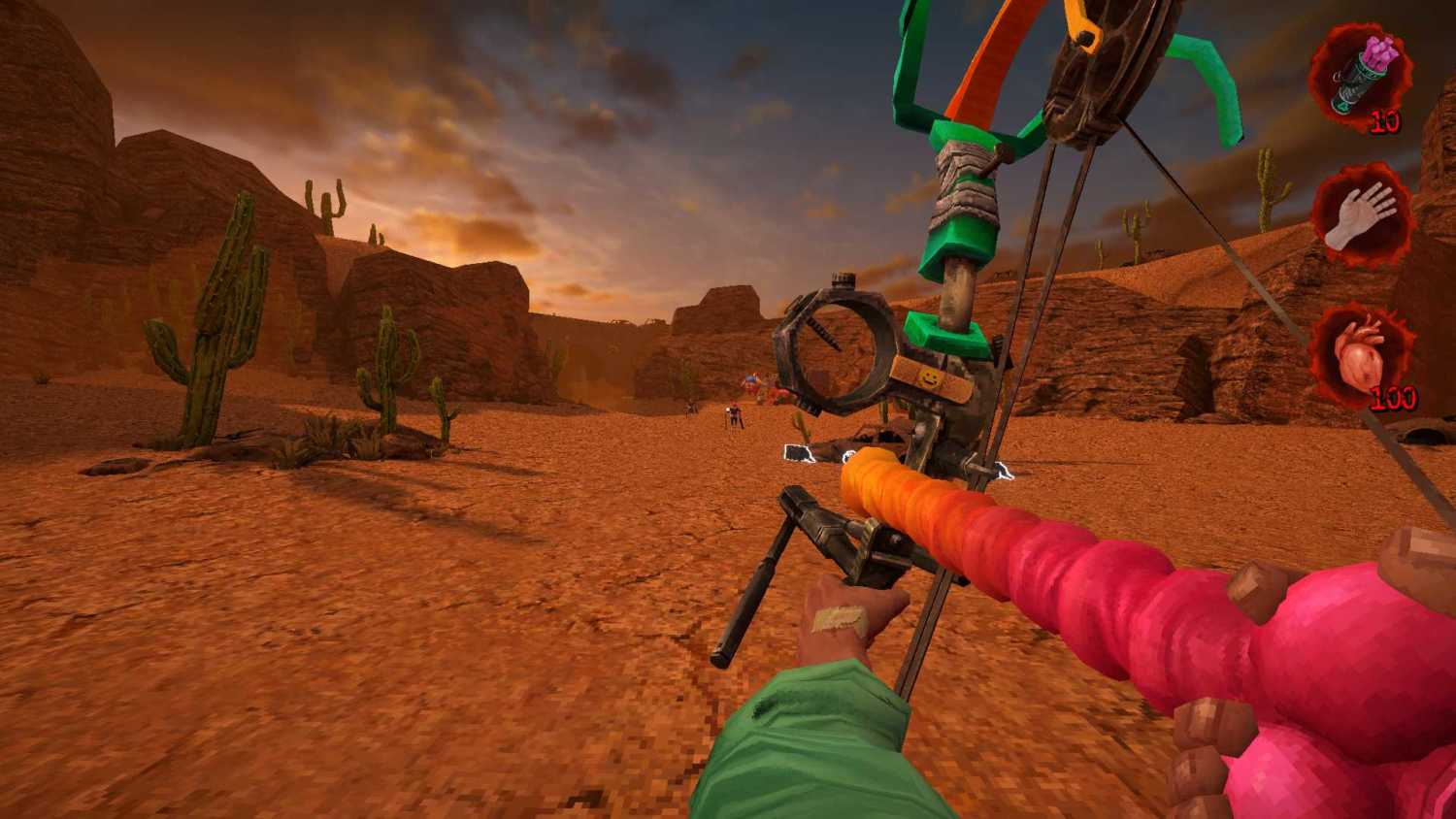 There are a few other mechanics to help you in combat. The melee attacks, which is sure to give you a few laughs as you see your feet, equipped with bunny slippers, unleashing killer kicks against unsuspecting, shotgun-wielding old men in zimmer frames.

If you time your melee attacks, you can shoot enemy projectiles back at them but the time window for this is far too precise and sometimes feels like it doesn’t work at all. You will find your foot often goes right through a bullet but it doesn’t bounce back. It is a really cool feature but due to its unreliability, is not something you will be using very often as you take damage more often than not due to the melee attack rarely connecting with the incoming projectile.

Postal Brain Damage contains little in terms of a story. It is more of a classic, get to the end and kill everything along the way kinda game. It works quite well and delivers those retro vibes in the process. The game is short enough and isn’t overly memorable in terms of levels. The first suburbia level is a lot of fun but quickly ends up in the dark sewers, followed by a series of other grimy levels that don’t really fit together in a way that gives the game a larger theme.

From start to finish, it is just a series of random levels with different enemies to kill. This alone is enough fun to make the game worth playing but it would have been nice if the more upbeat theme from the suburbs had been utilised more. We have enough dark and gloomy shooters, the humour in this game combined with a more positive theme would have been far more enjoyable.

7/10
Postal: Brain Damaged provides plenty of laughs with the wild selection of weapons and your ability to urinate on anything at a moment's notice. Jokes aside, while the combat is fast-paced and fun, like many retro shooters, the levels just feel a bit dull. While the initial suburbs level gives you a feeling that this may be something a little different, it quickly jumps back to the generic sewers and grimy old buildings that we saw far too many 2000s-era shooters rely on. Combined with a constant lack of ammo, you never really get to do the kind of blasting you would like.
Pros
Cons