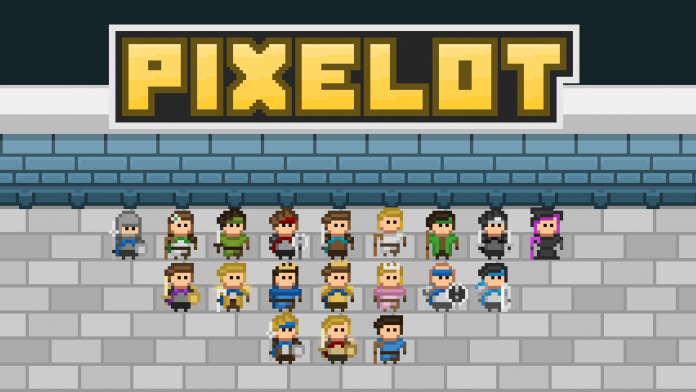 Pixelot is a classic RPG for desktop, android, and iOS, that combines the best parts of classic role-playing games. In Pixelot you create a custom hero and gather allies to defend against the darkness that has swept over the land of Pixelot. The game features numerous recruitable characters, playable classes, items, monsters, and dungeons alike. Promising an engaging story line, humorous dialogue, and a classic yet simple design, Pixelot is a game that is easy to pick up and hard to put down.

Recruiting allies is a major goal in Pixelot. As you complete the story, side quests, or just explore the world, you will gain opportunities to add new characters to your army. While you can only have 4 heroes fighting at one time, the amount of combinations between characters increases exponentially as you gain new allies. Each new character has their own class, their own items, and their own personality. Finding the best combination of characters that fits your own play style is very exciting and rewarding.

One of the best features in Pixelot is its class system. When you start Pixelot, you are given the choice between 5 very different starting classes. Some grant you the ability to heal yourself, others allow you to power yourself up or weaken enemies before dealing damage. As you level up, you will gain new abilities to use in combat. Each class has its own play style, combos, strategy associated with combat. As you progress through the story and collect crystals, your characters will also gain special passive abilities. These could be anything from simply boosting stats, to allowing the character to start out invisible for a few turns. These effects add a lot of uniqueness to each class that is not present in most other games.

Like any standard RPG, there are a plethora of items to collect in Pixelot. Each character is able to equip helms and armor to upgrade their defense and resistance, a weapon to upgrade their power, a cloak to boost the rest of their stats, and relics which add unique effects. Items have increased stats based on their rarity. Standard items will have no color to them and will not add any bonus stats other than the basics for their armor slot. As you progress into green, blue and even red items, they will have additional stats such as a helmet also granting you bonus health, or a weapon also granting you agility. Relics are unique items that give important bonuses to your character. These could be anything from increasing your critical strike chance, to allowing yourself to automatically revive once per fight. Relics add a lot of customization to your characters and your playstyle.

The primary goal in Pixelot is defeat monsters, complete dungeons, and collect powerful elemental crystals. Currently the game features the ability to collect 2 of these crystals and will continue to be updated to allow all 6. There are currently 3 major dungeons to complete within the regular story. This does not include several mini dungeons along the way, and many optional quests and areas to explore. Once you have completed the game, you are able to enter the Dark Tower, which is an infinite dungeon with increasing difficulty at every floor. If you are playing on android or iOS, this dungeon has a leaderboard so that you can check out high you have climbed in relation to other players.