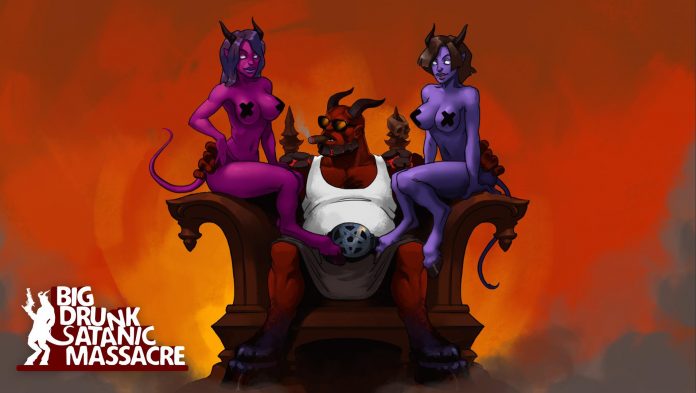 I spotted a game called Big Drunk Satanic Massacre a few weeks back and it looked pretty crazy. The name was enough to give the impression that this was going to be more about blowing shit up and less about trying to tell the story of some lad who needs to save his family or something. Just gimme some guns, I came here to kill stuff!

The videos I have seen so far look like it is going to tick all the boxes for intense and explosive action. Sort of like a top down version of classic Doom. Top down shooters are a lot of fun when there are some decent production values and this game looks like it will be pretty good. Having just got off the back of Link’s Awakening, I need something a bit more aggressive to get me back to normal.

You know how gamedev parties are… they’re literally a neverending chain of boobs, barbecue, more boobs and… good old milk, of course!

Meanwhile, we’ll try and keep you in the loop – make sure you follow us in social networks, gear up for the release at the end of September! pic.twitter.com/KhI01UJBMP

Needless to day, the devs had an event with boobs, asses and meat…not the kind of meat you are thinking of, animal meat…that you can eat on the BBQ. Not sure the reason behind it all, but It seems like a party that you would want to have been at.

Video game titties are never much to get excited over, but the fact that this was promo material for the game, gives you an idea of where the devs are at. This doesn’t look like it is going to be a game with a deep meaningful story. This is gonna be about blowing demons up and maybe drinking beer? Who knows, all I know is this is on my list!