Nerdburglars Gaming
Stream Status: Loading...
Home Game Guides The Legend of Zelda: The Wind Waker How To Get The Swift Sail 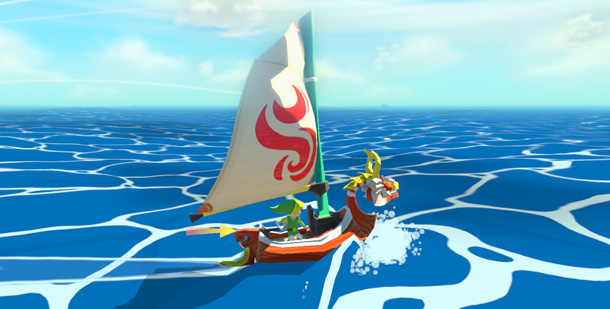 The Swift Sail is an upgraded version of the standard sail with some very special and awesome features. The first, and most obvious feature is that this sail makes you sail faster than the other sail. The speed boost is very useful when having to make particularly long journeys and the second thing it does is alter the wind so that it is always behind you no matter what way you are facing. This means no more playing the wind song. Here is how to get the swift sail.

To get the swift sail you need to have around 300 rupees in your wallet and you need to head to Windfall island at night time. During the night there is an auction that takes place on the bottom floor of the fancy house with the red door. If you are running from the bomb shop and up to the village the auction house is the first house after the ChuChu jelly shop. It is the only shop with a red door.

Once inside talk to the man wearing the snow jacket and agree to take part in the auction. This is where you need to have luck in 2 degrees. First is that the swift sail only appears in the auction randomly and when it does appear you need to win it. Winning it is quite easy, but some people have reported difficulty in ever seeing the sail show up in the auction. If the sail does not show up, you will need to exit the auction and come back in again. When you come back into the building a new item will be up for auction. Keep doing this until the sail appears.

How to win the auction

Winning the auction is a little tricky as the bids can come in very quick toward the end. The trick to getting this done is to bid high to stun the other bidders. You can stun the others by bidding 10% of the current bid. So if the bidding is currently 150 rupees, you will need to bet 15 rupees in order to stun the others. While stunned you can mash A in order to be able to place another bid. Keep the enemies stunned as much as possible in order to ensure that you get the highest bid and it will also keep the total cost down. If you wait until the end to stun them, the others will jack up the price of the auction far too much and you will end up paying over 300 for it. If you play it right you should get it for under 200. Bring extra rupees to be safe though as you do not want to lose the bidding if you are lucky enough to actually have it appear.

If you are the highest bidder after 1 minute the swift sail will now be yours!

Here is a video that will show you exactly how to get the Swift Sail in the Wind Waker.