Nerdburglars Gaming
Home Game Guides The Legend of Zelda: The Wind Waker How To Kill The Forsaken Fortress Boss 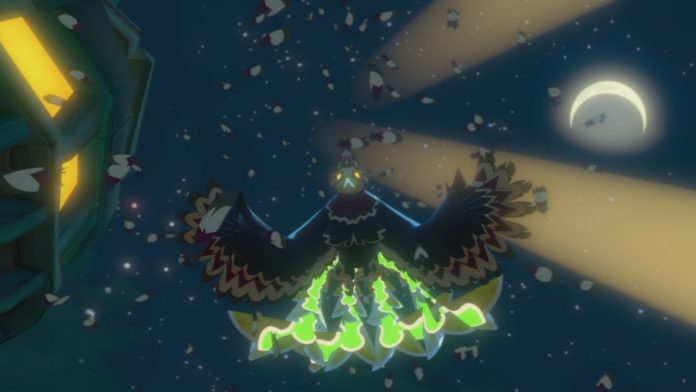 After making your way through the Forsaken Fortress for a second time you will now be on top of the fortress, about to take on the large bird that originally stole your sister. This is the easiest boss fight so far in the game and you can easily beat this boss without losing a single heart. Here is how to kill the Forsaken Fortress boss.

The first stage of this boss will involve having to run to the top of the tower that is currently filling up with water. As you are running up the bird will be breaking the platforms that you walk on top of trying to knock you off. This requires you to be quick with your movements. If you perform a lot of rolls you will easily get to the other side of the wood platform before the bird destroys it. Now and then, enemies will jump out of pots, just ignore these guys as there is no advantage to killing them.

The bird has a few moves that he will use to try and hit you. All of these are very easy to dodge.  Your main goal here is to wait until the bird is about to attack with its beak. If you can roll out of the way on time his beak will get stuck into the floor, which will give you time to run over and hit him on the head with the hammer. You need to do this quite a few times before the mask breaks off. Every now and then he will jump up and fly around. He will come in like a bomber and attempt to hit you with his foot. To combat this, you stand still with a wall behind you and wait for the bird to swoop down. When he is about to hit you, roll out of the way and the bird will fly face first into the wall. Eventually, if you do this enough he will come back to the ground and attack you as normal again.

Once you have landed enough hits in the face with the hammer the bird’s mask will fall off revealing his weak spot, which is the jiggly thing on his head. If you have arrows you can easily kill him by aiming at the face and firing a bunch of arrows that will quickly kill him. If you do not have any arrows you will have to wait until he attacks and you can use the same strategy as before to wail into his weak spot. Once you have landed enough hits the boss will die and you can make your way up to Gannon’s room.