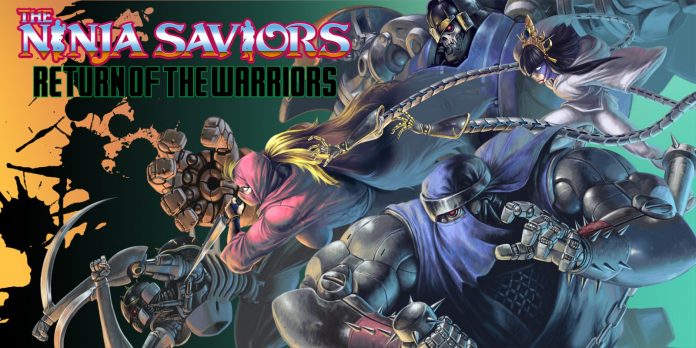 The Ninja Saviors is a remake of a 90s beat em up from the SNES called Ninja Warriors. We can only assume a trademark conflict with the TV series was the reason behind the game getting renamed. You might think that 8bit and 16 bit games don’t really need a remaster when the visual style remains unchanged but you would be surprised the difference resolution makes on these classic games.

The first thing to address is the visuals, mainly because it is the main improvement this game has over the original. We always remember games from the 90s looking super realistic, so you might not see the improvement right away, but you can be assured that this game looks really good. At least as good as a 16bit game can..or at least as good as your brain tells you it looked back in the day.

From the main menu, you have a character select menu before starting. There are five characters in total with two of those locked until you beat the game on normal and hard difficulty. There are some differences between the characters, but nothing significant enough for you to notice right away. You need to spend some time learning the characters moves before you can figure out which is best.

The combat feels quite dated when you put it up against modern games. Chaining combos isn’t possible, there’s very little to chain together really. The moves are once off things rather than these complex events that you string together to kick the crap out of enemies before they know what hit them.

In most scenarios you will find yourself sticking with the standard button mashing attack, a jump kick and a low punch. This covers all scenarios and will get you through most bosses and enemies.

Below your health, you will see a power meter. It will slowly increase as you are moving around. Killing enemies fills it faster and taking damage will reduce it. This is going to be the game changer when you are having a hard time. You can perform certain moves that will be super powered and consume some of this power meter. Or you can just unleash the entire thing in one large explosion. When you are getting overwhelmed or a boss refuses to let his guard down for you to attack, power moves will save the day.

There are eight levels in total, each one ending with a boss encounter. These fights can be a lot of fun. Mainly because you are stuck killing the same enemies over and over for the duration of the level that precedes. It is great to have a new enemy to break it up.

If you were a fan of the original or are a fan of classic 16 bit beat em up games, you will find a lot to enjoy here. For those into more modern forms of the genre, there has been very little added to modernize this game. Make sure you know what you are getting into before you purchase.

7/10
The Ninja Saviors is a faithful remake of the original Ninja Warriors game. Some may regard this as a good thing but for those looking for something new and improved, you will find this game very dated.
Pros
Cons