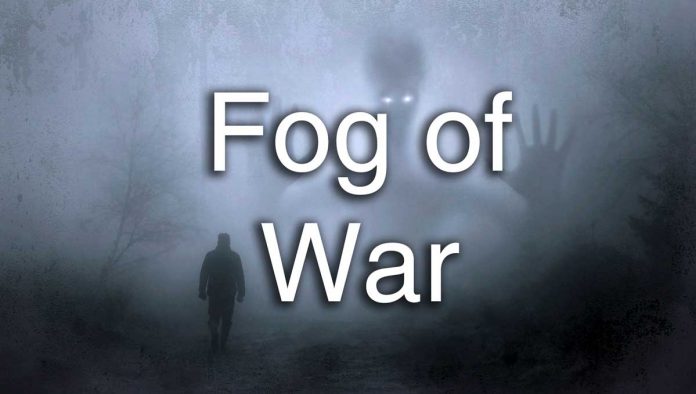 The term Fog of War is something that is used in the context of military but it is also a gaming term and has a more specific meaning in video games. In recent years, it is something that is not used as much. Mainly due to the fact that the main genres that this applies do have sort of died off.

RTS games are typically where you would hear the term Fog of War in a video game. It simply refers to areas of the games map that you have not yet discovered or explored. See the image below for an example of this.

Sometimes, in much older games with poor draw distance, when you try to look across the map, you will see a white haze/fog. As you walk into it, you will begin to see new things in the distance. This is sometimes referred to as fog of war but this would not be the correct use of the term. This in game fog is typically present when the game engine is unable to render objects that are far away in the distance. This is not something we see as often now that games have become far more technically proficient.

What is the point of using fog of war?

Depending on the scenario, the reason can differ. In RTS games, a critical part of the game is the fact that you do not know where the enemy is. You must go out and find them yourself. Exploring the map with a scout is part of the genre and without it, the game would be far too easy. You need to get out there and find out what you are up against.

For older games, it was simply a performance thing. I have spoken about frames per second before and how the amount of on screen assets will influence the number of frames generated. If assets in the distance are not rendered but instead are hidden by a fog, the GPU will not need to render them and as a result, can render a frame much faster. This is rarely an issue for modern games though.