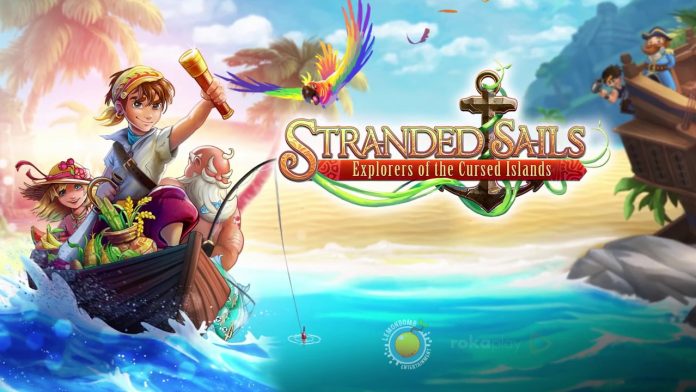 The idea of waking up on a deserted island and having to get by with whatever you can find is a concept that works well in games. It is one of the more enjoyable types of Minecraft seeds. Stranded sails, does just this. Your ship gets damaged in a storm and you wake up on an island. You must find survivors, build houses and farm the land in order to survive.

Survival Island is a format that tends to go right for most games. You slowly start building new structures and unlocking new resources that make your life easier. The struggle to survive is there at the start but once you build a solid base camp, the exploration can begin. From the marketing material, it definitely looked like stranded sails was going to be that kind of game, unfortunately it is not.

Stranded sails revolves around one incredibly stupid stamina mechanic. You have a tiny stamina bar and when it runs out, you pass out and are teleported back to your bed. This makes exploration, the core of what this game appeared to be about, a massive pain. Everything you do burns through your stamina meter. Sprinting, which isn’t even that fast, absolutely decimates it!

Food can be used to restore your stamina, but it does a pretty bad job at it. I’m not sure what kind of metabolism this kid has, but you can eat everything in your inventory and it might give you back a quarter of your stamina. You will burn through this after about 30 seconds of running.

As you progress, you will unlock cooking recipes for food that restores more stamina. You will unlock upgrades to your inventory that allow you to carry more stuff, but nothing makes that stamina meter go away.

The objectives for this game start out fairly standard. Setup a farm, build a shack, explore this area for items. You will quickly notice a trend that takes the most annoying aspect of the game. Every new quest just feels like a cream pie being smashed into your face because you will soon find this game is a joke.

“Hey take this boat and go search for a missing person”. You go looking, hoping your stamina doesn’t run out and you end up having to start all over. You find the person, bring him back and what’s next? “I left something back where you found me, can you go get it”. You have to fight the stamina bar, to go back to the exact same location to fetch an item from a chest. A chest which you will likely find the first time you are there but discover it is locked.

The quests are severely lacking imagination. The entire experience is just a game of desert island hide and seek. You need to find all of the people who were on the boat. All of which seem completely incapable of helping themselves.

The camp has a fire and some guy is lost 5 minutes away. Why can’t he make his way back to the camp? The answer is the game would be pointless without it. There shouldn’t be a game if this is the kind of argument.

Since the stamina bar likes to crap all over your fun, food is a fundamental part of the adventure. From the very start, characters in the game keep reminding you to bring food in case your stamina runs low. There is no “in case” though. You will be out of the camp 2 minutes and you will be needing to head back for a snooze to rest your tired legs. Despite the stamina problems, farming and food aspects aren’t that bad.

Farming is fairly limited, but it is one of the more enjoyable parts of the game, which isn’t saying much. Using a shovel, which devours stamina, you can prepare some land for seeds to be planted. Seeds will often pop out of crops when you harvest them but you will also find plenty of new seed types as you explore. If you keep the plants watered, they will be ready to harvest fairly quickly.

The cooking side of things was also quite fun. When you know a recipe, cooking is a matter of adding the ingredients and you have the cooked meal. There is also a mini game where you can discover new recipes by combining ingredients together until you get it right. This can get a bit frustrating after a while as the system doesn’t do a good job at explaining how it works, but it is an interesting idea.

The UI for this game is an absolute disaster. Rather than opening your inventory and being presented with a grid of items, you get a series of three wheels. Items are grouped up on these wheels and accessing them quickly is a chore. The buttons to navigate between the wheels and select items are just too fiddly.

You will constantly find that you switch over to the next wheel by accident when you are trying to quickly access something. It just feels like something from a mobile game or a very old console game. It’s cool in theory but it’s easier to just have a standard grid.

The biggest let down from this game was the exploration. It feels as though the game actively discourages it. You can only explore places the game tells you to. Your hand is held the entire time. There is no sense of excitement that you might stumble upon something ancient treasure. You “stumble” across things that the game wants you to and even at that, its fairly uninteresting.

The game is geared toward a younger audience who would be less critical of the shortcomings and may prefer the simplicity of the survival and exploration mechanics. The stamina bar however, is something that will be a problem for everyone. It would have been enough to kill this game, even if everything else was perfect.

4/10
Combining a farming game with an open world exploration game seems like a great idea. Unfortunately stranded sails fails to provide much fun with farming or exploration. There is way too much hand holding combined with boring progression and a disastrous stamina system. Stranded Sails is a game of fetch quests with no reward or enjoyment to be had in between. Exploring a desert island seems like fun, but the game doesn’t want you to have too much of that.
Pros
Cons