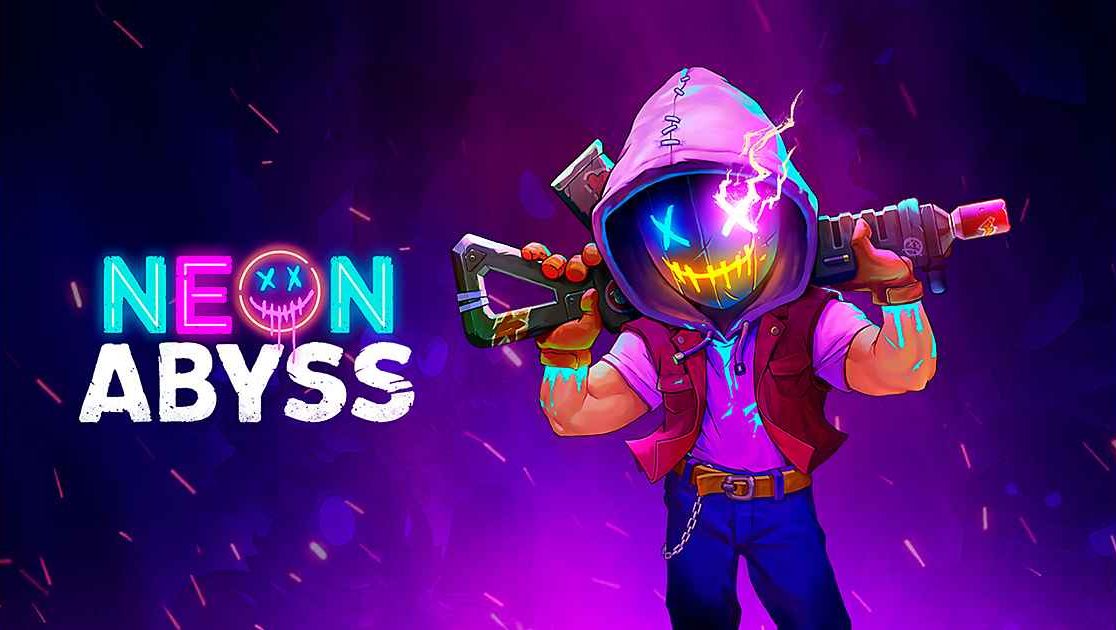 It is never a good thing to judge games on how they look but the alluring lights of the Neon Abyss are eye-catching, to say the least. The attractive pixel art design is loaded with flashy colors but when you get into the meat of it, is there a game worth playing? Yes, yes there is!

Neon Abyss is a roguelite dungeon shooter. This means you play through random, procedurally generated levels and when you die, it is game over. The genre has become quite popular over the years and is a serious hit and miss genre. Neon Abyss most definitely falls into the hit category.

In terms of the gunplay, Neon Abyss is nothing new. A 2D side-scrolling platformer where you must aim the gun to kill enemies in each room. Make your way through all of the rooms to get to a boss fight. Once the boss is finished, move onto the next randomly generated set of rooms.

How Neon Abyss makes things unique is with a massive catalogue of ridiculous power-ups. The actual power-ups themselves can be standard enough. Jump higher, shoot faster, block random enemy attacks etc. What makes them wacky is they all modify your character when picked up. After collecting a few, you can be running around with a popcorn box on your head and have a Captain America shield in your hands for good measure.

Not all of the power-ups help you. Some feel like a bit of a poison chalice. It will take a few mistakes to learn the good from the bad. Pausing the game will reveal the plethora of ridiculous powerups you currently have. It serves as a great way to see what is currently making you so strong or holding you back.

The best thing about the power-ups is they all stack. You will never negate another power-up by picking up something new. This stacking can result in you becoming seriously powerful. Regardless of how powerful you become, the boss battles are sure to slap you down to earth before you start to feel unstoppable.

Pets are another item that adds layers to the already wacky style your character embraces so gracefully. As you explore the dungeons, you will come across eggs. Kill enough enemies and the egg will hatch. Sometimes you get a new creature to follow you around as a pet and sometimes they are duds.

The pets are completely random and offer a different set of benefits. Some of them block enemy attacks, others will attack enemies for you. There does not appear to be a limit either. If you get a few lucky rolls, you could end up with a large trail of little pets running behind you, kicking the crap out of anything that comes your way.

The procedurally generated rooms are well designed, but there are a lot of them that feel a little too small. Rooms may only have three or four enemies. When you need to get the hang of a new weapon, you will likely have to die in the boss fight figuring it out as there are never enough enemies in the main rooms to practice on.

The low number of enemies aren’t the only problem that the small rooms bring. The cramped areas often cause enemies that can teleport, to teleport right on top of you. These are impossible to dodge as you take damage as soon as they appear.

If you have been lucky enough to get a few powerful pets and some good weapon upgrades, you might find that the number of projectiles on screen at once end up obscuring your view in the more cramped rooms. It is a little frustrating to finally get a good run where you have a chance to get to the final boss only to take damage due to not being able to see where the hell you are on the screen.

The game is split up into stages. Each stage is broken up into levels with each level having a minor boss and the final level of the stage having a major, more powerful boss. If you die on the 7th level, you must go all the way back to the start of the stage. Pretty typical for roguelike games. The good news is that each boss killed gives you a crystal. You can use these to unlock various new skills and powerups to help make future dives into the abyss a little easier.

The visual style of this game is incredibly attractive. Pixelart is popular these days because it can be easy to do at a basic level. Neon Abyss brings a high level of quality that isn’t too common with this art style. Attractive lighting with lots of wild particle effects. Even the appearance of the large looming roman style statues, decorated with neon lights give off a feeling that you are entering more than just a random dungeon.

Your eyes are not the only thing that will get enjoyment out of this game. There is also something in there for your ears to appreciate. Hard-hitting, heavy bass beats will have you bopping your head as you blow your way through the abyss. The experience feels quite unique and special. The though of a rave above your head as you are down in the pit makes the experience feel like a game within a game.

8/10
Neon Abyss is a great example of a rogue-lite game that is done right. The visuals and soundtrack make exploration a lot of fun. The gun mechanics and crazy powerups make it a lot of fun to kill everything in sight. The game just falls a little short when it comes to random rooms. They are often very small and cluttered. It is easy to lose where your character is on the screen until you either die or everything else in the room is dead.
Pros
Cons