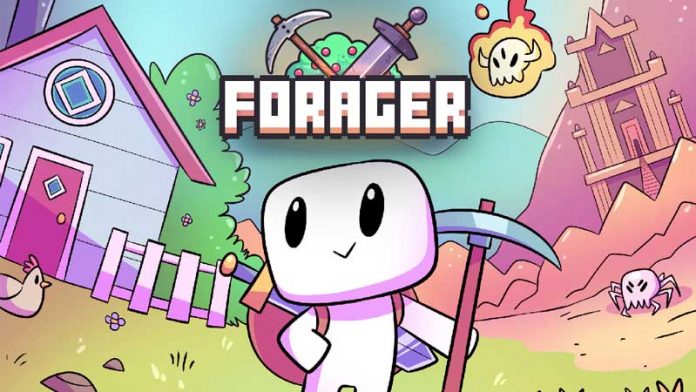 Sometimes it feels like everyone is trying to jump onto the Minecraft bandwagon. Endless streams of games based on an 8-bit sandbox world. It can always be hard to pick the good from the bad. Forager certenately has some elements inspired by Minecraft, but it has gone a long way to make itself feel different. Forager is most definitely a diamond in the rough.

Forager throws you right into the thick of it as soon as you start. There is no long intro, no cut scenes and no training levels. You have a pickaxe and nothing else. You must use common sense to try and survive off the land. This is pretty much the foundation of Minecraft. The similarities begin to fade away from here as the games take separate roads.

Forager takes elements from several genres to build something that feels quite unique and fun. You have a top down view point that makes the game feel a lot like a Pokemon game. Instead of Pokemon, you have slimes that do nothing but try to wreck your day. At times it also feels a bit like a classic Zelda adventure.

The objective is to harvest trees, stone, plants and pretty much any natural resource you can get your hands on. Using these resources you can construct buildings and craft various items that will benefit the player in some way or other.

For example, iron ore is of no use to you. Build a furnace and you can melt this down into iron bars. Using a forge you can use the iron bars to craft swords, axes, armor and other useful items. It won’t take long before you see how integral the crafting is in this game. Everything you do involves crafting in some way or other.

Resources appear randomly throughout the map. This isn’t random in the way that Minecraft does it though. One moment, you will be looking at an empty field. Next moment there will be rocks, gold veins and some random plants that just appear out of thin air. It is kinda weird and you would think that it makes the game super easy, but it is an incredibly well built system that will allow you to get what you need without excessive amounts of grinding.

The game starts out with a single section of land. The rest of the world is hidden by a sort of fog of war for which you cannot enter. In order to unlock new sections of land, you must use coins. The sections of land start out cheap and get more expensive as you work outward. The cool part about this is the fact that the land is split into biomes. The area to the left of you could be full of gravestones and look like something from a Scooby Doo mystery. To the right you could have a warm desert. Each of the biomes comes with some unique plants and resources that can only be found in this region.

As you unlock new areas of the map, you will begin to discover that some sections of land contain structures. Some of these could be complex puzzle rooms and others are dungeons. There are four dungeons in total and they are the most enjoyable part of this game by a long shot. Unfortunately, there are far too few of these and they can be beaten in a matter of minutes.

Combat plays a disappointingly minor role in this game. There are slimes which spawn randomly and the odd time you might get this large buffalo to kill. If you head into the dungeons or graveyards, you will come across skeletons and demons. Each of the four dungeons will contain a final boss but they are usually very easy to defeat. Particularly when you see how overpowered you can get if you spend a lot of time hunting for resources to craft the most powerful items in the game.

Considering the game has various armor pieces, weapons and skills relating to combat, there is hardly any “combat” in the game. Slashing a few slimes isn’t what I would consider combat. All of the enemies in the game can be killed using brute force. No tactics required, just bash the shit out of them with your sword. It’s impossible to die.

Having spent 11 hours on a single world, I ended up hitting a plateau. There were still some swords to craft and things to build, but there was nothing to work toward anymore. It feels like the entire game is building up to something that never comes. There are no enemies strong enough in the game that require you to have the high end gear. The four dungeons are explored so soon that there’s no sense of adventure left. 11 hours is a decent amount of time, but it was time spent building toward the mystery of what lay ahead. Once you get to the top, you realise that there wasn’t much worth climbing up for.

There are a few NPCs around the map that will ask you to bring them rare objects. A dinosaur egg, a golden egg and other weird items. Before I had exposed the entire map, there was excitement to think, “oh man I can’t wait to find out where the dinosaurs are”. Turns out that all of these things are just random drops you get from digging in the ground. A highly boring grind. There is no exciting place that contains these mysterious items. They are just ancient artifacts you dig out of the ground.

Games like Minecraft are fun because of the resource gathering and crafting, but there is no upper limit on the creativity. You can build anything you set your mind to. There is an endless sense of adventure and exploration. Take away these limits and you will soon run out of stuff to do. There is no settlement you can build. Nowhere to properly plant your roots. You will more than likely pick somewhere that you build all your crafting buildings and maybe plant some crops, but it’s not something you could call the home base.

Forager has a fantastic core concept but there isn’t much for you to do as you work your way up the economic ladder. Better swords exist for killing enemies that never come. Better harvesting tools exist for mining that you never need to do. Armor and gear gives you perks that make survival easier, but what are you surviving for? Once the sense of adventure has gone and you have explored the map, there isn’t anything left to do with the fully exposed world.

The replay value of Forager is quite limited in its current state. From the main menu, there is a list of future planned expansions. Things that will bring combat, farming etc. These may turn this game into a real Minecraft killer. As for right now, you will get 10 hours or so out of this game before you have seen all it has to offer and will have no desire to replay it again. You can’t really complain for the price tag. Forager is a good game worth playing, it just feels like it is missing something.

7/10
Forager starts out incredibly strong. A huge map that is currently hidden. You get a Zelda like feeling that there is a huge adventure ahead. What initially appears to be an exciting game with lots of mysteries to uncover, actually turns out to be an endless loot grind with very little to stimulate your creative needs and sense of adventure. Forager was 5 hours of fun and 5 hours of a steady decline into “is this what I have been working toward?”. The low price tag makes this game well worth the money. It is just a shame there isn't more meat to sink your teeth into.
Pros
Cons