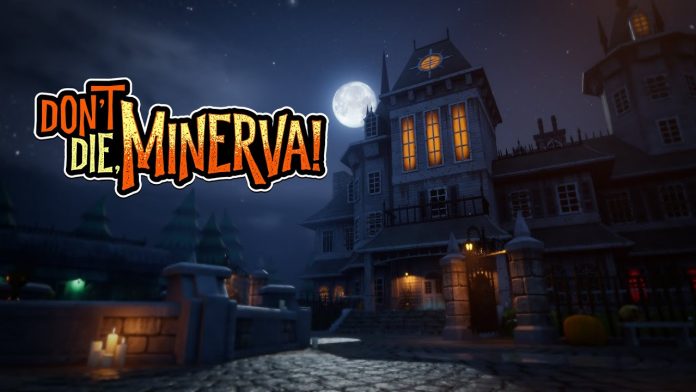 There is something alluring about that Tim Burton style of quirky horror. It’s not quite horror in the conventional sense. The sinister aspects of the genre are morphed into something that possess huge amounts of character with an almost magical vibe to it. Video games that draw influence from this visual style are always games I can’t resist.

On an artistic level, Don’t Die Minerva feels like it draws influence from that whole Tim Burton, Scooby Doo, Adams Family style of scary. A spooky mansion, ghosts and ghouls roaming around inside, yet it will never actually scare you.

This game is currently unfinished but there is enough there to be able to share some first impressions I had while playing. I was fortunate enough not to encounter any game breaking bugs but the current progression system does need some tweaks.

In my recent dive into Sparklite, I found the repetitive nature of the progression very tedious. Grinding is not always a bad thing but when the activity is boring, it’s hard to find any fun in it. Don’t Die Minerva follows a very similar style. Randomly generated levels where you will do a lot of grinding, the only difference, and the part that matters most, is this is actually fun!

The game is split up into three areas, at least three that I discovered. You start out in the mansion. The goal is to enter the mansion, defeat a bunch of ghosts and monsters on each floor before facing a boss at the very top. If you die, you lose everything and must start again from scratch at the bottom floor.

I found this quite frustrating at first, but I later discovered that there was ways to share progression across your runs. As you explore, you find crystals, you can use these to purchase character upgrades. One unlocked, this is unlocked forever, even if you die. Unlocking the ability to sell extra items you find will help you gather lots of money, much faster than normal. This was the turning point. There was now a progression goal. If levels are too tough, you can gather more crystals until you are better able to handle the enemies.

Each floor is randomly generated. If you play the mansion 50 times, the layout will be different. This works really well and there were never any instances where the design glitched out. The place is a bit of a maze though, there are two methods to help you keep track of where you are and where you have been.

You have a small mini map that shows the room you are in and once you visit a new room it will be revealed on the map. The other method, which was really cool is by leaving footsteps. When you kill some types of enemies, they leave a load of colored goo on the ground. Walk into this and your footsteps will leave a trail. This spooky breadcrumb trail lets you instantly see where you have visited in the past.

On top of the more significant character skill and ability upgrades, you have an RPG style system for equipping items on your character. Boots, backpack, weapons etc. These items are lost when you die, but are also easily obtained. Loot drops are quite generous and all floors have a room that contains a large loot chest. Getting killed when you have some kick ass gear is a big loss. You will see your play style change significantly based on how much you value your current load out.

Each floor contains a wishing well that will transport you to an area where you can purchase upgrades and items. In the event you do die and lose everything, you can head back here to purchase some gear if the items you want aren’t dropping naturally. I would have liked to have seen more interesting items to purchase in this area. I didn’t spend coins on anything while I was here. It would have been cool if there were some seriously epic items here that gave you a reason to start hoarding coins.

The wishing well area is also your only place to spend crystals on the permanent character upgrades. This means you must reach a well before you die to spend them. If you die with 50 crystals, they are all gone. Spending them while you have them is critical to ensure you don’t end up with nothing.

Having cleared the boss in the mansion, I moved onto the garden and found a ridiculously sharp spike in difficulty. New enemy types were showing up. They behaved more aggressively and were able to deal a lot more damage. Perhaps I charged too quickly through the mansion, but it seems like the difficulty ramps up a bit too much. You will end up needing to go back and do the mansion a few times in order to upgrade your character enough to be able to comfortably take on the next area. The grind is a bit of fun, but if you are strong enough to kill the boss at the end of a level, you should be able to take on regular enemies in the next.

The combat is fairly basic. You have two attacks. The first is with a torch, which can be upgraded to other more advanced items that work in the same way. Shine the torch on the monsters to damage them. You also have access to a sort of sidekick. A monkey, bear or dragon.

Each sidekick has their own perks and attack style. You drop the sidekick down and they will survive for a set period of time before they expire. While active the money will throw bananas, meaning longer range but low damage. The dragon uses fire, medium damage and medium range and the bear will smash, high damage low range. There is a cool down that stops you spamming the sidekicks abilities too often.

The sidekicks are useful at times, particularly for slower moving enemies. For faster moving enemies that you need to run from, they do not help much as they are unable to follow you around.

Don’t Die Minerva is a pretty good game in its current form. It is definitely in need of some tweaks and fixes, hopefully all of these things will be resolved before the game is fully released. Will be looking forward to seeing what else is on the horizon for this title.