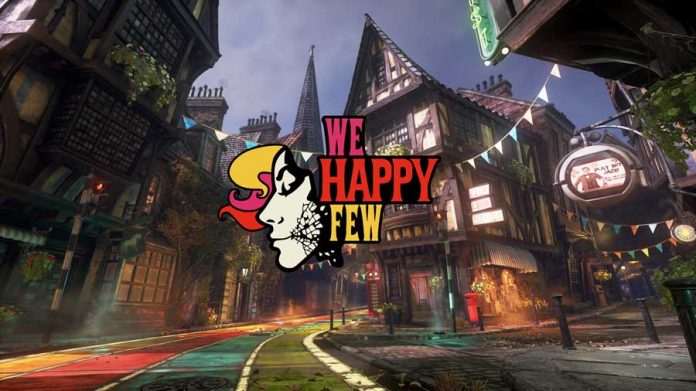 The 1960s might be remembered as a groovy time of peace and love. We Happy Few captures this era inside a totalitarian dystopia that feels like a blend between Bioshock and Dishonored. This game has managed to capture something really special. Incredible amounts of creativity have been poured into this to build one of the most unique and interesting video game worlds since we first set foot in Rapture.

We Happy Few is heavily influenced by the style of Victorian England with a strong dose of retro futurism. The architecture of the cobblestone streets feels familiar in some ways. What sets this world apart is the abundance of unfamiliar technology that was not available in that time period. Electronic scanners, hacking tools, advanced security systems and most importantly, the synthetic drug known as Joy.

Joy is what this entire world is based on. A pill that comes in a range of delicious flavors and once consumed, it will make the person blissfull. This sounds like a marvel of modern medicine, but the downside is severe memory loss. Who needs to remember the bad times when everything is so good right now, right?

In order to ensure the citizens stay in line and keep taking their pills, a heavy police presence is out patrolling the streets. Regular cops known as Bobbies are dressed like the traditional London Bobby and are the main enemy you will come across. They are tall, slender men with a permanent grin that feels very menacing. While they always greet you with a friendly hello, their height makes them very intimidating and their stare is very eerie. When you are suffering from Joy withdrawal, the Bobbies will spot it and pursue you.

As you progress through the game you will come across the doctors. These are a lot like the Bobbies except they can detect people who have not taken their Joy, even if they do not have a hangover. If they find someone who has not taken their Joy they will attempt to administer a high strength dose of Joy via a large syringe, whether the person is willing to accept it or not.

Without giving away too much, this game contains three unique stories. Your path will cross with other stories now and then but the overall story is different. It almost feels like a DLC story addon. While the stories were fun in their own ways, It would have been more enjoyable if it was just one larger experience. By the time you have a good talent tree and start to gather good resources and crafting materials, you need to go back and start all over again with a new character.

Each of the three characters in this game have their own unique traits. Arthur is well rounded, Sally is small and weak but has strong chemistry skills and Ollie is an ex-soldier so he fits the role of the classic brute. Each of the characters will have access to some unique skills and abilities that fit their personality, but they don’t quite make up for you having to lose your entire inventory and start a new game to experience.

It would have been better if the unique character elements could have been worked into one single character with a bigger skill tree and a single story that was longer. This game is not an RPG, but it has a lot of mechanics that would normally be in an RPG. You invest in your character and to have it reset so you can start the next part of the game hinders the enjoyment. You may not enjoy playing as Sally or Ollie half as much as Arthur because you will have no interest in investing in those characters when you know the progress gets reset when the next section comes.

We Happy Few was a Kickstarter project with a small budget and a small team. It is very hard to be critical about the lack of depth to the combat and stealth when you consider this. When you consider the circumstances, the development team did an incredible job with this game. It is just hard to ignore the fact that there is so much more potential for this game to be better than it already is.

Joy is never really a critical part of the story, but it is something you will be exposed to on several occasions. Those who do not take their Joy are known as Downers. Key areas of the city and towns contain machines known as Downer Detectors. If you walk through one of these when you have not taken any Joy, it will sound an alarm and you will become a wanted man.

Popping a Joy pill is something you can do at any time, but it is not something you want to do very often. There are times when you must pass through a Downer Detector and have no choice but to take it. The only benefit to taking Joy is that it makes the world super colorful. You will look forward to the times when you are faced with no other option than to pop a pill simply because the game looks incredibly happy when you do.

Coming down from a “Joy high” is a lot like a hangover from too much alcohol. You will not be rushing to take another one right away. You character will appear sick for a short period of time. During this time, citizens and Bobbies will become suspicious of you as they can see you are off your pills. The world goes from being full of color to being a dark and gloomy place filled with rot and filth. The contrast between the high and the hangover makes you see the full impact that Joy is having on society. The immediate come down shows you what Joy is suppressing.

Combat is something you will engage in now and then but it is quite limited. You can punch/block or swing a weapon and block, that is the extent of it. Initially it seems like the game is incredibly difficult as it is impossible to take on several enemies at once. Once you figure out that the goal is to use stealth, you will get over the limited controls you have to fight with. In a lot of cases, it is better to just let yourself get killed and start again rather than attempt to fight everyone trying to kill you.

Depending on your character, combat might want to be something you ignore completely. The second character is a small female and is not particularly good at fighting. She makes up for it in other ways but you will almost always want to go with the stealthy approach. The third is a large man and is good at fighting. You gain some additional skills to help this but it still feels like a very minimalistic combat system.

The stealth mechanics are also quite limited when you look at it for each character. You can take down unaware enemies, track people walking around and attempt to sneak past undetected. You also have several items like glass bottles that you can throw in order to cause a distraction. The mechanics are effective and work well, but it would have been nice if there was a little more to help spice things up a bit. Each character does have their own unique skills, but it would have been better if all of them could learn the same things to give you more variety during your playthrough.

The second playthrough your character has strong chemistry abilities but the story doesn’t promote the use of them. I beat the entire thing without crafting anything I didn’t need to. Mostly because I never had the right ingredients and didn’t see the point in spending an hour searching for something that was going to help me out.

The reasons that you need to travel from A to B are often quite trivial, like many RPG style games really. “Go to this person’s house and give them this, then come back to me” kinda thing. The experience you have while taking this journey is where the enjoyment really happens. The world is filled with color and weird events. You never know what might happen when you enter some house to collect a quest item. Taking the long way is always the best way because you are sure to find something interesting and end up getting sidetracked for an hour.

Crafting plays a significant role in your survival. Healing balms, repair kits, lock picks, hacking tools, outfits and weapons can all be crafted using ingredients you collect. You can loot almost any container you come across. The game is always very generous in supplying you with what you need. A locked door stopping your progression? There is a good chance the ingredients to make a lockpick are nearby if you look around.

Each of the unique characters will have some things that only they can craft. Some of them are really cool and you will certainly appreciate how enjoyable this crafting system is. If you have the items to craft something, the game will let you do it in a single click. For example, at a door and have bobby pins but no lock pick? The prompt will say “Craft a lock pick and pick lock”.

The main issue with it is that crafting doesn’t really do much to benefit you in game. Sure, it is cool to craft weapons and potions, but they rarely give you access to something you couldn’t just find. All of the advanced crafting recipes require ingredients that are hard to find. Since each of the playthroughs are short, you will need to spend a LOT of time hunting for rare materials that don’t provide you with much benefit and everything gets reset when the next playthrough starts.

As you complete quests, you unlock skill points. These can be spent to unlock new items on your characters skill tree. Some of these abilities are really useful and do a lot to improve the game. The best one being a skill that stops people getting angry with you for sprinting. You should have most of the tree unlocked by the time you finish each playthrough, so you will get to experience most of what the game has to offer for each character..

Dystopian worlds are often quite depressing in video games. We Happy Few is one of the very few that managed to create something dark and eerie without the feeling of despair. The world it builds is a dark, grim and oppressive place to live. Yet somehow it all seems ok. The effect that Joy has on the in game citizens resonates through every aspect of the game to give you a very similar feeling. Fortunately for us, the Joy will not cause us to forget this experience.

8/10
We Happy Few is a fantastic game but is not without its flaws. The combat and stealth leave you wanting that little bit more. Stealth, combat and crafting have a lot of potential but are implemented very minimalistically. The game manages to save itself through the delivery of an incredibly unique and almost magical world that will quickly make you forget about the shortcomings. From the spooky Bobbies to the drugged up citizens. We Happy Few paints a colorful picture of a dark world. When things are looking gloomy, you can always pop a Joy!
Pros
Cons