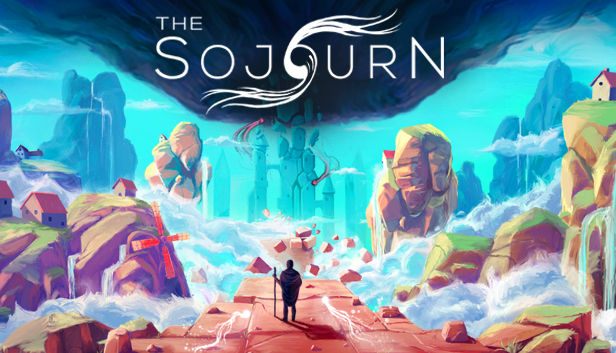 Making a mark on the 3D puzzle genre is a difficult task. With games like Witness and The Talos Principle, a game really needs to throw everything at the player to make an impactful experience. The Sojourn brings a large collection of increasingly difficult puzzle with some very attractive visuals, but how does it stack up against the competition.

The first thing that stands out about this game are the visuals. This game is incredibly pretty. The art style is very warm and calming. Just chilling in the scenery feels like a therapy session. You could find yourself looking out into the distance to admire the view. You start to wonder if people live out in that sandstone building.

The promotional material describes this game as “A tale of light, darkness, and the nature of reality”. You will find it hard to see what they are talking about. Now and then you will come across stone statues that are posed in such a way to display a scene but it’s not particularly compelling. It is most definitely not what anyone would consider a tale.

There are plenty of puzzle games out there that do not have a strong narrative. Most make up for it with strong puzzles and visual elements to captivate the player. It feels like the Sojourn falls short in these areas too.

The puzzles can be very tough at times. The difficulty level can vary so much between the levels. Some of them will leave you stumped and it is fun to solve them. You will get a great sense of reward when you finally beat something that had you completely stumped. As someone who has played a lot of games like this, It was impressive how often I had to stop and really think about how to solve the puzzles.

The difficulty level just seems so invariable. You can spend 5 minutes completely stuck on a puzzle. From here you can get through 5 levels before getting stuck again. It should be a case of easy working toward hard rather than things just suddenly getting insanely difficult out of nowhere.

Each puzzle will have teleportation totems. These can only be used in the dark world at first. You will need to use the dark power sparingly in order to make it across bridges and platforms That only exist in the dark world. Positioning the totems correctly is the tricky part.

As you progress, new items will show up. A harp that plays music for a short time. When these are playing music, bridges and platforms will solidify for a short amount of time, allowing you to cross over.

Efforts are made to shake things up but the puzzles get a little tiresome after a while. Games like Talos Principal keep you going by having a highly interesting story on top of incredibly clever puzzles. The witness may not have a traditional narrative but the puzzles are also interesting with lots of diverse surroundings. The Sojourn does not have these strengths.

Areas do change as you move on, but once you have done 5 or 6 puzzles in the same area, you will just feel like you are solving a new puzzle in the same place. It starts to feel like a chore to get through the remaining puzzles. There’s no story to progress with and there’s not enough diversity in the level design to make it feel like something new. The game gets stale far too quickly.

They tried to do something new with the puzzle mechanics. While it does add something interesting to the mix, it’s not enough to replace a story and diverse level design. The Sojourn makes a great first impression but fails to deliver anything new or interesting to make it stand out from the crowd. While it is not a bad game, it isn’t one you will remember either.