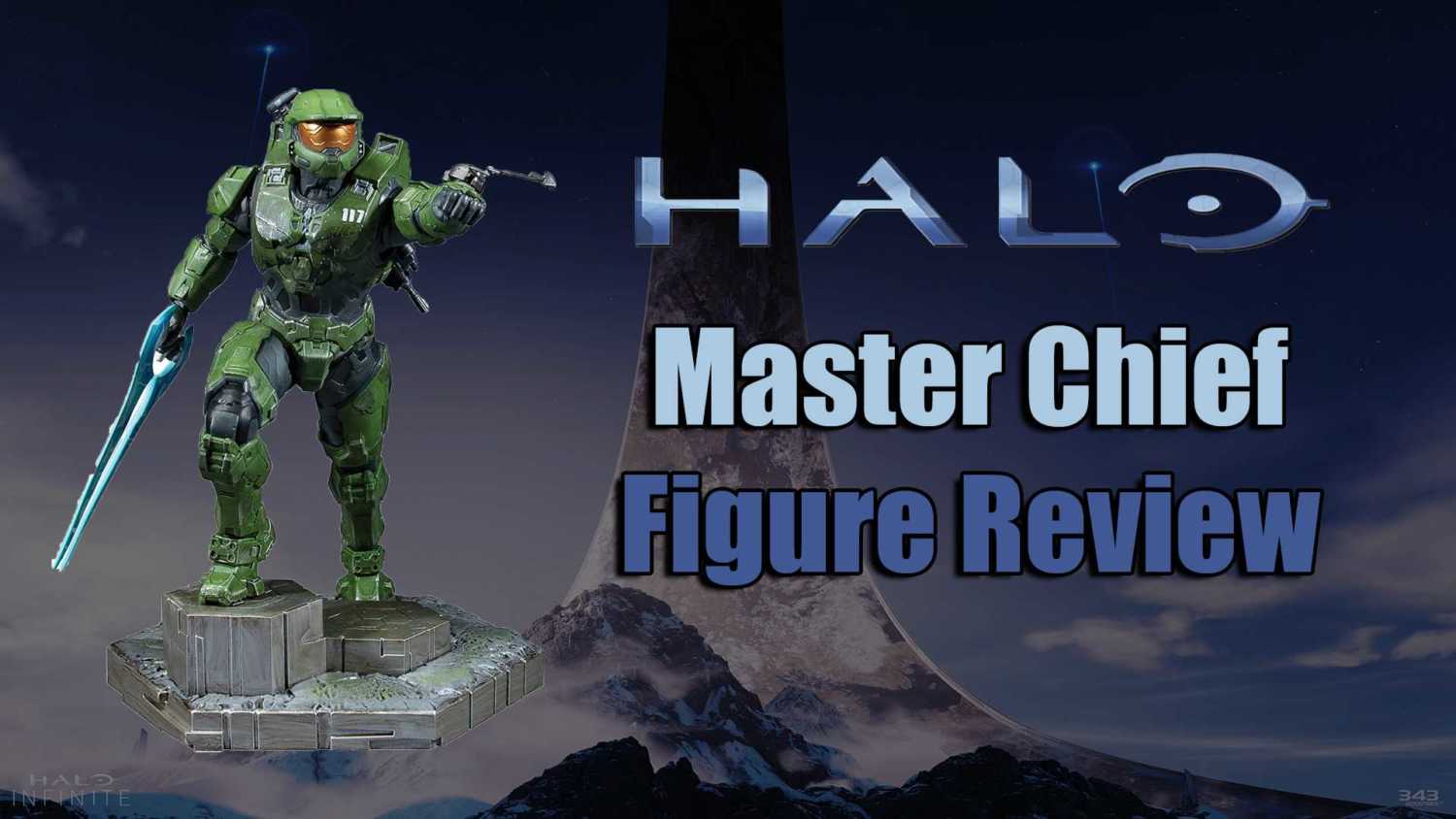 Master Chief has become an iconic video game character as a mascot for the Xbox brand. The signature green power armor with the orange visor is easily recognizable and associated with the Halo franchise.

First released in 2001, the latest game, Halo Infinite, marks 20 years of Halo and with that release, comes a pretty awesome figure of Master Chief with a power sword and grapple.

The figure shows Master Chief mid-shot of the grapple hook with the power sword in his other hand. The pose looks like it is taken from a rather tame part of the battlefield. The position of his feet and overall posture standing straight up would suggest he was walking rather slowly before raising the arm to shoot the grapple. It would have been a bit nicer if this were an action shot. Perhaps suggesting that he was running from attack and was making a run and leap to grapple to safety.

The arm with the grapple fits nicely onto the model. I was quite worried about unboxing it as I was fearful it may snap. It is a delicate piece but if I could take it out with my heavy-handed assembly skills, it must be made using decent plastic.

One of the nice details of the grapple is how Master Chiefs’ face is looking at the point at which the grapple appears to be aiming. This is what you would expect but it is a nice detail that was not forgotten about when designing it. 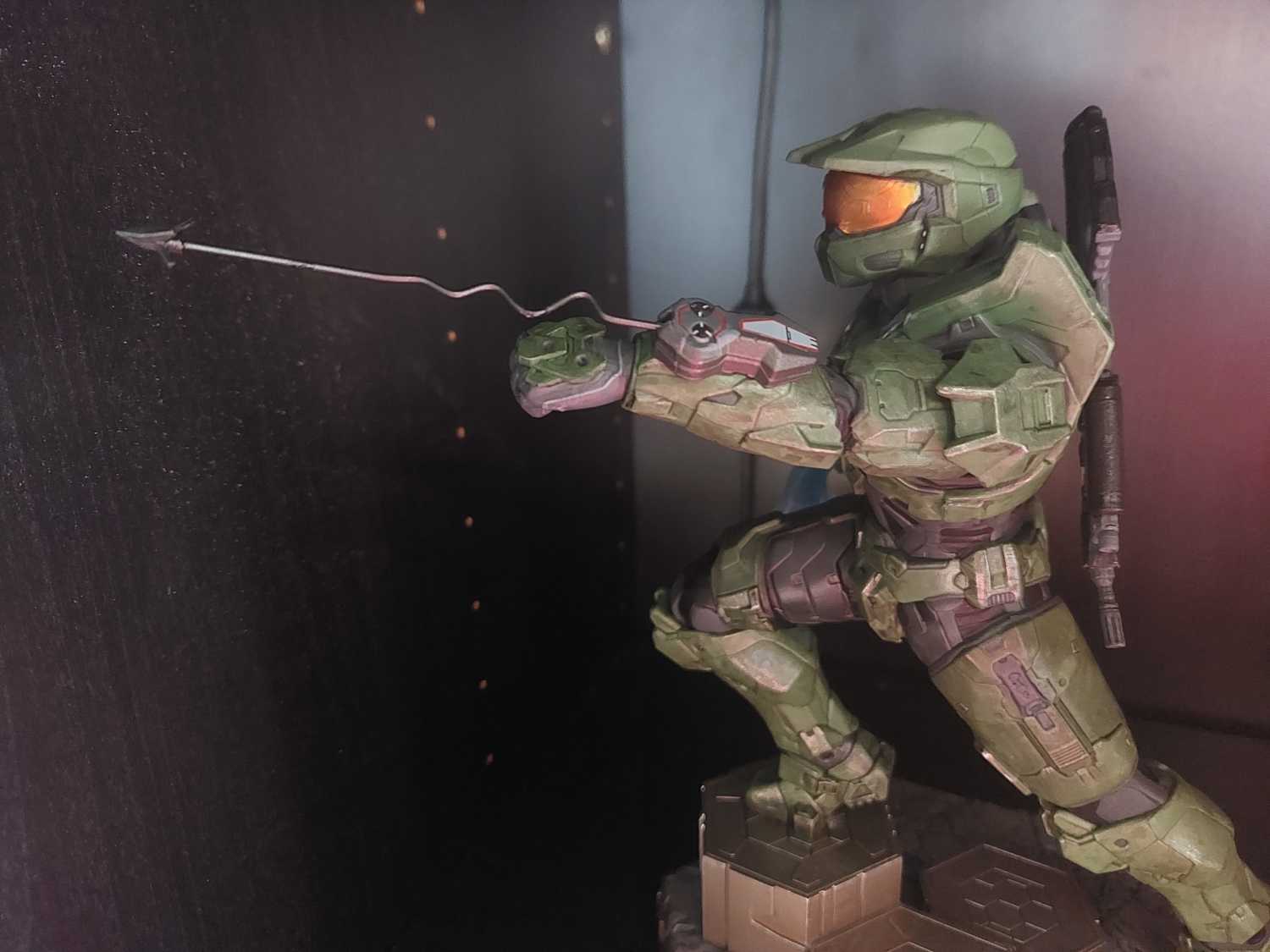 The head and visor look really nice. There is a layer of gloss over the visor to give it a really shiny finish, making it look like glass. The visor is not see-through but this goes back to the fact that the game has never let us see his face. The model will not solve this mystery for us.

The quality of the armor in general is quite good. Compared to the hexagon tiles he is stepping on, the armor feels a little muddy and lacks detail in some areas. All aspects of the armor are heavily rounded, often to the point where detail is lost due to elements appearing to be blended together. Many of the lines that make up the sections of the armor are lacking depth and definition. It wouldn’t stand out quite as much if the detail in the hexagon pillars were not so good. The contrast between the two is very noticeable and highlights the weaker quality of the molding for the armor.

The signature Halo assault rifle is attached to Master Chiefs’ back and this, even more than the armor, is subject to some poor molding. The depth of the detail is very low with lots of the finer details appearing very blurry. It is not something you will see often in you are facing the figure forward but it does highlight how some of the detail is incredibly poor. I have seen cheap items in the dollar store with quality comparable to this gun.

Moving onto the final weapon, the power sword, there is some redemption. The semi-transparent plastic with electrical effects painted onto it looks really nice. The plastic is ridged enough to maintain the shape while also having some flex to it to avoid any breakage.

The detail of the sword makes it something you do want to show on the shelf. Displaying this from the side is a really nice way to show this figure off. You see the grapple, sword, visor, and the pose while still hiding some of the ugly parts of the model. Shame it has to be this way but there definitely needs to be some better standards for quality.

7.5/10
This Master Chief model looks really cool from a distance but up close there are quite a few issues with the quality of the detail. Lots of muddy details and details lost due to poor molding. The pose, while acceptable, could have done with some tweaking to make it look like he was mid-run rather than walking. Not a bad figure overall but it can feel a bit cheap up close.
Pros
Cons