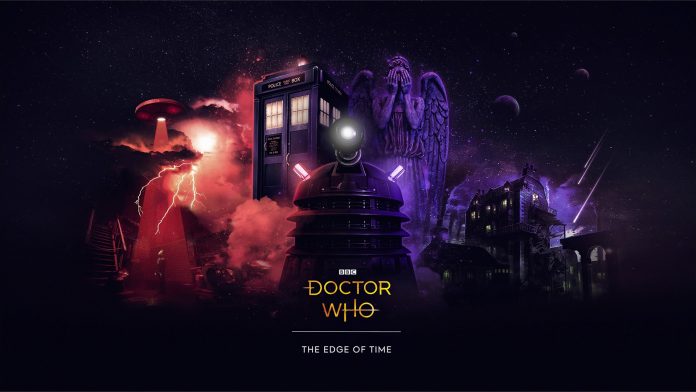 For a TV series that is as popular and long running as Doctor Who, it is hard to believe that there has never been a good video game adaptation. Doctor Who games do not have a great track record and VR games can be tricky to get right. The Edge of Time is up against the odds but somehow manages to pull through and deliver something special.

The game starts quite innocently. You are at the dry cleaners when the doctor appears on the TV screen asking you to help her out. If the gender pronoun wasn’t enough of a clue, this game features the thirteenth doctor. Jodie Whittaker is credited for the voice work in this game too. It certainly helps this feel a lot more like a proper Doctor Who experience.

The Doctor is always optimistic in the face of every threat, so you don’t get any feeling of imminent danger from your initial conversation. It doesn’t take long for you to find evidence to the contrary. Stepping out the back door of the dry cleaners to see multiple Dalek spaceships cruising around, you get the message loud and clear. There is an impending doom knocking on humanity’s door.

Having completed the intro tutorial level, you will be presented with your first puzzle. You must use your newly found sonic screwdriver to source components to create a signal booster in order for the Doctor to reach you. Upon successfully completing this, she will send the Tardis to your location. It is surreal to experience the whole “bigger on the inside” phenomenon in person. You can’t help but peek around the outside and then back in to see how it feels.

The only issue with this otherwise exciting experience is the fact that the Doctor was able to send the Tardis to you but not herself. If she can control the Tardis remotely, then why not escape wherever she is trapped and solve this problem herself instead of getting you to do it. How did she manage to lose her screwdriver in a dry cleaners anyway?

The goal of the game is to obtain three time crystals from three different locations in time. Each location is vastly different from the other, giving you some variety in the level design and giving you a better feeling that a trip in the Tardis is really taking you to a completely different time and place.

Piloting the Tardis is often quite comical in the TV show. Furiously pulling levers and twisting gears does not translate very well to the VR experience. You will have do perform similar actions but far less exaggerated. The game will signal what component on the Tardis dashboard you need to interact with and you have a short window of time to complete it. The experience is more tedious than fun as the prompts are often difficult to understand.

It always feels like the Doctor doesn’t really know what he/she is doing, somehow you, a person who has never seen a Tardis before, can fly it quite easily. The process would have been more fun if the Doctor just said “I have programmed the Tardis to take you to your destination, just pull the lever to set her off”.

Any time spent in the Tardis is time spent waiting to get out. This is partly due the piloting mini game but is also down to the design of the new Tardis. This isn’t a criticism that would be fair to make of this game, but rather the design of the new Tardis in general. With the last two doctors there was a feeling as if there are endless rooms and areas to explore. We know there was definitely a swimming pool. The new Tardis returned to the classic design with one single room. Doesn’t make it a fun place to spend time in.

Of all the monsters and enemies in Doctor Who, the Weeping Angels have become one of the most notorious enemies. They may not be as iconic as the Daleks but they sure have taken the community by storm. Creatures that appear as stone statues but only when being observed. When nobody is looking at them, they come to life and can move.

This game is not a light hearted Doctor Who adventure. This game falls further into the horror genre than anything else. Lots of jump scares and suspense. What else would you expect with the angels in fairness? Victorian London and Weeping Angels make for a pretty scary experience without needing to hear anything about the plot.

The majority of the gameplay involves exploration of an area and solving some puzzles. The exploration elements are quite dismal. You have one path to follow with practically nothing to do along the way and no way for you to get side tracked. You would expect a Doctor Who adventure to challenge you a little more and require you to make better use of the screwdriver to help find the way forward rather than it just being a railroad adventure that you can’t get lost in.

The puzzles can be tricky at times, but not in a way that feels satisfying. A puzzle where you need to attach colored plugs to a board was dull and senseless. The design of the board made no sense for starters. Who would put a complicated thing like this out in a forest to power a structure.  It broke the immersion by presenting something that just made no sense. They may as well have asked you to solve a rubix cube to turn the power back on.

It was very disappointing how little the sonic screwdriver needed to be used for puzzle solving. There is rarely a conundrum that doesn’t involve The Doctor whipping out the screwdriver to scan the area. All you seem to use it for in this game is to open doors. Puzzles should stump you upon arrival and it is only by scanning the area with the screwdriver that you get clues as to what the puzzle requires you to do. It would stop the game from feeling like it is holding your hand at every corner and also makes it feel more like a genuine experience you would expect from the TV show.

You could beat this game in about 2 hours, maybe longer if you spend as much time as I did hiding in corners so the angels wouldn’t sneak up behind you. Based on the limited room for you to explore the areas you visit, you wouldn’t really want much more. The overall experience feels like a proof of concept that was polished to completion. There are so many small things that would have made a significant difference. This may be the best Doctor Who game there is, but it falls short of being a fully featured game.

6.5/10
While Edge of Time is not perfect, there isn’t anything in this game to be overly critical about. It does a fairly good job at giving you an authentic feeling Doctor Who experience. There are some silly plot holes but nothing to ruin the experience. The sonic screwdriver plays a big part the TV series, but is not used to the same extent in the game and is the biggest let down. It feels like Edge of Time was a prototype that was polished to completion. Far too many elements of this game were not fleshed out enough to reach their full potential. You will still have fun playing this game, it is just a shame to see a perfect storm not end up with a perfect game.
Pros
Cons