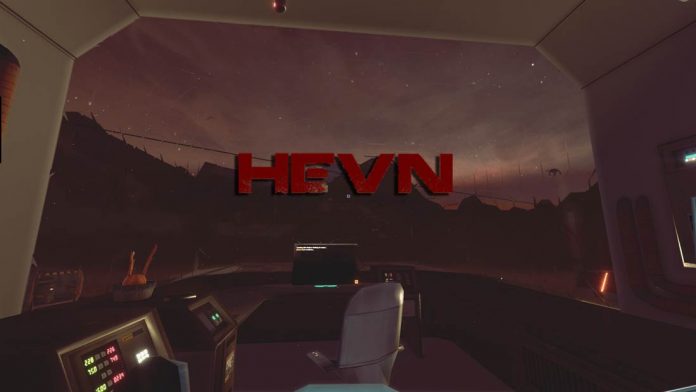 I recently got the change to take a look at an early preview build of an upcoming Steam Greenlight game called HEVEN. The game is a Sci-Fi game, based in the future where man has sapped up all of earths resources and has now taken to the stars to find new ways to survive. Check out the trailer below.

The game starts off with an intro that gives you an idea of what is going on. It would have been great to see this as some kind of narrated cut scene. Once you have a bit of a back story behind the reason for being where you are and the current political state, you can get started with playing the game.

As soon as you get started, you are thrown into an atmospheric space station that is suspiciously quiet. It immediately reminded me of the Nostromo from Alien. In fact, I may have found a face huggers long lost relative.

In it’s current form, there isn’t a whole lot to do other than explore. There is no real narrative or objectives. This wasn’t all that bad though. I did quite enjoy exploring and I feel there is some massive potential for this game. The station is just screaming for a mystery, which i really hope is something that gets added. For the moment, there does appear to be some sort of todo list. You are given a tablet to manage your day to day duties, but I didn’t know what the password was to access it. It may have been given to me, but there was no real strict progression which resulted in me missing out on collecting the tablet in the first place.

The games visuals are quite nice for something that is not yet completed. The hallways have dim lighting and feel quite lonely. With computer systems and lots of items to interact with, it really helps immerse you into the game. As I have mentioned, I am a sucker for some mystery in a sci-fi story. Where has everyone gone? Every step I took around the halls, I could feel questions knawing away inside my head. My interest has been very much tickled from the brief 10-15 min experience that was available to me.

With a solid story and some gameplay tweaks, this could result in being something along the lines of Dear Esther, but in space. I definitely suggest you check out the games greenlight page to keep up to date with the progress that is being made. Would be a shame of all the work that has gone into this game so far ends up going to waste.