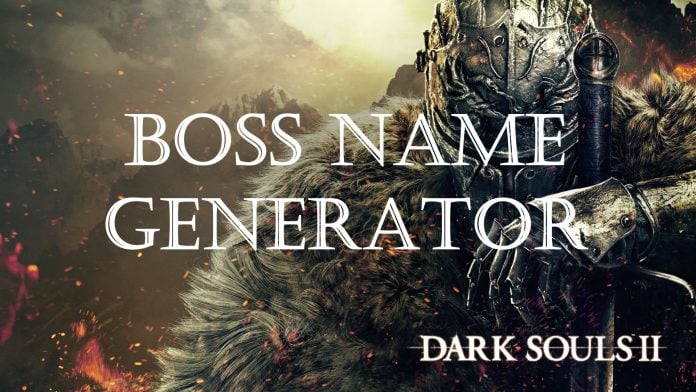 Dark souls is a video game that is known for its brutal difficulty and its dark tones. One of the bigger aspects of the game in terms of difficulty and scale are the boss fights. Dark Souls and any of the games in the Souls genre have some epic boss fights. Bosses are usually some sort of grotesque monsters or some kind of possessed monster which gives the bosses some very dark tones. For whatever reason, you might have it for, here is a Dark Souls boss name generator.

This will attempt to make some dark and monster-like names for you to use for any fictional Dark Souls bosses you might have created. Since bloodborne and likely any future games from FromSoftware will keep these darker and more evil tones, the names generated from this will likely remain useful.

To start generating name suggestions, click on the button below. It will keep coming up with random name suggestions that fit the darker style of the creatures in this awesome video game series.

With a large backlog of games in the Souls series, there is a large number of dark souls boss name ideas to draw from already by simply mixing up what the game has already provided us with. The dark souls boss name generator above will come up with lots of original ideas. The names are all randomly generated on the fly. Some of them may not be perfect but you can keep generating new ideas until you find something that you find interesting. If anyone has some suggestions on how to improve this tool, let me know. It would be cool to get some more detailed and specific name suggestions to build into this.

I have had the idea of building some art into this so that each suggestion from the dark souls boss name generator will give you a visual image that shows what the boss looks like. Unfortunately, art is not something that I am good enough at doing to be able to make this. If someone is willing to help out in this area, I would be delighted to write the code to make this happen.