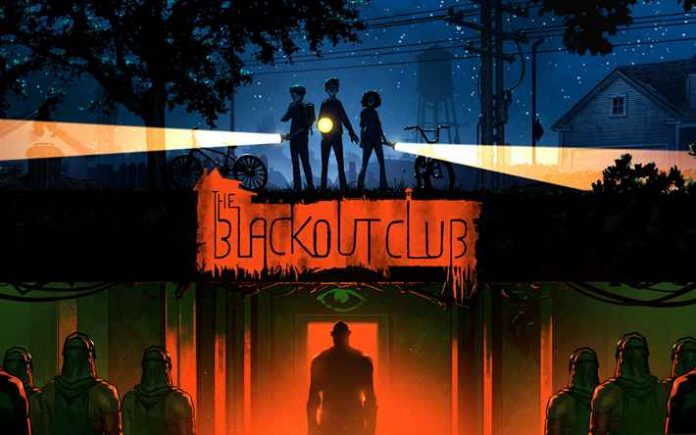 It is quite a common movie situation where the adults are oblivious to the impending danger and it is up to the kids to save the day. It is not a premise that is used very often in video games and it is something that makes the Blackout Club stand out from the get go as being a unique game with a certain charm that we don’t see too often.

Some sort of evil cult has infiltrated a small town and all of the adults are completely unaware of it. Come nightfall, all of the adults turn into sleepwalking drones who will roam the streets and attack everything they hear. It is quite entertaining to see people out roaming the streets of this small suburban neighborhood in their pyjamas.

Below the streets of this quiet little street are a series of man made tunnels known as the Maze. Within these tunnels are cultists who have a very mysterious back story. They have infiltrated the area and have some sort of mind control over the people. All we know is that they are to be avoided at all costs.

The children seem to be immune to whatever it is that is brainwashing the parents. Must be all that darn soda pop and rock ‘n’ roll! Since the children are unaffected, it is up to them to uncover the mystery and save everyone.

The premise is very strong. It will most definitely capture your interest very quickly. Unfortunately, it doesn’t do much to keep you hooked. For starters, there are some flaws in the behavior of the enemies. Most of the enemies, both parents and cultists are blindfolded. They rely entirely on sound. This makes stealth and sneaking super important. They will run after footsteps if you run. Why don’t they run after each other? There are parents bursting in and out of doors and it doesn’t attract their attention. It would obviously ruin the game if this happened, but it’s a huge logic flaw in the foundation of this game.

The Blackout club is an online coop game where you and three others must team up to complete a series of objectives during the night. Most of the objectives are based around uncovering what is going on. You will need to investigate break ins, blood stains and other strange goings on. You will also need to retrieve items from various locations and bring them somewhere. There is nothing too creative, the fun comes from having to sneak around and not get caught. The tasks could do with a bit more variety though. You will quickly become tired of the same sort of thing over and over.

One thing that is quite cool and interesting, and likely something most people playing do not take advantage of, is the games method of telling you where to go. When you close your eyes, you will see some red footsteps that highlight the way you need to go. You are obviously vulnerable with your eyes closed, so it isn’t something you will do unless you are in a safe spot and want to know where to go to next. Navigating the maze can be tough at first, this is incredibly helpful.

Closing your eyes also grants you another…ability. There is an enemy in the game called “the shape”. You cant see this enemy, but every now and then you will get a message to say the shape is coming for you. The only way to see where the shape is, is to close your eyes. It is a really cool concept and adds a huge amount of stress and fear. The shape you see with your eyes closed is just a red shape of a man. So, the shape is just some invisible man, it feels like it could have been something more than this.

Playing this game solo is incredibly difficult and is not enjoyable at all. As soon as you get downed it is game over. This isn’t a game designed for solo play, but it doesn’t do much to help you play with others either. With any coop game, the level of enjoyment will be dictated by the people in your group. Teamwork is absolutely essential and if your team does not work well together, you will not survive for long.

While it is very hard to play solo, you should never really consider it, even if it was easy to play. This game thrives on teamwork and it is so much more fun to play with others. The thrill of sneaking around when enemies nearby is something you won’t find very often. You will be on the edge of your seat, not moving an inch in real life as your in game character slowly sneaks past a cultist patrolling the area. It is incredibly tense and exciting at the same time.

With the huge focus on teamwork to survive, the game does not do much to make it easy for a group of new people to work well together. Quite often there are objectives to put up posters on the walls. There will be a number of items in bins around the street, normally 4 or 6. If one person collects them all, the rest of the team can’t do a single thing to help. That one person is now responsible for putting all those posters up.

Quest objectives need to be a team based collectable and not tied to the person who picks them up. Three people escorting one player just increases the chances of one person messing up and alerting an enemy. It also means that if one person picks up an item and forgets, the mission can go on forever. I have found on a few games, a player has the item and is oblivious as to what they must do. Makes things very annoying when they have no headset and continue to wander around aimlessly.

The Blackout Club contains a story, but it is quite hard to progress with it in a linear way unless you have a dedicated group of friends to play with. This is another way the game encourages solo play, something that it makes very difficult in other ways. The only way to progress with the story is to create your own game. This will let you go onto the next mission once the previous is completed. Come back two days later and you can continue on. This doesn’t work if you join random games. It does not track your progress through missions you complete in other games.

This was an issue with the Save the World game mode in Fortnite. You could have a good session with some players and get through 10 missions. Come back the next day and you could join a game with someone who is back at the start of the game. If you want to progress, you need to have a group of friends to play with. Friends who will not go on without you if you are away. If you do not have this, you will be doomed to playing the same missions over and over.

Character loadouts should be a critical part of a game like this. Being able to choose from a large selection of weapons, gear and armor to fit your play style. Blackout Club falls flat in this area. You will be very let down when you see the tiny selection of items you can use for your character. The stun gun is what everyone seems to use because it’s the only useful item.

There is a skill tree system that will allow you to spend the points you earn when you level up. These skills are useful as they can let you start a level with an extra bandage and other items. The problem is the limited amount of skills available.

The character building options in this game are incredibly limited and make XP seem pointless. Even if you fail a mission, you will earn some XP. It doesn’t really feel like much of a consolation as you know the stuff you get with skill points are not that significant. There is nothing that lets you make a character custom. Play a few games and you will find the same characters with the same clothes using the same loadout as you.

You will unlock some random items as you level up, but nothing significant. It takes an awful long time to level up. You must grind through the repetitive missions over and over to get to level 12 before you unlock the new area. For some reason, after spending a few hours playing I got to level 4. Next day I came back and I was level 1 again. I don’t know if it resets every month or something but this was really frustrating.

The Blackout Club manages to capture an atmosphere and charm that very few games can. The problem is that it does very little to capitalize on this. The premise is strong, the setting has a nice charm, the concept of the blackout club (the in game entity) is really cool too. All of the core creative aspects of this game are great and have huge potential. It just feels like a very early access beta and not a completed game.

The Blackout club is a great idea that is ready to explode with all of the potential it has. Unfortunately, the game falls short of tapping into this potential in many ways. The player base is small, so you wont find people pouring into your game if you create a public one. This means you need to have three friends who also have this game if you want to get any real enjoyment out of it.

Boring character load outs and limited character progression options will prevent you from getting hooked into this game like you would with other online coop games. Once you have experienced the same few missions over and over, you will be ready to call it a day. It’s a shame really, this game could have been so much more.

6/10
The Blackout Club has a lot to offer, but gives you very little. The game feels like an incomplete early access game. The missions are repetitive, the character loadouts and gear are very limited. You need to have a group of friends to play with. You can’t progress with the story by just joining in with random people. With all of the potential of the story and setting, it is a shame to see it all wasted with a poorly executed finish.
Pros
Cons