Strider is a side scrolling action game. The immediate comparison to make with this game is to compare it to Ninja Gaiden as the two games share a lot of similarities. Sadly kick-ass-awesomeness is not something that is present in Strider.

The game performs brilliantly. You press a button and you instantly get a response. This makes fighting a lot more rewarding if you can master the fighting skills quickly. The game is so smooth and sharp it’s a real treat to play a game like this. The developers managed to get great performance out of the Playstation 4. Responsiveness of the controller input is never really a big issue with games, but the level of accuracy and reaction times are incredibly sharp. If you find you are dying a lot you wont be able to blame the controls.

Visually strider is quite nice. There is a nice amount of detail in the backgrounds and even though there is a large amount of action happening on screen at once the game performs smoothly with no issues. There are very few negative things to say about the visuals, but at the same time there isn’t a whole lot of praise I can give the game either. For the most part textures are consistently average. They are clear and sharp, but don’t contain large amounts of detail to really cause any issues. The visual standard is set to the quality of a digital only game e.g.Crash Commando. They managed to create a game that looks great, but it would have been so much nicer if they had of gone for a more realistic feel that we get from other big games. 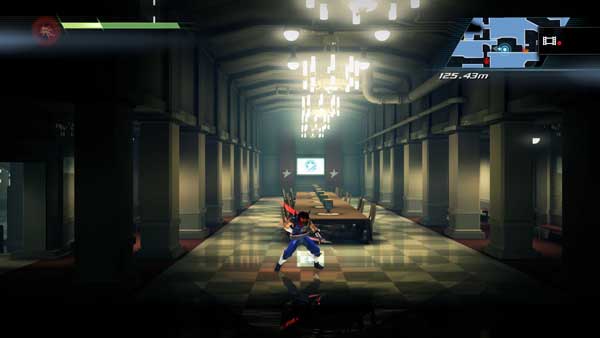 Getting to grips with playing the game can be tricky at times. I never came across much in term of tutorials, but your character can’t really do much at the start of the game so it’s not to hard to figure out. This was good to lower the learning curve, but it denied you access to basic moves and results in you having to button mash to kill enemies. A simple thing like a double jump isn’t available from the start of the game. You will need to progress through the game to unlock a lot of the abilities that you would expect a Ninja to have already. You possess the ability to climb up any wall and across ceilings by simply jumping at them. This is an unusual feature and since there is no tutorial. I was unaware of this ability which resulted in me getting stuck in an area because I didn’t realise I could have just climbed up the wall. The thing I really didn’t like was the inability to block enemy attacks. You have to jump out of the way of every attack, rather than parry and return an attack. This was a big let down for me since it’s quite difficult to play a game like this without being able to block. You would expect a ninja to be able to do things like this so it’s unusual.

The story for the game isn’t entertaining at all. You can’t skip the cut scenes so you have to sit through them all. Strider contains voice acting and also contains huge areas of text that obscure a lot of what you could see on the screen. I tend not to play games with the volume up high so I like to read the subtitles in the game. The problem here is the subtitles appear all the time, even while you are fighting. The box that displays the text is way too big and really gets in the way as you play the game. You really need to rely on your map for instructions on where to go as the story does very little in directing you. With the aid of a map I still found myself getting lost, with endless spawning enemies and no ability to block it gets quite frustrating when you are taking damage while running around the place lost. 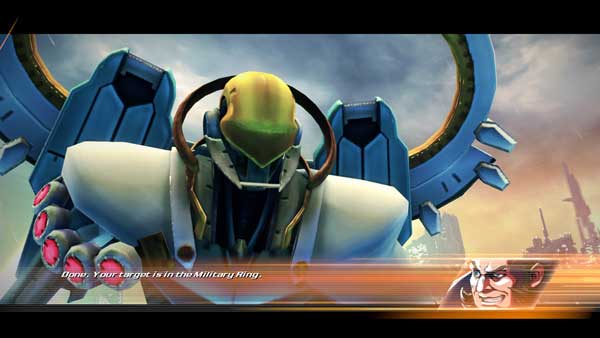 The shining light for this game comes during the boss fights. Like any good Japanese themed button mashing fighter, Strider contains boss fights. These bosses range from humans to giant robots that fly around the sky. The difficulty level on these boss fights is fairly reasonable for most of the fights, but I got quite frustrated later on in the game (Not being able to block drove me nuts!). The cool bosses did make up for the bland and boring levels. You have something to look forward to when you are playing through the levels killing the same enemies over and over. 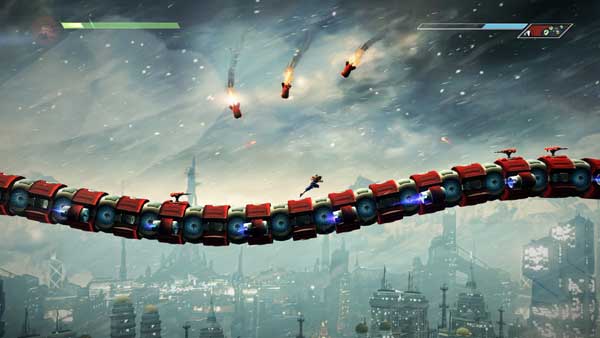 Strider is a good game, but it really wasn’t for me. I’ve enjoyed the games in the Ninja Gaiden and Devil May Cry series so I expected to enjoy Strider too. The 2D style of the game is what killed the fun for me. 2D games are great when the game remains a 2D game. Strider tries to be a 3D game with the levels looking as though you could run around them, but only allowing you to move left and right. The game performs really good and it’s credit to the developers for being able to achieve performance like this from the game. The inability to block attacks was an unusual decision and in my opinion a bad decision. You should be able to block attacks, you are meant to be a damn Ninja! To me Strider felt like a low budget game that shot too high. The developers made the most of it and produced a fine piece of work, but it still feels like it was made to a budget and lacks the edge that we have seen in other games in the same genre. With a little more time and money Strider could have been a huge hit, rather than an average button mashing, action game.

6.5/10
I don't feel the game worked very well as a 2d platformer when compared to games like Ninja Gaiden. There were too many times where the lack of a 3rd dimension made dodging attacks near impossible and the camera in general just got in the way of things. Strider is a good attempt at making a 2d game similar to the modern Ninja Gaiden games and would have been quite good had it not have been a 2D game.
Pros
Cons