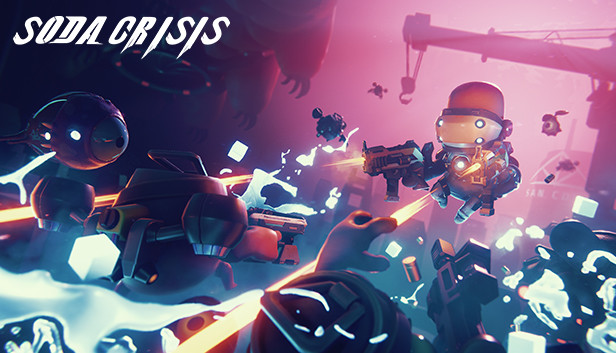 Soda Crisis is one of those games that is sure to lure you in with the trailer. Metal Slug style side scroller fun with some high flying acrobatic moves that ooze awesome but does the game fully live up to this or is it all flash and no substance?

It takes no more than a minute for you to get wrapped up in the hectic combat of Soda Crisis. You will be immediately entertained and brimming with the excitement of what is to come. No extended tutorials, you are thrown straight into the depths of combat in a trial by fire. With such intuitive controls, it’s all you need! The on-screen prompts are all you need to blast your way to the boss.

Then the intromission ends and you are dumped into a bog-standard, box-checking tutorial. You can’t complete the intro mission without learning how to shoot, dodge, jump etc. Yet for some reason, it seems appropriate to make you go through a boring tutorial to learn all of this again. It absolutely crushes the wild buzz you built up from the opening mission.

After about 30 minutes you will realize the tutorial ended without you noticing. The series of rooms with tutorial objectives never went away. You just no longer have anything to learn. Kill the bad guys and get to the next room. Absolutely nothing wrong with this but after the fun of the intro mission, the huge drop in pace and excitement feels quite disappointing.

Despite it being rather unclear and confusing as to what the level style of this game is, one stands out like a diamond in the rough. The controls are snappy and sharp. Once you work up a little skill, you can pull off some incredibly slick moves. Zipping and sliding across a level, blasting enemies before they know what hit em’!

It can be a little unforgiving at times however with some of the platforming requiring such extreme perfection that you could find yourself stuck repeating the same level over and over because a jump is just so difficult to land. There also appears to be quite a bit of controller lag, which further hurts those areas that require such precise, well times movements.

Achieving perfection with the platforming and anticipating the enemies who are going to come your way does give a lot of satisfaction and for some, this may be all you need to have an enjoyable experience with this game. It does not provide much depth, however. With little to reason to see more, you may start to get bored of this game.

The fun metal slug style experience that you dipped your toe into is pulled away from you and instead you just get small levels with simple objectives. Repeating the same process in every room, over and over until it starts to become unclear why you are still playing the game. There is nothing that will hook its teeth into you, driving you to the end.

Soda Crisis has the building blocks to be a truly top-notch side-scrolling shooter. The action and platforming are a lot of fun and have been expertly implemented. Where the game falls short is having any sort of purpose. Tiny levels with no connection between them just make this feel more like an Angry Birds-style mobile game than the larger, more fleshed-out action-adventure that it should have been. Not a bad game but a real swing and a miss with so much wasted potential.

6/10
Soda Crisis has all the makings of an epic, modern tribute to some classic action side scrollers like Metal Slug. Instead of building a bigger, badder experience, you will get some slick controls and high octane combat smushed into tiny levels that never work together to build a larger picture. Soda crisis is just a series of mini levels, no better than the likes of Angry Birds but is presented with the guise of a fully fleshed-out action-adventure. Once you get stuck into the meat, you will find there is very little on offer here after the first 30 minutes.
Pros
Cons